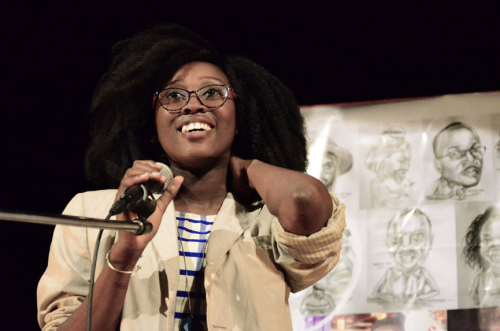 Felicity was born unhappy. She was conceived when her parents were young and unmarried. They wedded immediately then proceeded to use religion to punish themselves for as long as she lived with them. There were evening prayers filled with loud supplications to God to forgive them while she knelt there feeling every inch the mistake that they perceived her to be. There was the remittance of fifty percent of their income to the church, so that she never got those new shoes or money to go on the class excursion to Olumo Rock.

She grew up unhappy, too; sharing a tiny room with an older cousin who carried out the frustrations of being unemployed in a thriving city on her—slaps and kicks that left marks long after the physical scars had healed. Even when she ran away from home at nineteen—her bag heavy with money she’d stolen from her family—she remained unhappy. She paid for an apprenticeship at a tailor’s shop where she excelled. When she became assistant boss after a few years, she promptly poached all her employer’s good tailors to start her own business. But even then happiness eluded her.

Today, Felicity is a tall woman of forty-five with big feet and round shoulders that hunch forward. Her mouth is downturned and her thin bottom lip juts out, giving her a permanent look of one who has tasted something bitter. She is still unhappy and her tailors sometimes attribute her constant displeasure to her unmarried status.

“If man for dey, shebi im go dey smile?” They whisper among themselves.

From “Birdwoman” in Omenana

‘Pemi: “The idea of ‘Birdwoman‘ came from a newspaper article I saw in Lagos. The news story is that a bird flew into an electric wire and, when the bird fell, it turned into an old woman. They were taking her to the police station and I didn’t understand that, and so I decided to write a story from the woman’s perspective, you know, how it is that she would somehow have ended up in that form and the possibility of her not even being aware that that was going to happen.”

I interviewed ‘Pemi right after our Ake Festival panel on horror fiction, so the interview was snatched on the hoof. Hence this piece is much shorter than the usual piece in 100 Africans. I mentioned that Chinelo Onwualu had said on the panel that the story was about poverty. I asked if ‘Pemi could speak about some of her themes.

‘Pemi: “The other thing that jumped out while reading the newspaper article was the fear of the Other. I guess it ties into what Chinelo was saying, especially towards the end of ‘Birdwoman,‘ where people react to this strange and unknown thing with violence because they do not understand it. So, there’s a poverty of understanding, and of empathy. The story is also about not being comfortable in your own body. The woman has lived her life unhappy in her body, and then she gets this opportunity to be a bird—which gives her temporary happiness—but that obviously ends in tragedy.”

GR: “Do you think that’s an experience more women have than men?”

We talk about body image in the media, but we get back to her story. I compare it to Edgar Allan Poe’s definition of a short story—it can be read in one sitting and works on multiple levels, as I felt her story did. Does she have a favourite among her stories?

‘Pemi: “Huh. I don’t know that I have a favourite, but with ‘Birdwoman,‘ I felt it. You know there are some stories you write, where you sit and it just comes out? I felt sad when I was writing it. It was a combination of it being relatively easy to pull out at and my visceral reaction to what I was writing. When I started the story, I didn’t have an idea of all the different parts, but as I was writing it I felt for this woman in the story. It was a strange reaction. Usually, I have an idea and I know what I’m trying to convey, but, with this one, there was this gut-level reaction that came with writing it that still stays with me. It is one of my favourite stories, but I don’t know that I have an absolute favourite.

“Before I started getting published in magazines, I used to write a lot of stories that were speculative, darker fiction, but recently the stories I’ve been writing haven’t necessarily been.”

I ask for some examples.

‘Pemi: “‘Caterer, Caterer‘ in Munyori Journal. [That story won the 2017 Writivism Prize. Another of her stories is also available on the site.] ‘Smother,‘ really short, maybe a page or two in Saraba Magazine, ‘This is Not Our Way,‘ that’s in Black Fox Literary Magazine [use screenreader for Issue 11, Winter issue, 2015], ‘Karuwa‘ in Prufrock Magazine. Thinking of one more. Ah-ha! It’s speculative too, but it’s in print, not online: ‘Ama and Ado.‘ It’s in The Wrong Quarterly.”

At that point, the power cuts out. So we continue talking in the dark.

GR: “When did you start publishing?”

‘Pemi: “In 2011, I started writing a fiction column on a website called The Naked Convos. I started submitting to magazines around then. It was also the year I attended the Farafina Trust Creative Writing Workshop. So, I would say around 2011. I started out writing spec fic, but when I started sending out stories, it was realism (laughs). And now, I’m back. For now.

“There was a time I wrote only flash fiction. ‘The Passenger‘ was about a man and wife driving to church. They feel a presence in the car, and the story is about how they both can’t see anybody but they feel that insistent presence that eventually pushes them to abandon their car and flee. The story ends with a little girl on the street pointing at the car asking why they have left the old woman in there. (Chuckles)

“‘Ama and Ado,‘ I’d like to edit, maybe rewrite, because I could probably do it better now. I like the idea but I’m not sure about my execution. Um. It’s about an author who writes a totally fictional story. She visits her publisher who tells her that the characters in her story have shown up to make a complaint about how they have been portrayed in the story. And she had no idea that they existed. She meets them and they are exactly as she described, down to their smell.”

I ask her if she is working on a novel. She says, “No (chuckles). I’m not quite sure I can sustain an idea the length of a book yet.” I ask her age; she’s young; I tell her she has plenty of time to figure out how to sustain a novel. Edwin Okolo in his interview talks about how much her writing for The Naked Convos inspired him. I ask ‘Pemi about her early reading. Did she read fantasy as a child?

‘Pemi: “No. I read a lot, but I didn’t start reading speculative fiction until ‘adulthood’—in quotes—though I don’t know if I’m an adult yet (chuckles). Not even novels, it’s just the short stories that were available to me and that’s what got me into speculative fiction. The very first book I read that wasn’t quite realism was Ngugi’s (wa Thiong’o) Wizard of the Crow, and I found that I go on about that book till today. It was one of the books that made me say, ‘Huh, here’s one way to talk about real life events…‘”

GR: “Ha! Fantasy is a way of writing about real life.”

Some other online writing by ‘Pemi Aguda:

“Naming” on The Naked Convos 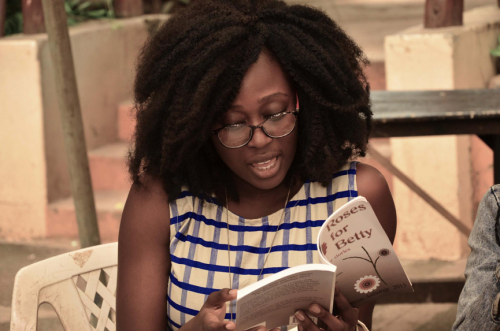