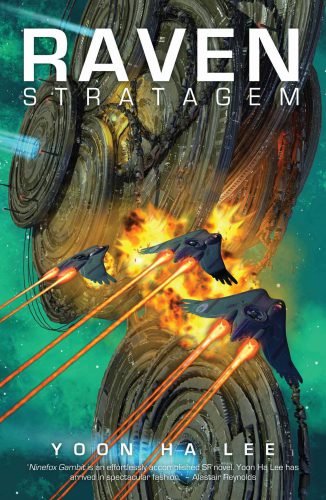 I adored Yoon Ha Lee’s debut novel Ninefox Gambit (2016), and it garnered a well-deserved Hugo Award nomination this year, so clearly other people adored it too. There’s always the question with sequels of whether they will live up to the first book in the trilogy. Happily, Raven Stratagem delivers more of Lee’s signature mixture of military matters and mathematics in spades.

Ninefox Gambit introduced us to Kel Cheris, an infantry captain with a genius for advanced mathematics whose unconventional thinking unfortunately attracted the attention of Kel Command, which takes a very dim view of that sort of thing within the military faction. Cheris wound up playing corporeal host to the disembodied revenant of Shuos Jedao, the four hundred years undead general who was one of the hexarchate’s greatest military geniuses and also one of its greatest mass murderers. They were taxed with stamping out a particularly pernicious group of heretics, a matter of vital importance in an interstellar empire where mass belief in the calendar (and the ceremonial torture sessions and remembrances of the same that keep it running) literally powers the exotic technologies on which society depends. The most significant of these is the mothdrive that makes faster than light travel possible, but the term also encompasses much of the hexarchate’s advanced technology, including its military formations and weaponry.

Needless to say, things didn’t exactly work out as Kel Command or the hexarchate envisioned, and the Hafn, a rival interstellar polity, are now keen to take advantage of the hexarchate’s perpetual frailty and of the convenient fact that their own exotics work under the hexarchate’s calendar. The book opens with Kel General Khiruev about to take her swarm to the border to deal with the Hafn threat; Khiruev herself is noted for a borderline dangerous level of flexibility, but it’s her subordinate Colonel Brezan whose lack of formation instinct plays a crucial part in the book’s opening scenes. “Formation instinct” is the term for the groupthink installed into cadets’ minds at Kel Academy, allowing them to execute the military formations that create exotic effects in battle but also inexorably subordinating their individual wills to the hierarchy of command. Shuos Jedao’s commission as a Kel General was never revoked, and Jedao is able to use formation instinct to essentially take over Khiruev’s swarm once he makes contact with it: after all, he has about four centuries’ seniority on every other officer in the service.

The military aspects of the story are well-matched to Lee’s prose, which pairs the occasional and memorably poetic turn of phrase with the blunt, fatalistic attitude of military personnel and their jokes. Here, for example, is Khiruev’s reflection on the eve of a certain battle: “There was no such thing as a routine battle, something Khiruev had figured out as a lieutenant decades ago. Even so, certain rituals made the chaos manageable. More accurately, they gave you the comforting illusion that the plan would have any relationship to reality when reality decided to stab you in the eye.”

Raven Stratagem deepens and expands the universe of the hexarchate laid out in Ninefox Gambit, as military manoeuvres recede into the background and senior Kel officers—unlike Cheris, who was an infantry captain breveted to general for the sake of the hierarchy—with different perspectives on Jedao, the Kel, and the hexarchate itself come to the fore. Thanks to the hexarchate’s unimaginative attempts at intimidating Jedao, we also get a glimpse of Cheris’ birth world and her doomed ethnic minority community, the Mwennin, with their own unique language and customs and stories, including that of “the raven general who sacrificed a thousand thousand of his soldiers to build a spirit-bridge of birds to assault the heavens.”  There’s more about families too, from Cheris’ parents to Mikodez’s surgically altered lookalike brother Istradez and Brezen’s bedeviling older Kel sister.

There’s a way in which the book works as a kind of puzzle: the reader is presented with a series of situations in which they know different things than the characters, and as the book unfolds we are challenged to use our knowledge to try to work out just what is going on: what has happened to Cheris? Whose estimation of what Jedao is trying to do is correct, ours or the hexarchs’? What does Shuos Mikodez think he is doing, and what is he actually doing? In the first book, working out much of the worldbuilding felt like this, particularly if readers were not previously familiar with the hexarchate from several of Lee’s earlier short stories, including those in the collection Conservation of Shadows. In Raven Stratagem, much of the calendrical warfare takes a back seat to other questions, specifically the warfare of hearts and minds: the hexarchate adopts various strategies, including genocide, to try to bring pressure to bear on Jedao, while Jedao proves to be disconcertingly willing to fight the Hafn and thereby protect the hexarchate, presumably to convert the hexarchate’s denizens to his banner.

One thing that is clear to just about everyone in the book is that the hexarchate is a terrible place to live and an even worse polity to serve. I found myself thinking of Ann Leckie’s Imperial Radch more than a few times. Both trilogies feature unapologetically imperialist interstellar regimes powered by an extremely casual attitude towards human life (for the Radchaai, it’s auxiliaries; for the hexarchate, it’s institutionalized ritual torture and executions, and the casual attitude towards life in general that they breed). Both feature protagonists who are trying to bring down the system, or at least create enough of a chink in its armor to allow for the possibility of positive change: the hexarchate, after all, used to be the heptarchate, but the general consensus is that everything has only gotten worse since Jedao’s day. There’s also questions of functional immortality at play in both trilogies—Anaander Mianaai has it; the hexarchs as a group want it—and a certain amount of questioning the gender binary: Radchaai imperialism extends to imposing female pronouns on everyone in their society, while in Raven Stratagem the default seems to be people switching gender and their biological sex at will, with pronouns left to their own choice accordingly. Brezan, for reasons which seem to be related to class or status, has elected to retain his “womanform” body despite his male gender. Artificial intelligence—the ships of the Radch, the servitors ubiquitous throughout the hexarchate—is also a key shared theme.

If the problems of empire are clear in both universes, the solutions characters come up with are ultimately different. One of the key characters in Raven Stratagem is the Shuos hexarch Mikodez, whose disdain for the prospect of achieving immortality was a throwaway line in Ninefox Gambit but takes center stage in this book. Through Mikodez, we learn that in the interval the sinister, near-immortal Nirai hexarch Kujen has vacated the scene and his successor has implemented plans to give herself and the other hexarchs eternal life. Mikodez isn’t wild about the hexarchate on the best of days, and he’s convinced—with good reason—that giving the hexarchs immortality will cause more trouble than it’s worth. Given the fact that Nirai Kujen, the hexarchate’s premier calendrical mathematician (and sometime co-conspirator to Shuos Jedao), seems to have been manipulating the calendar to keep himself alive for nine hundred years, Mikodez appears to have a valid point. Moreover, Kujen agrees with him: “Immortality didn’t turn you into a monster,” he reflects towards the end of the book. “It merely showed you what kind of monster you already were. He could have warned his fellow hexarchs, but it was going to be more fun to watch them discover it for themselves.”

In any revolution the question at some point must be asked about what comes after—and is it possible that it might just be worse than the status quo? Jedao and Cheris faced this question in the last book, and it’s their unwelcome gift to the people they encounter in this one. Kel Brezan, for one, is eventually given the choice of whether or not he wants to fight for a system in which he can’t fully participate due to his status as a crashhawk, a Kel who lacks formation instinct. As with many terrible and momentous choices in life, Brezan keeps having to make his again over the course of the novel, particularly after he learns about Khiruev’s choice to serve Jedao of her own free will, despite it being a physiological death sentence thanks to formation instinct. Throughout, the humans’ choices play against those of the servitors, the mostly ignored but fatefully omnipresent sentient robots whose perspective on their masters increasingly seems key to the hexarchate’s fate. As Khiruev realizes, they have the facts and have drawn their own conclusions independent of human interference or oversight: “Most people gave servitors less thought than the wallpaper. If they had wanted to slaughter humans in their sleep, they could have managed it forever ago. It spoke better of them than the humans.”

Like the solution to the best puzzles, there is a certain inevitable logic to how the whole thing plays out, both against and with our expectations. Lee’s writing has some of this same quality, which is part of what makes the mathematics and the characters whose lives depend on the mathematics so compelling; his crisp prose helps the reader to grasp the ramifications of the calculations even when the underlying equations remain obscure. Ramifications look to be on tap for the final book in the trilogy: as one character observes, “ … people didn’t stop being people because they had choices.” I for one can’t wait to see what final scenario those choices generate.