Reviews
Size / / /
A Conspiracy of Truths by Alexandra Rowland
By: Electra Pritchett 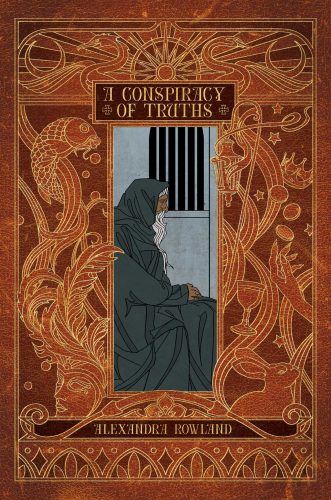 I picked up Alexandra Rowland’s A Conspiracy of Truths because the elevator pitch, “a fantasy of fake news,” seemed to be right up my alley in 2018. What I got in the novel is definitely not quite what I expected, but it’s an engaging and interestingly offbeat fantasy tale all the same.

The novel opens in a courtroom in the far northern country of Nuryevet, where itinerant storyteller and semi-mendicant Chant is on trial for “something stupid,” namely, witchcraft (p. 1). Chant’s name is actually a title: as he tells his advocate Consanza, “it marks me as a master of an order that goes back more than four thousand years” (p. 23). The Chants are the descendants of the priests of a drowned land, who now “pass on the knowledge of what once was” so that it may live in memory at least (p. 26). Chant is old, irascible, and unimpressed by Nuryeven justice. Unfortunately for him, he’s suspected of being a blackwitch, which is very much a bad thing for him to be. Even more unfortunately for him, the world-famous mariner he tries to invoke as a character witness was executed in Nuryevet for being a shameless pirate, which is a personal blow to Chant on multiple levels. Many of the truths we cling to depend greatly on our own point of view.

Strangers to Nuryevet, Chant and his apprentice Ylfing are at a serious disadvantage when it comes to trying to win his release. Although Chant manages to get his charges commuted to spying instead of witchcraft, he quickly learns that that’s not really any better. It does, however, put him under the jurisdiction not just of the Queen of Justice, normally responsible for criminals, but also of the Queen of Pattern, who is allowed to question anyone accused of treason or espionage. Once Chant realizes that there are multiple competing power centers in the Nuryeven political system, he realizes that the only recourse he has to escape is to play them off against one another. How he’s able to do that from his jail cell, with the help (witting and unwitting) of a varied cast of people, is the plot of the book and its fun.

A Conspiracy of Truths definitely is fun. Chant is unquestionably a grouchy old man, but as he’s the direct narrator of the story, the reader gets more than enough time with his viewpoint to understand where he’s coming from in terms of grumpiness—it’s cold in most of his jail cells. His apprentice Ylfing makes a good sidekick, his puppy-dog youth and eagerness leavened by his commitment to the Chant calling, even though he doesn’t know everything about it quite yet. For what is in some ways a variation on a locked room mystery (Chant does change jails and jailers several times, but spends almost the entire book a prisoner in one form or another), the events of the plot are rollicking, from a political revolution to an economic collapse and a foreign invasion.

Nuryevet is interesting too. For some reason I couldn’t stop myself thinking of the country as fantasy Greenland, on account of the fact that the country is very far north, cold, and dull, at least in Chant’s eyes. (Sorry, Greenland.) But the Nuryeven political and social systems have nothing to do with actual Greenland, and are in fact intriguingly different from a lot of standard fantasy worldbuilding. Group marriages are the norm in Nuryeven society, and become ever larger as families seek to avoid tax burdens and share various social benefits to get ahead. Several centuries ago, the Nuryevens overthrew their final monarch, and now they elect five co-equal monarchs to head the five departments of government: Justice, Order, Pattern, Coin, and Law. Mostly, the Primes who head these departments spend their time in political maneuvering, and Nuryeven civil society is not exactly indicative of a robust democracy.

The Nuryeven characters are extremely relatable—many of them personally decent, but all too willing to let the abuses and injustices perpetuated by the Nuryeven system of government go unchallenged in return for their own and their families’ personal comfort, or committed to the system because they’re unable to see the inequalities that sustain it in the first place. Chant himself is under no illusions about Nuryevet, or about any of the bullshit involved in a society; indeed, his job as a storyteller is mostly manipulating illusions, whether they be fairy tales or monetary systems or social consensuses:

I should clarify. When I say “Nuryevet” here … How do I describe this? Nuryevet wasn’t a real thing—it was a story that people told one another. An idea they constructed in fantasy and then in stone and mortar, in lines of ink in labyrinthine law books, in cities and roads. It was a map, if you will, drawn on a one-to-one scale and laid out over the whole landscape like so much smothering cloth. So when I say there was nothing in Nuryevet worth saving, that’s what I mean: the story wasn’t worth saving, and none of its monstrous whelps were either—the government, their methods, the idea that they could feed their poor to the story like cattle to a sea monster so the wealthy could eat its leavings. And not only the wealthy. Even the well-to-do like Consanza and her family, who could afford coffee, good foreign wine—hell, meat. That came about because of people like Ivo and his family paying taxes for schools they never saw built and roads they only saw maintained for the good of the tax caravans. You’d never see someone like Consanza thinking to change anything. She’d told me outright that she wanted a cushy desk job in Law or Justice; she wanted to do the bare minimum she needed to get by, and of course that left no room to care about anyone but herself.

Perhaps it is unfair of me to lay any blame at her individual feet—it’s not as if every aspect of her life was the result of simple good fortune. I bring her up only as an avatar, an example, a symptom of Nuryevet’s sickness. She, like many other people, was in a position to do something; she had the means, the education, the social standing. And yet her highest concern was to avoid as much real work as possible, and to protect and advance herself. To kiss ass like never before, and to win herself comfort, ease, and security. She had even balked at helping me in any way that might hurt her chances, and I was her job. (pp. 200-01)

Just because this wasn’t the fantasy of fake news that I was expecting doesn’t mean that A Conspiracy of Truths didn’t feel uncomfortably relevant at times.

Fantasy as a genre is certainly good at depicting societies that are in need of a good revolution, but it seems to me that Rowland’s take on the matter of whether Nuryevet is worth saving is unusually clear-eyed. Nuryevet is by no means the worst society in the world, particularly if you have sufficient means to avoid being caught up in its unequal justice system. It’s certainly very far from the worst societies in fantasy, and yet all the same it’s better in Chant’s view to try to overthrow it than to try to excite reform. Perhaps the fact that overthrowing the political order is his best route to winning release from prison is itself an indictment of the same; it shouldn’t take such extreme measures. It shouldn’t, and yet it does. A little revolution, every now and then, is a good thing.

But Chant is a stubborn old coot, and he’s not afraid to twist the truth and illusions to his own ends. Much of this twisting of truth and lies comes in the form of the inset stories scattered throughout the novel, which Chant and Ylfing tell sometimes to inform, sometimes to make a point, and sometimes just because they’re good stories. This isn’t a common technique in fantasy—off the top of my head, Megan Whalen Turner’s The Thief (1997) is the only other book I can think of that employs it—perhaps because it’s difficult to do well, but Rowland emphatically pulls it off, with the tales varying believably in their register depending on who tells them, what they are, and to what the teller’s purpose is. I thought the last, interrupted tale was the most effective, but to describe it would be a spoiler, so instead I’ll just say that the recurring stories about Ger Zha, a female general in the service of the Empress of Genzhu, were particularly fun. And while the tales themselves enrich the narrative, they also allow Chant to draw on other resonances in telling his story about his sojourn in Nuryevet.

The novel itself is a story, and for her first and final metafictional trick Rowland writes the entire book as a story that Chant is telling to someone in particular. That person’s identity is very much a central question, and its urgency only increases as the novel proceeds, another part of the story’s compelling power—I thought I’d read the book over a week and instead finished it in two days. A Conspiracy of Truths doesn’t directly depict our current fake news political hellscape, and it doesn’t provide a blueprint for how to get out of it. But as Rowland’s novel makes clear, stories are their own justification for existence, and the work of changing society belongs to all of us.