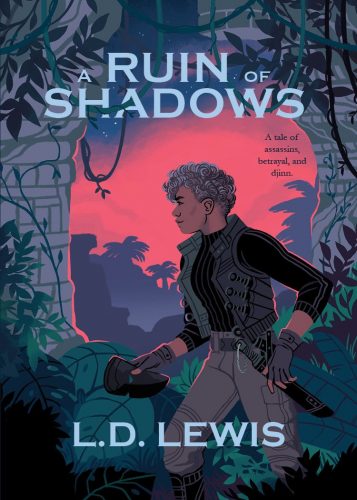 A Ruin of Shadows, a novella written by FIYAH Literary Magazine’s art director L. D. Lewis, is easily at the top of my favorite reads list at this point in 2018. Brilliant and breathtaking, Lewis’s first novella is a multifaceted piece of fiction set in the central city of an empire that has shown no sign of slowing down on its hunger for more colonization, and focuses on the empire’s main weapon in its fight, General Daynja Édo.

To the citizens of the widespread Boorhian Empire, General Édo is famous for two things: her incredible successes in battle and the full-body armor that renders her nigh invulnerable when she’s wearing it. Both of those things are attributed to the black stone mask that appears to serve as the catalyst for the armor, simultaneously building up Édo’s legend as a unique power in the empire while causing many of the people in power to view her as potentially replaceable.

One of the main things that A Ruin of Shadows grapples with is the reality of empire and complicity in it—or, in the case of General Édo, active participation in colonization and the violence it entails. It shows a tool of the empire having the slow-dawning realization that the nation she’s lived and killed for across several decades has made her into something that she was never meant to be. Édo never outright calls herself a monster, but during the novella’s first section, she is rattled by the fact that she can’t remember how many people she’s killed. While the members of her Shadow Army—a group of seven young Boorhian citizens that she trained over several years to follow in her footsteps—all report their kill count with a bright glee, Édo struggles to put numbers to the battles she has won over the years, at one point thinking “Were there really over two hundred lives there?” about a battle in her distant past before she’s interrupted by the mysterious Djinni, who is perhaps the only being in the vast Boorhian Empire that genuinely cares about Édo and who serves as a source of humor and information through the novella. The section ends with Édo reaching for pen and paper in order to finally have a tally of the lives she’s taken, but it signifies the first crack in the metaphorical mask that she wears in her role as the general.

The second is her refusal to kill the new Queen-Saint of the pacifist country of Eros when the Boorhian emperor orders this of her almost a third of the way into the story. By this point, we know that the Boorhian Empire occupies much of the world as Édo and its citizens know it. Eros is a tiny island country with a ruler whose primary purpose is to talk to the gods that the Boorhian Empire has long since stopped worshiping. But it is one of the few countries not underneath Emperor Negus’s thumb, and that makes it a threat to the emperor—but not the empire. Édo‘s pointing that out, as well as her refusal of the order to decimate the Queen-Saint and her people, then makes her a threat to the empire that she’d fought for since she was a teenager and to Emperor Negus—who she’d practically grown up with. That the emperor and empire have no respect for Édo despite the fact that she built them both serves as one of the main catalysts for her rebellion.

An aspect of A Ruin of Shadows that I found fascinating is how the novella’s themes of family and betrayal intersect with the previously mentioned themes of empires seeing citizens and soldiers as replaceable cogs in their massive machine. Part of Édo’s legendary status in the Boorhian Empire comes from the seven members of her Shadow Army who have fought alongside her for several years and learned from her, but Édo doesn’t see them as “mere” soldiers. At the start of the novella, Édo even refers to herself as the Shadows’ “matriarch” and views them as the closest that she’ll ever get to having children of her own.

Unfortunately, the Shadows don’t feel the same way about her, considering how quickly they turn on her, choosing to try and save themselves and build their reputations over standing by Édo. Everyone in the empire seems to see Édo as a means to an end, a tool to be used, or a legend to dethrone. The Shadows, who were taught everything they know by their general are no exception.

While Édo is downright parental in some of her musings about her Shadows, there remains a core of steel to her character’s interactions with them that only solidifies further once she begins to realize that they don’t see her as anything more than a means to an end. The second that One—her first Shadow—dares to lecture her about her duty to the emperor and how their fates as Shadows are tied to hers, on top of demanding that she step down if she’s not willing to do her duty, not only does she respond to him with a sharp threat (“If you ever speak to me again without your sense, Waahid—One—I will flay you alive and feed you your own hide. Doubt me.”), but she leaves the conversation fully aware that at some point, he will attempt to betray her.

Except, she doesn’t seem to expect all of her Shadows to turn on her until it’s already begun, with Lewis writing a tense exchange between Édo and Four that gave me chills the first time I read it:

“Was it so easy for him to turn you all against me?” Daynja asked. Knowing they might have at least been conflicted about it would have been nice.

“We were always of Boorhia, General. You turned against us.” Four replied.

So that was it, then. Daynja’s hubris allowed her to hope the Shadows might—perhaps not love—honor her in some estimation close to the Empire. She’d been wrong.

“Fair enough,” Daynja nodded. “I don’t suppose you have capture, not kill orders, then.”

“You have nothing more of value to Boorhia.”

Unlike Édo, who was found in the Hinterlands and only came to Boorhia after Os Vazios’s colonization of the country decades before, the Shadows are all young adults born in Boorhia. Despite their relationship with Édo, their loyalty to emperor and empire never wavers. In fact, Four, One, and Two all remind Édo at various points that despite the work she’s done for the empire, she’s still an outsider in a way that they’ll never be and that even though she’s considered herself more or less “one of them,” she never could be.

Édo is part of the problem of the Boorhian Empire. She’s been killing “for the greater good” for around thirty years and, as far as we know, this is the first time she’s ever questioned her kills or rejected an order to kill someone for the empire. However, the very moment that she does these things, she is smacked back to “Outsider” status, down to what they think her place is. Additionally, with the way that the Shadows instantly turn on Édo once they get new orders from the emperor and other men in charge, Lewis is able to showcase the fleeting nature of loyalty in Édo’s position in a way that leaves you feeling the sting of betrayal with every time that one of the Shadows tries to take her down in order to get their hands on the mask they believe will grant them her impenetrable armor. It’s hard to mourn the characters that Édo kills because, due to the novella format and the number of Shadows, it’s not as though we got that much time with them and Édo before things get pear-shaped, but Édo’s fights with them leave her wounded internally, and Lewis makes sure that we feel every bit of her sadness and frustration with every Shadow that Édo loses to their own ego (and her weapons).

Talking about Édo’s Shadows brings me to my actual favorite thing about A Ruin of Shadows: Lewis’s amazing fighting scenes. While the first two-thirds of the novella deal more heavily with political intrigue and Édo’s interactions with Djinni and other people from her more immediate past, once Lewis has Édo get into the mindset to do battle with her protégés, you can see her already vivid writing take on another layer of intricacy. Édo makes rather short work of most of her opponents, but every fight scene in A Ruin of Shadows is brutal—especially one scene that ends with her second Shadow, Two, being, well … dismembered in a relatively non-graphic way.

Lewis is a wonder with her words, spinning a novella that is strong enough to keep me rereading it long after my interest in other novellas would’ve waned. A Ruin of Shadows makes me crave further works following Édo’s life after the end of the novella because it just has that much potential and power packed into every page. Her writing is vivid and expressive, all of her characters are eye-catching even in the short time many of them are alive, and the worldbuilding choices she makes with regard to the Boorhian Empire are intriguing.

Like Loading...
© Copyright 2018 By: Zina Hutton
About Zina Hutton
Back when she was a child, Zina Hutton jumped out of a window to escape dance class in the Virgin Islands. Now she tends to leap headfirst into new stories and worlds as inspiration strikes. Zina currently works as a freelancer with publication credits in Fireside Fiction, The Mary Sue, Strange Horizons, ComicsAlliance, and Women Write About Comics. You can find her at Stitch's Media Mix and on Twitter as @stichomancery.
No comments yet. Be the first!