Reviews
Size / / /
A Spy In Time by Imraan Coovadia
By: Gautam Bhatia 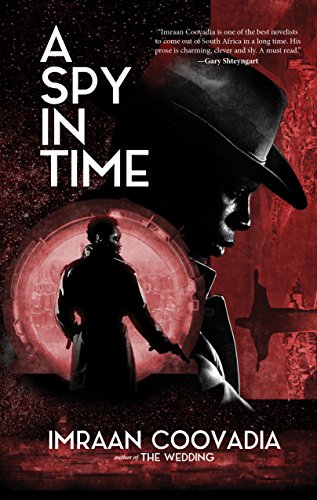 In the year 2472, much of earth is wiped out by a near-apocalyptic event—the “supernova.” Deep underground, in Johannesburg’s abandoned mines, a few survivors remain, who eventually restore civilization. The supernova is predicted—and survival made possible—by a man named S Natanson, who also discovers time travel. Thus is born “the Agency”—a secretive organization of the Time Police, whose job is to “protect the narrow route that led humanity as a species through the blinding dark of the supernova; to prevent the splitting of the unity of time into endless contradictory strands.”

Enver Eleven, a twenty-five-year-old member of the Agency, is deputed to Marrakesh, 1955, to track the suspicious movements of one Keswyn Muller, who is apparently trying to throw a spanner into the works of time. Very soon, however, Enver discovers that he is getting more than he bargained for: his senior agent on the trip, Shanumi Six, disappears; Enver finds himself buried alive for many thousands of years, before being transported back to his time, and then deputed to Rio de Janeiro, 1967—still on Muller’s trail. In the course of his travels, it becomes clear that the Agency itself has been compromised, and powerful forces are at work to change the past—and thereby, the future. And in some inexplicable way, machines seem to be involved. As Enver heads back for a re-enactment of the Day of the Dead—the day the supernova struck—he will come face to face with the eternal time paradox of whether he can change something that has already happened—and perhaps more fundamentally, whether he wants to.

So far, this probably sounds like a familiar riff on the classic SF time travel theme: it has a time police and (numerous) time paradoxes, staple features of the sub-genre. Debates over whether—and how much—one can “intervene” in the past (with an extreme non-interventionist group called “The Restrictionists,” to boot!) to assure the future will also be familiar to readers of an older science fiction canon (Asimov’s The End of Eternity is one example of many). But A Spy in Time is not simply an innovative 2018 effort to cash in on what the Science Fiction Encyclopedia drily calls a “wasting asset” (although it does so with considerable style and aplomb). It’s something more than that.

In a June 2018 interview with the Johannesburg Review of Books, Coovadia remarked that the inspiration for A Spy in Time was “fallism”: a student movement that began in 2015 at the University of Cape Town with the smearing of feces upon the statue of notorious racist, imperialist, and mass murderer Cecil Rhodes, but then expanded into a more structural critique of—and protests against—the persistence of a racialised higher education system. In the same interview, Coovadia went on to pointedly note that “it is clearly more harrowing to be time travelling when black.” But what does racism have to do with time travel, you may wonder? A Spy in Time shows us how: after the supernova, a majority of the survivors are black, and “whiteness”—or “albinism,” in the terms of the book—is a deviant and despised condition. Growing up in a world where his skin colour is the “normal” Enver, of course, is unprepared for a time and place (such as Marrakesh of 1955) where that same skin colour can single him out for persecution and violence. Part of the Agency’s training programs, therefore, focus on preparing black people to travel to times where blackness puts you at immediate and constant risk; and that looming threat of proximate violence dogs Enver’s steps throughout Marrakesh 1955 and (although to a lesser extent) Rio 1967, affecting not just his mind, but also his ability to carry out his mission.

So race, it turns out, does matter in time travel; it is just one of those things that is difficult to see until it is shown, but then, can never be unseen. In the finest tradition of science fiction, Coovadia uses the capacity of the genre to illuminate one of our most unspoken assumptions—simply by tweaking one or two of the conditions that structure the world as we have come to experience it, and what we think of as “normal.”

This should not be taken to suggest, of course, that A Spy in Time is a political polemic masquerading as a science fiction novel. Issues of race are woven into the fabric of the novel, and are present from the beginning to the end, but they do not exist independent of that fabric. A remarkable feature of A Spy in Time is how it succeeds in making issues around the “wasting asset” of time paradoxes still sound fresh and new. It does so through a renewed focus upon the psychology of time travel. “Our hearts were not designed to cope with chronological disorder,” Enver muses at one point, “We were built to advance step by step, one day after the next, climbing from the past through the present into the future. Any greater degree of freedom meant exposing the soul to the pressure of the infinite which it could not withstand” (p. 152). And at another point, more simply, “everyone wanted to know the future but it made us miserable when we did” (p. 150). A Spy in Time combines the thrill of time-chases across eras with the humanity of the enterprise (a terror of “multiverses” is a consistent theme across the novel).

A second twist on the classic theme, perhaps more predictably, brings AI into the picture. In his JRB interview, Coovadia also traces his own trajectory from a techno-utopian to having become somewhat more … realist, a trajectory that would be familiar to many. The conflict is set up early enough in the novel, as Enver wryly notes that “my father loved the machines for their forbearance. Conversely, he hated the secret government, its pretensions to govern human history and the human heart, considering it treason” (p. 98). Events will reveal, of course, that this narrative is not so simple as it appears, and when the machine’s calculated vision of the future (governed by something that sounds quite similar to Asimov’s Three Laws of Robotics) clashes with the Agency’s guardianship of Time, A Spy in Time does not leave us with the comfort of an obvious conclusion.

There is a lot, then, that takes place in A Spy in Time, and that is perhaps its weakness: it is of course possible to address a whole host of complex questions while continuing to tell a rollicking, fast-paced story, all within the space of 225 pages, but it doesn’t often happen. And on putting down A Spy in Time, one is left with a vague feeling of discontentment—as though there are far too many tantalizing threads that have been left untied, far too many enticing passageways that one was taken down, and then left to wander without a light. Perhaps an ideal base for a sequel—or perhaps not, because it is, after all, “more harrowing to be time travelling when black.” A Spy in Time is a rich and rewarding read as a stand-alone novel.