Reviews
Size / / /
Albina and the Dog-Men by Alejandro Jodorowsky, translated by Alfred MacAdam
By: Chris Kammerud 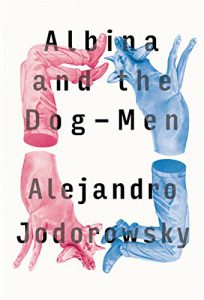 "The White Lady, who has fled from a temple—I don’t know if she transmits a blessing or a curse. She’s something less or something more than human."

Here we have another entry in that continuing series of tales preoccupied with the disastrous bite of a woman and the quests one must undertake to put things right again. This particular woman, the titular Albina, appears near the beginning of our story, falling from the sky during a thunderstorm. Jodorowsky describes her as possessing long hair, enormous breasts, intriguing eyes, skin "white as flour, salt, marble, a shroud, or milk", and legs that, one presumes, don’t quit. She is chased by "three asiatic monks" with "thirty long fingernails as sharp as knives." Another woman, known as Crabby and having recently discovered her loneliness as a "wound awaiting the gaze of another in order to heal," rescues this fallen angel, scaring away the scary "chinamen" by smashing an iron bar on the street and proclaiming "May the devil swallow them!" A request that, happily, the earth obeys, cracking open and dispatching those malevolent stereotypes, long fingernails and all, into the abyss.

Albina and Crabby, safe for the moment, become fast friends. They set up a strip club, in which Albina joyfully mounts a wooden barrel and strips down to her G-string, "exhibiting her enormous breasts and shaking her hips to the rhythm." The men of the town gather to watch.

. . . crude miners with inexpressive eyes and stony faces, filled the place and stood stock still, hypnotized by the white goddess. Crabby’s mistela was strong, and after a dozen glasses their knees gave out. They fell prostrate, sometimes foaming at the mouth, propped up by the legs of those who could still stand. Late at night, Crabby stopped distributing drinks and skewers, turned off the gramophone, and covered Albina with a black mantle as if she were a plaster saint. The miners left the establishment walking backwards, bowing, and making the sign of the cross.

What begins, though, as a couple of gals cashing in on the worship of Albina's pleasing and pleased demeanor, goes horribly wrong at the moment this fantasy is threatened with reality. A city inspector, one Drumfoot, threatens to shut them down unless Albina deigns to please him. As Drumfoot says, "My law may be sticky, but it is the law!" Thankfully, the inspector falls over drunk and snoring before he can hold Albina to his threat. Unfortunately, Albina, perhaps enraged, "bit his shoulder with a strange squeal" and, in terror, Crabby and Albina go on the run, in search—as Crabby says, for ". . . a place that isn't infected by the smell of rot, a place where the miraculous can be born. A clean town with a soul that corresponds to you [Albina]." Along the way, we learn the cost of Albina's teeth. It turns out, you see, that when Albina isn't stripping for the delight of men, but, instead, sinking her teeth into the flesh of men, she adopts the form of a ravenous beast whose very attentions transforms her lovers into dogs.

Alejandro Jodorowsky might be best known among readers of Strange Horizons from the film, Jodorowsky's Dune, which documents his long-running, deeply imagined, but ultimately failed attempts to adapt Herbert's novel. About halfway through Albina, it occurred to me, perhaps, why Jodorowsky might have been interested in Dune. How could one resist the prospect of magic dust and sexy worm riding? Jodorowsky, of course, did succeed in making several films. In particular, El Tupo and The Holy Mountain, often described as surreal and psychedelic, have earned cult status over the years. Considering this, perhaps it's not surprising that while reading Albina I thought of two other men often associated with trippy and debatable narratives of exaggerated proportion. Russ Meyer and R. Crumb.

Meyer, famous for such works as Mud Honey and Faster Pussycat, Kill, Kill, often populated his narratives with women that served both as narrative engines and sexual objects. It has been said about Crumb, an artist who has come under fire often for misogyny and racism in his caricaturistic style, that it's hard to "tell if [he] was an old man drawing young or a young man drawing old." And that's the way of it here, with Jodorowsky. As with Meyer, we have women who seem, while possessed of a predilection for stripping, still fantastically innocent, and it is, for the most part, only through the fault of dirty men that they find themselves in no end of trouble. And as with Crumb, it's hard to say if Jodorowsky is channeling some significance through an adolescent's tumescent fantasies, or if he's channeling some adolescent's tumescent fantasy in the uncertain hope that it will, at some point, signify something more. Perhaps he's just having fun.

There is something gloriously ridiculous, after all, in the unfolding and sexually transparent quest upon which Albina and Crabby embark. They bike deep into the desert in search of the milky sap of purity (derived from the breath of a blossom of a cactus buried deep in a cave in the mountains) which might cure Albina, and the accompanying dog-men, of their animal natures. And there are moments of surreal and searing beauty scattered throughout this quest. A rainbow fall of parrots. An abandoned ship in the desert, crewed by various statues of Saint Peter. A strange old woman and the sight of her familiar, an armadillo, "climb[ing] up the old woman’s body as if it were a dead tree and arrang[ing] itself on her bald head like a hat."

And yet, for all this beauty, the novel trades most often, for better or worse, in grotesque cliché. Men as dogs, burdened by their enraged penises. Women as sexual vessels that flicker back and forth between swans of black and white, always in need of the gaze of others to see themselves as truly beautiful (true beauty here, of course, being that of "firm breasts, small nipples pointing toward heaven, narrow waist, hips with soft curves, well-formed and well-muscled thighs"). Drumfoot, mastering his desire to "possess" Albina, transforms from murderer to angel. Crabby, through both her shared (occasionally amorous) gazes with Albina and a singular bit of sex with a man, learns to shed the "silhouette of the crustacean she felt herself to be." Albina, we learn as we go, escaped from a temple of worshippers. She is the ghost of a goddess, desperate to free herself from idolatry but cursed for her effort. As one wise old bird predicts, Albina "in her useless attempt to gild her soul, attracted by flesh, [will] be less and less a goddess and more and more a dog." At one point, Albina and Crabby must outwit a "tricky," "white-haired and flabby Indian" in order to collect the prophesied nectar, the collection of which, triggers a hurricane that drenches the surrounding desert, transforming its previously barren landscape into one more moist, and presumably, fertile. Occasionally a signifier and its signified are, more or less, the same thing.

In the opening paragraph of Jodorowsky's novel, there is this description of Crabby:

Like all Chileans, Crabby spoke in a singsong way, her voice vibrating in her nose. She laughed at everything, even celebrity deaths, and made cruel jokes. She drank red wine until she collapsed in snores, only to wake up barefoot because someone had stolen her shoes. She ate empanadas and sea urchin tongues in green sauce seasoned with fresh, extra-hot chili. Whenever the cops beat a "political agitator" to death, she turned a blind eye, pretending not to notice. Actually she wasn’t Chilean but Lithuanian.

Here’s a character built of paradoxes and empanadas—a woman alive with the flavors of chili and the humor of death. Soon enough, though, at the passing of her father and the simultaneous arrival of her menstruation, the presentation of Crabby changes. She rides her father's coffin, staining it red, and marks the first in a series of unfortunate events that get tangled up in the oppressive iconography of sexual shame and purity. The novel reverses the wise old bird’s warning to Albina of becoming less of a goddess and more of a dog, shedding as it goes more and more of its reality for the garb of pure idolatry. This is not altogether a bad place to situate your writerly struggles, of course—William Faulkner made much hay of notions of purity and shame. In fact, he tore them to pieces, punching through the illusion of purity with the reality of his characters, however grotesque their subject. Here, though, they crumble. Jodorowsky imagines humanity such that everyone becomes either a wretched, lusty, malformed, ugly cook or a pure white angel. The thing is, though, that a great story, whether subtle or bombastic, arrays its signifiers to point to some deeper reality. Nuance, while admirable, is no more valuable than a precise deployment of exaggeration. Once your signifiers begin pointing back at themselves, you’re in trouble. Jodorowsky fails to ignite Albina with the life promised in that opening description of Crabby, and this failure, more than anything else, left me disappointed.

In an article for The New Yorker, "When Women Signify Too Much," Jia Tolentino quotes feminist writer Sady Doyle as saying, "Women, it turns out, are not symbols of anything, other than themselves." She goes on to conclude, herself, "An essential burden of womanhood remains that of being required, by everyone, to signify too much." In Albina, Jodorowsky both wrestles and indulges with this reality. On the one hand, presenting us a narrative of female friendship driven by one half of that pair, the titular Albina, having escaped from the diminishing worship of packs of men. And, on the other hand, depicting that same woman escaping not into the reality of herself but into the fantasies of others. So it goes.

Like Loading...
© Copyright 2017 By: Chris Kammerud
About Chris Kammerud
Chris Kammerud’s fiction and nonfiction has appeared in Bourbon Penn, Phantom Drift, Interfictions, and multiple times in Strange Horizons. He produces and co-hosts the short story discussion podcast Storyological. He is a graduate of the Clarion Science Fiction and Fantasy Writers’ Workshop, and he holds an MFA from the University of Mississippi, where he studied as a Grisham Fellow. He lives in London with his partner. You can find him online at @cuvols or www.chriskammerud.com.
No comments yet. Be the first!