Reviews
Size / / /
All Our Wrong Todays by Elan Mastai
By: Patrick A. Smith 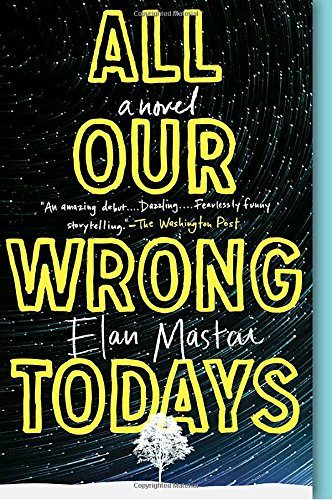 In his debut novel, Elan Mastai, a screenwriter by trade and a roboticist by training, reworks some tried-and-true SFF tropes in an engaging, kaleidoscopic time-travel adventure set in Toronto—all while foregrounding the relationship between his protagonist and narrator, Tom Barren, and Penelope Weschler, fellow chrononaut and Tom’s romantic obsession.

Mastai’s sense of wonder drives the book: his polymathic, often playful and humorous views on the possibilities of time travel and alternate worlds, for one; but also the seemingly accidental (a word that appears often here) crux of multiple realities. Indeed, Tom and Penelope’s 2016 is nothing short of utopia: a stable climate, improbably tall buildings and advanced materials, fine dining created from a nutrient goo matched to individual taste buds, flying cars and moving sidewalks, are all a reality rather than a punchline. It is a McGuffin known as the Goettreider Engine that provides limitless energy to Tom’s world and makes possible the invention of a practical time-travel machine by Tom’s father, Victor.

Tom finds himself at the center of history when a calamity compels him to hijack the machine. Mastai’s luxurious descriptions of a post-scarcity world, an homage to the quintessential Golden Age future, contrast with the far less controlled (yet—interestingly, appropriately—more vital) present—our own—in which Tom consequently finds himself. Even more engaging than the author’s world-building and the rocky relationship between Tom—who in the novel’s dystopian present becomes a famous, if unlikeable, architect named John—and Penelope—who owns Print Is Dead, an independent bookstore in Toronto and is known here as Penny—is the novel’s focus on the storytelling process: it is narrative intrusions, asides, and summaries of events from previous chapters that differentiate Goettreider’s world from ours.

The book is memoir, not fiction, Tom insists—and just by making that distinction, Mastai tips his hand, suggesting the incapacity of any text to be purely one or the other—before admitting the difficulty of articulating his experience. In an ironic observation limning the uncomfortable limbo between memoir and fiction, Tom calls into question the value of “bespoke novels” that replace our own imperfect, beautiful, messy stories which are in reality shaped by the vagaries of neurological and biological yearnings:

Even this, composing a narrative one word at a time and pretending that I don’t know how it ends—it’s weird for me. Unless you’re a bespoke novel enthusiast like my mother was, someone who enjoys being led by the hand like a child through a hedge maze, where I come from most narrative entertainment is at least passively interactive, using the same neural tracking technology that lets your virtual environment simulator ease you out of your dreams in the morning. Every story is uniquely personalized, your desires, fears, anxieties, quirks, and kinks shuffled into the prestructured plot, like a skeleton around which your own weird little brain grows a one-of-a-kind body. (p. 102)

Later, Tom remarks, “despite the widespread political chaos, social dysfunction, technological incompetence, and putrid toxicity of this world, one thing is way better here—the books” (p. 150). Tom’s present forked off from our own palimpsest of his world on July 11, 1965, when Goettreider powered up his engine in front of sixteen onlookers in a basement at the San Francisco State Science and Technology Center. Each would have books written about them and their role in the most significant achievement in history. Students would be taught to recognize the sixteen by the looks on their faces: skeptical, awed, distracted, amused, and so forth. All would be dead within three months because of the powerful radiation emitted by the device, the same radiation that would make time travel possible half a century in the future. “If there’s a religion where I come from, it’s self-sacrifice at the altar of discovery,” Tom muses. “Lionel Goettreider gave his life so the world could blossom into a paradise beyond his imagining. The fact that his sacrifice was accident is considered poetic” (p. 97).

Goettreider’s favorite novel is Kurt Vonnegut’s Cat’s Cradle (right, the one where the world ends in ice; Mastai has spoken of Vonnegut’s influence on his own work). It is in Tom’s utopia revered as an urtext and Vonnegut one of the preeminent philosophers of the twentieth century. The Vonnegut we read, of course, isn’t the same one Tom knows. Mastai’s nod to the importance of literature—and the notion that, in a seemingly perfect world, Kurt Vonnegut would be revered as a rainmaker—is one of many sly insights salting the book, reminding us of the complexity and absurdity of a world of infinite variety and possibility:

Vonnegut’s writing is different where I come from. Here [in the dystopian present], despite his wit and insight, you get the impression he felt a novelist could have no real effect on the world. He was compelled to write, but with little faith that writing might change anything. . . . Lionel Goettreider read Cat’s Cradle and had a crucial realization, what he called the “Accident”—when you invent a new technology, you also invent the accident of that technology. . . . I’m not a genius like Lionel Goettreider or Kurt Vonnegut or my father. But I have a theory too: The Accident doesn’t just apply to technology, it also applies to people. Every person you meet introduces the accident of that person to you. What can go right and what can go wrong. There is not intimacy without consequence. (pp. 13-15)

All of Tom’s assertions are borne out, of course: the inevitable technological gap that arises from the failure of Goettreider’s Engine when Tom goes back in time; the much different outcomes for each of the aborted experiment’s sixteen witnesses, some of whom are still alive in Tom’s post-time-travel present; the barely recognizable characters—John and Penny—who stand in for Tom and Penelope in their new reality.

Mastai handles it all with humor and more than a dose of winking cynicism, punctuated by the pining of a hopeless romantic for a different sort of life. “We told ourselves the world is here for us to control, so the better our technology, the better our control, the better our world will be,” Tom/John philosophizes on his way to meet our incarnation of Goettreider (here, Lionel Grey) in Hong Kong. “The belief that the world is here for humans to control is the philosophical bedrock of our civilization, but it’s a mistaken belief. Optimism is the pyre on which we’ve been setting ourselves aflame” (p. 263).

Tom bemoans the profound differences between his timeline and ours, but one thing doesn’t change: the human desire for connection—to people, to experience and memory, to time, to place. Mastai’s iterative narrative, voiced through intrusions and summaries, tellings and retellings, and an entire chapter consisting of Tom’s profane reaction to his first time-travel experience, echoes the ache of displacement from having lived in two different nows, always circling back from the past to make sense of an increasingly unfamiliar present. The author renders comprehensible both the impossibly large and the unimaginably small: atoms and worlds and time and people collide, an unending series of accidents, reminding us of the complexity and beauty and randomness of life, and—most important—giving us stories.

Like Loading...
© Copyright 2018 By: Patrick A. Smith
About Patrick A. Smith
Patrick A. Smith is an associate editor at Bookmarks Magazine and the author of "The true bones of my life": Essays on the Fiction of Jim Harrison, Tim O'Brien: A Critical Companion, and the edited collections Conversations with Tim O'Brien and Conversations with William Gibson, as well as interviews, articles, reviews, and fiction in Abyss & Apex, SF Site, and numerous other magazines and journals. He lives in Havana, Florida.
No comments yet. Be the first!