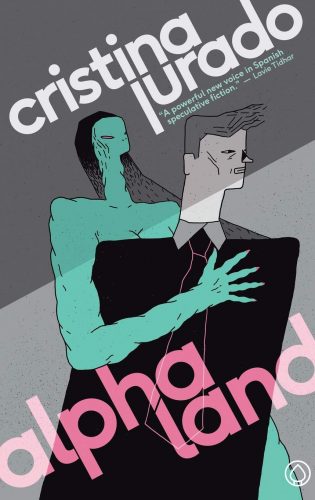 A collection of short stories is a distinct authorial challenge, because even if all of its components were written in the same linguistic context as that of its intended audience (which is not the case here), you still face the problems of any short story collection. Which pieces from an author’s biography will be most representative? Which ones will work best together?

Individually, many of the pieces in Cristina Jurado’s Alphaland have histories of success. “Second Death of the Father,” for instance, was first anthologized in its original Spanish, and won Best Story in the 2017 Premios Ignotus, the annual literary awards of the Asociación Espanñola de Fantasia, Ciencia Ficción y Terror (AEFCFT). Others hail from varied backgrounds: a EuroCon anthology, a David Bowie homage anthology, a steampunk anthology. Together, these works attest to a wide-ranging literary presence—all of which accords well with the author’s biography, as a writer (Del Naranja al [2012]; CloroFilia [2017]), editor (Alucinadas [2014]), and Spanish translator (Apex Magazine, SuperSonic Magazine) currently based in Dubai.

The critical question, though, is whether this set of stories—some written by Jurado directly in English, others translated by James Womack—will have the same impact for an audience reading her work from seasoned positions in the English language horror-fantasy tradition. And the answer—though unfortunately a “no”—is worth more expansive study.

Put simply: many of the stories in Alphaland play on body horror in ways that feel out of step with the cadence and history of similar conversations in English-speaking fantasy. “Vanth,” for instance, is the story of a child who is shot in the head by his father, and who later in life employs a sex worker who turns out to be an otherworldly figure associated (by story title and a character’s speech in ancient tongues) with an Etruscan deity connected to the imagery of the huntress, slaughter, and journeys to the underworld. This, the collection’s opening story, vaguely invokes ideas found in James Tiptree Jr.’s “Her Smoke Rose Up Forever” (1974), C. L. Moore’s “Shambleau” (1933), the movie Under the Skin (2014), and Brooke Bolander’s “Our Talons Can Crush Galaxies” (2016). But Jurado’s exploration of feminized predation and the cyclicality of suffering does not offer any greater revelation than the imputation, in the closing beat, that a feminized person might have done so much damage to a masculinized person.

Along the way, too, the story relies on lines that—while not out of place in the Spanish horror tradition, which frequently leans on maternal and gestational themes [1]—are exceptionally heavy-handed when seen from the perspective of the Anglophone tradition. For instance:

His swollen glans is the head of a semi-developed foetus, looking to make its way back into the womb, the nest where it was formed and where it feels at home, the familiar uterine darkness welcoming him once again. (p. 19)

(in another review, I called attention to a male author’s poor use of sexual metaphor, so for fairness’s sake it bears noting the same weakness here: a penis seeking to enter uterine darkness, as opposed to vaginal darkness, would be horrifically painful and is emphatically ill-advised.)

But also, the story’s overall structure places it firmly out of step with the cadence of horror narratives more typical, say, to a North American English-speaking reader, which could easily limit the reach of this English-language collection out of Nevsky Prospects S.L. First, we’re given a glimpse of a boy’s difficult, realist childhood. Next, we cut to the grown man’s use of sex workers for relief on professional trips. Lastly, after a prolonged description of the initial sexual encounter, we break into horror-fantasy when the woman’s true nature is revealed. The man’s body then distends over the next few pages, while a disembodied voice rambles about the predator’s life in different eras and poses questions about its fundamental nature.

Thus, at a hasty glance from this standpoint, the story might seem like a haphazard fight against the dreaded blank page—its author first inspired to pour out a bit of a traditional coming-of-age tale, then free-associating to a seemingly unrelated episode set in the character’s adult life. Throw in an unfocussed array of visceral details to play up the body horror; slip in one reference to the story’s opening scene (but only in a descriptive paragraph where it comes off as forced and superfluous); jump to a bit of dialogue between the crime scene investigators; and… Fin!

Now, I read continental European fiction perhaps with greater frequency than the average horror-story reader in North America. As such, I don’t always trust first instincts like the above. In anthologies like the Best European Fiction series, which showcases one story or novel excerpt from every European country in English alphabetical sequence, you’ll often find horror stories that do not fit neatly under the scope of Western-commercial genre divisions, and mainstream stories that do not seek out narrative cohesion. In other words, this seemingly unrelated leaping around in a character’s life is one of many other ways that North American and European fiction can differ in narrative means and ends.

I was not surprised, then, to see such elements emerge throughout Jurado’s collection. In “Alice,” a story about someone who at first thinks that their prior self-opted for a procedure that wiped all their preceding memory and identity markers, the ending likewise lacks traditional North American punch. And in “Inchworm,” a story inspired by a Bowie quote and music video, the philosophical reasoning for the piece is explicitly outlined in an author’s note at the start. The collection’s titular story, too, is a wisp of a narrative exercise: more philosophical statement about the pseudo-erotic shadows that plague us in our youth, occluding our ability to form more meaningful human connections until they switch off almost out of the blue, than a story that draws toward more familiar forms of narrative catharsis.

And yet, though all these contextual differences sprang to mind while reading Jurado’s work, I would be remiss if I simply treated all her jarring choices as “cultural”—whether across Spanish/English or European/North-American fantasy-discourse divides. In “Alphaland,” for instance, the ending’s central revelation seems to be the utterance of the story’s—and the whole collection’s—title: a weak move in most literary contexts. It proves especially so here, too, because the word “Alphaland” is not employed in a way that greatly enhances any preceding concepts: the idea of remembering one’s dreams; the furor of sexualized fantasy in pubescence and young adulthood; or the feeling of loss when that dreamstate ceases to be an all-consuming obsession. The writing in these four pages gives the impression of a narrator who believes themself to be unique in this experience, and thus in need of a specialized term for the mundane … but indeed, the entire enterprise of “secondary-world” fantasy is contingent on a shared understanding that our “first” world is intrinsically without overt shows of magic and wonder. As with the endings of “Vance” and “Alice,” this one underwhelms.

Likewise, in “Inchworm,” it almost doesn’t matter if Jurado is biographically accurate or not when she links Major Tom iconography with ideas of Bowie both as an older man and as “a child being raped by his father’s best friend in the kitchen at Bromley” (p. 45). I could find no clear reference to such an incident in Bowie's biography, but even if true (and I have to trust that such a detail would have been fact-checked for a whole anthology dedicated to Bowie), its placement in the story makes its function plainly to provide a shock-value closer; a narrative use for rape that has long since passed beyond the pale in most contemporary literary discourses.

There is, too, the matter of translation to consider, and here the stories translated by Womack appear to be more seamless in their word choice, while some of the stories Jurado wrote directly in English have linguistic snarls tethered to the difference between direct and oblique translation. For instance, when a robot declares in “Alice,” “Your earlier asseveration about being rich is a very logical explanation” (p. 56), the aseveración described is not nearly as common as the English assertion, and will more often read to English speakers as a misspelling.

Such linguistic stiffness, though, is but a minor quibble. For me, the more valuable meditation that arises from Jurado’s Alphaland lies with the fact that translation is not simply a matter of swapping out words correctly. Success in this regard also requires an effective translation of how one is speaking from another set of narrative traditions, with this effort ideally manifesting in a self-evident harmony—however different that harmony might be—between form and literary function.

Doubtless, Jurado’s work as a translator and editor in supporting the growth of other voices—feminized, Spanish-speaking, international in scope—speaks for itself as vital and impactful. Likewise, her 2017 win of a Premio Ignotus reveals a writer who plainly earned an enthusiastic audience. Nonetheless, a reader coming fresh to her work from an English-speaking context is more likely to find in Alphaland a collection of stories that—in their pacing, their imagery, and their thematic priorities—will more often feel like shades than the horrors they propose.