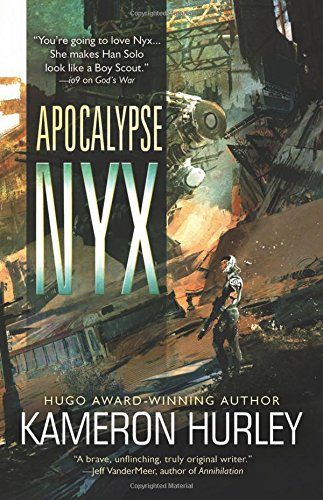 Apocalypse Nyx, like its title character, is swaggering and brash, bristling with guns and spitting quips. In this collection, Kameron Hurley returns to her debut trilogy, the Bel Dame Apocrypha, with five new novellas featuring Nyxnissa so Dasheem, commonly called Nyx. Nyx is a mercenary in Nasheen, which is at war with neighboring Chenja. This isn't Earth – there are two suns in the sky, there are magicians and shapeshifters, and technology is based on the use of insects. Nyx isn't a magician or a shapeshifter, but she does have a preternatural aptitude for survival. She served in the war, became a government assassin, and then went to prison. Now she is just trying to pay rent as a bounty hunter.

Hurley is the author of six novels, with two more out soon, but Nyx may be the character most emblematic of her work so far—a violent, hard-drinking woman with a knack for scratching her way to bloody survival. Blood, survival, and whiskey are in abundance here. Each novella centers around a job for Nyx and her crew, from tracking down rogue magicians to collecting bugs of data from an acid pool. Usually the job goes wrong as a result of a cascading series of bad choices and bad luck. In “Crossroads at Jannah,” which is about the aforementioned data bugs and acid pool, one of her crew members freaks out on a stimulant of some kind, ruining their easy plan and requiring increasingly tenuous actions. In “Soulbound,” one of her crew is accidentally shot at close range, and then things get worse. And so on. As Nyx reflects in “Soulbound,”

Rounding up a gang of rogue magicians with just one mediocre magician, a moralist shapeshifter, felon sniper, and snot-nosed kid of a com tech was pretty much doomed to fail. But weren't they always doomed to fail? It's what made it so exhilarating when they survived the day. Or the hour. The minute, really. This was why she drank so much.

Nyx doesn't have many compliments for her team here. This isn't a crack team, taking on bigger and bigger challenges. Sure, they aren't wholly incompetent, but in these novellas they seem to be continually doomed to fail, teetering on a precipice of destruction, drawn in by their own hubris and curiosity and Nyx's bloody-minded commitment to finishing a job. (And ending with a drink, to follow up on all the drinks she took in the middle of the job, too.)

Did I mention there is a lot of blood? Torn up bodies litter the pages. Those bodies, and their destruction, are often described with a clinical distance (or, perhaps more accurately, a mercenary distance), which mirrors Nyx's own relationship to death. Though other characters have less numbed responses to catastrophic injuries and destroyed bodies, the narrative hews closer to Nyx when it comes to bodies and blood. The collection opens, for example, with Nyx examining “a mangled wreck of shattered limbs and shredded torso.” Her reaction? “Nyx toed at the burst flesh of his admittedly once-fine form, now split and oozing a sour blend of offal that brought to mind the pungent stink of rotten bodies at the front” (“The Body Project”). She isn't horrified. She isn't shocked. At most, she is professionally curious about what happened to the body to cause the shattering and shredding. Most of the bodies in Apocalypse Nyx are similarly shattered and shredded. No one is ever simply dead in these stories. The extent of the bodily destruction has an echo of body horror to it, which is a tendency that runs like a thread through most of Kameron Hurley's work, no matter the genre. Her writing revels in a fascination with how our bodies are little more than fragile containers of blood and a parallel fascination with human inventions to destroy those fragile containers. In Apocalypse Nyx, those human inventions are scatterguns and acid rifles, poisoned needles and swords, bombs and mines, and chemical weapons that smell of lavender and saffron.

Hurley is also keenly aware of how the presence of unexpected death can lead to bodily recklessness. Her characters use and abuse their bodies. Organs are sold; contraband is carried internally, wrapped around a heart or tucked up against the spine; magnetic keys are installed in brains. Even clothing choices are affected, as seen when a character's choice to protect themselves from the sun marks them as a visitor to the warfront:

This close to the contested border with Chenja, everyone figured a bullet or a burst would get them long before cancer from the blazing suns and toxic air. It was too hot, and life too short, to worry about it. (“The Heart is Eaten Last”)

Nyx certainly doesn't worry much about the two suns blazing overhead. Nor does she worry overmuch about all those torn up bodies, or the people around her who could be turned into torn up bodies.

If Nyx sounds like a monster, well, she is. She is a killer, whose best skill is surviving by any means necessary, and she does so in part by denying the emotional connections around her. Hurley described the dynamic best in her essay collection, The Geek Feminist Revolution: “[By creating Nyx,] I had, I realized, created a monster. I'd created an '80s action hero.” Those '80s action heroes that Hurley talks about were primarily male, their monstrousness an extrapolation, conscious or unconscious, of toxic masculinity. I was never as interested in '80s action heroes as Hurely seems to have been, but there is nevertheless an intrigue in the gender-swapping, even after three Nyx novels. Perhaps it's because with Nyx the toxicity is front and center. Her inner and outer destruction becomes the central emotional tension of Apocalypse Nyx, as the people around her hold out hands that she slaps down again and again. She disappoints her crew, and herself:

Saving people like Rhys and Jahar was never part of the plan. It's why she no longer believed in the war. It's why she left the service. She knew just how highly her government valued the bodies it flung at the border. She feared becoming as callous as they were. But she already had, hadn't she? A long time ago. (“The Body Project”)

This tension works because Nyx is not completely callous. The above quote about her callousness is a statement of disappointment in herself, which, arguably, is evidence that she isn't truly callous. Her actions bear this up. She does end up saving Rhys (the magician on her crew) and other members of her crew throughout these novellas, even as she comes close to killing several of them on other occasions. These moments of connection and disconnection form a loose emotional arc through the collection, with the final novella showing Nyx and the reader both that there are monsters worse than her.

Ultimately, though, each novella is a standalone story, tightly focused on a single job for the crew. They were written separately—four of the five for Hurley's Patreon—and gathered after the fact into this collection. As a result, each story explains the characters anew, as if the reader didn't know them from the previous novella(s). Hurley doesn't slow down to provide these explanations, slipping them easily into the forward momentum of each story, but the repetition still gives the collection a disjointed feel. These explanations could be helpful for new readers, who aren't familiar with Nyx and the others from the novels, though the main audience for Apocalypse Nyx is clearly existing fans. Not only were most of the novellas originally published via Patreon, with its built-in fan audience, but Hurley also named the impetus for these stories being fan requests for more Nyx in an interview with Barnes and Noble. In fact, at times it feels like the focus on providing more Nyx pushes aside other story elements. Bugs, religion, Nasheen, the other members of her crew—all are subsumed into the relentless drive of Nyx's rises and falls. I noticed this in particular with the novellas’ approach to religion, which is omnipresent both in terms of Nasheen's Islam-like religion and the references to the customs and beliefs of other countries. Despite these references, and contributions to the plot of “Soulbound,” the various religions feel only intermittently lived-in. Fitting, perhaps, for stories about a bounty hunter whose moral code has tightened to “get the job done,” but I still occasionally longed for a wider lens.

My main takeaway: readers who didn't care for Nyx in the novels won't find anything to change their mind here, but for readers who enjoyed Nyx in the Bel Dame Apocrypha, or who are intrigued by this rough and tumble mercenary, Apocalypse Nyx can be an exhilarating jaunt. There is even comfort in the collection, despite the blood and guts and broken characters. The comfort is in the story beats and repetition. The cycle of destruction and survival. The familiar. Like a mystery series or sitcom, the anticipated bits are as exciting as the surprises. Will Nyx use the razors hidden in her sandals in this story, or the poisoned needles hidden in her hair? What giant gun will Anneke pick up? What will Nyx and Rhys argue about this time? Who will get shot? Who will make a mess of things this time?

“How much trouble we get into 'cause we're bored, boss?”

Like Loading...
© Copyright 2018 By: Sessily Watt
About Sessily Watt
Sessily Watt endeavors to embrace uncertainty and the limits of her own knowledge. She often fails, and tries to embrace that failure as well. Her writing has appeared in NonBinary Review and Bookslut. You can find her at sessilywatt.weebly.com and on Twitter as @SessilyWatt.
No comments yet. Be the first!