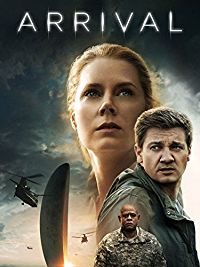 Ted Chiang’s “Story of Your Life” came out in 1998, and won the 2000 Nebula for Best Novella and the 1999 Sturgeon Award. It is a very unlikely story for adaptation (which honestly goes without saying but there are still people who have never read it): its narrative seems to jump back and forth in time as the protagonist tells two interconnected stories, one of her daughter’s life, and the other of her time spent trying to decipher the language of aliens (as in, outer space aliens). As she learns and understands more of the aliens’ language, she understands and internalizes their concept of time, which is not linear. (Ted drew inspiration from the concept of the Sapir-Whorf hypothesis, which put forward the theory that a language affects the speaker's cognition or worldview.)

The aliens themselves are called “heptapods,” because they walk on seven legs, and it's not really clear what their faces are supposed to look like. Let us remind ourselves what they look like in text:

Whatever their underlying structure, the heptapod’s limbs conspired to move it in a disconcertingly fluid manner. Its “torso” rode atop the rippling limbs as smoothly as a hovercraft.

Seven lidless eyes ringed the top of the heptapod's body. It walked back to the doorway from which it entered, made a brief sputtering sound, and returned to the center of the room followed by another heptapod; at no point did it ever turn around. Eerie, but logical; with eyes on all sides, any direction might as well be “forward.”

When I was a teaching assistant for an introduction to science fiction course, the students were asked to draw what they thought the heptapods might look like. This just seemed like one of the natural attempts to try to apprehend, in text and in visuals, something utterly alien. How would a movie depict them, and their language? How would the narrative unfold? What kind of movie could one make of a story where a person decides to accept that they will live a life full of joy and pain, beforehand?

Script writer Eric Heisserer and director Denis Villeneuve have accomplished a movie adaptation that maintains the emotional core of its source text, telling a story that resembles the source while using its medium to do something the text cannot, all the while hitting several emotional notes at once (though not necessarily the same ones the source does, obviously). This is a movie that does not waste a single moment, much like how a Ted Chiang short story does not waste a single sentence.

First, the major, noticeable changes. The movie has twelve ships landing across the globe, rather than the hundred and twelve “looking glasses,” in places like China, Pakistan, Russia, and America. When Louise Banks arrives on the scene, the military have set up several screens with which they are communicating with similar outfits in the other countries investigating the spaceships. Newscaster shots of the chaos erupting across the whole world, plus the growing xenophobia and its consequences, very clearly mark the time of this film. This is a post-9/11 world with political tensions running high, in which militaries are afraid to share intelligence with each other in case the others use it against them (or in case the aliens use it against humans). This raises the stakes of figuring out the language of the aliens, which is necessary for a feature film, I suppose. But it doesn’t feel like a change that’s made for fun: it manages to be political, manages to offer both ambivalence and optimism in equal measure.

The other major change: the daughter. The movie still tells a story in linear time as it has to, but it folds in Louise Banks’ cognitive changes and apprehension of a different perception of time through some really cunning editing (that manages to mirror what the story does in text, which is to mirror how the alien language is written). The age and manner of the daughter’s death changes as well, mostly for cosmetic purposes. It does away a little with the opportunity to question the determinism that rules the story, and changes the experience for some. Go in with appropriately tempered expectations.

Now, the aliens. This movie was not coy about its aliens. The aliens appeared just as they were supposed to, not only at the ending, not as some continual mystery—the mystery is their language after all. Their first appearance happens in mist and behind a glass wall. They look fairly organic. (They look vaguely like popular depictions of Cthulhu to me; others may get a distinct “yip-yip-yip” sense instead.) They have no faces, they do have the requisite seven legs, which appear to also be hands. While Banks names them Flapper and Raspberry in the original story, it is Donnelly (renamed “Iain”) who names them in the film: Abbott and Costello, delivered drolly so as to mask the effect of what happens when you name things: you get attached to them. So they are there, with body language, and they look alien and majestic and otherworldly.

The language is as alien and majestic and otherworldly as the aliens themselves. Martine Bertrand deserves major props for designing the alien language. And major props, too, go to whoever it was who came up with the design of the computer software that Louise then uses to try to shape her own sentences. More could have been done, perhaps, to complicate the semagrams formed by the heptapods even further, but the film’s solution to the problem of depicting the language and inserting them into the narrative smoothly is elegant.

Similarly, the soundtrack by Johann Johannsson is also well done: ethereal and noisome. The story describes the sounds of the aliens like this:

“The recording sounded vaguely like that of a wet dog shaking the water out of its fur. [ . . . ] The second half of the spectrograph for this utterance looked like a repetition: call the previous utterances [flutter1], then this one was [flutter2flutter1].”

The aliens don’t actually sound like a wet dog in Arrival. But they do sound like flutters, in a manner of speaking. They punctuate the soundtrack and the silences in the film, but are otherwise unobtrusive.

Amy Adams and Jeremy Renner were really very nondescript in the film, which is a strength. I could have wished that the protagonists be played by actors of colour, because whiteness is centered again, and Louise Banks gets a white savior narrative. But it’s tempered by the heightening of global and domestic violence: most of the people on-screen making fatal decisions are men. Louise is questioned but it’s nice that she gets to assert her expertise and the film centers on her and her interiority. The expected Hollywood romance does not burgeon—it’s background noise: taken for granted that you know what will happen, so no showy moments are needed. This knowledge punctuates certain moments with a poignancy that holds up on re-watching, if you are into that sort of thing.

Even with a cast like Adams and Renner, the movie doesn’t glamourize the characters. They’re everyday-normal; they get to look haggard and underslept. Even when Louise Banks is dressed up for a gala she still looks like a frumpy academic. (GO FRUMPY ACADEMICS!). The focus is always on her work, her strong desire to crack the alien language. There is something to be said about the fact that of all the linguists on the planet, a white woman gets the Chosen One arc, interprets the alien language and brings world peace, but this remains rooted in a larger context of world politics. Jeremy Renner on the best of days has the face of a rugged marshmallow, and he looks perfectly ordinary, so it makes sense why Louise chooses to live out the life she will have with him. Arrival’s Donnelly also has the pleasant role of the love interest who is there to prop up the main character’s arc—a subversion of the usual gender norms. There’s no real reason why Donnelly needs to be in the room with Banks as she speaks to the aliens, except to marvel at her breakthroughs and be her help meet. He finds a couple of things or two that push the story forward, but unlike in the original story, his role, and the science by which Banks arrives at her breakthrough in how to understand the language, is vastly diminished.

One might consider the experience of watching Arrival having read the story, or watching it without having read the story. It is enjoyable either way. Anecdotally, most people of my acquaintance who had read the story beforehand had not enjoyed it as much, but these are also the people with particular expectations of the film on which I doubt the medium is capable of delivering. Arrival remains a science fiction movie in a way that most science fiction movies right now, so focused on action and adventure, fail to deliver.

Like Loading...
© Copyright 2017 By: Jaymee Goh
About Jaymee Goh
Jaymee Goh is a writer, reviewer, editor, and essayist of science fiction and fantasy. Her work has been published in a number of science fiction and fantasy magazines and anthologies. She wrote the blog Silver Goggles, an exploration of postcolonial theory through steampunk, and has contributed to Tor.com, Racialicious.com, and Beyond Victoriana. She graduated from the Clarion Science Fiction and Fantasy Writers Workshop in 2016, and received her PhD in Comparative Literature from the University of California, Riverside, where she dissertated on steampunk and whiteness. She is a Malaysian citizen currently living in Berkeley, California, where she works as an editor for Tachyon Publications.
No comments yet. Be the first!