Reviews
Size / / /
Before by Carmen Boullosa, translated by Peter Bush
By: Nina Allan 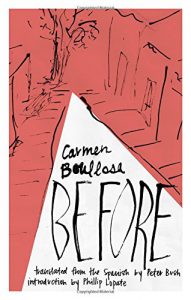 Sometimes I hear them being chased and they’re never caught. Or are they different ones? They shriek, are scared of what’s chasing them. They run, fly, will do anything to make their escape. It must be other girls each night, must, it must be, because nobody could escape, lest anyone deceive themselves, it is impossible to escape. One night I shouted to the desperate one, but she didn’t hear me. I prefer not to shout any more, it makes no sense and makes me ill. I am ill. I am so afraid. I’m so afraid and can’t shout Mom. It’s a cry I can’t utter, because I don’t possess that word.

Originally published (as Antes) in the author’s native Mexico in 1989, Before appeared for the first time in English only in 2016, in a translation by Peter Bush from Deep Vellum. Carmen Boullosa has published eighteen novels to date, as well as poetry, plays, and journalism. Celebrated in Latin America, as a non-Anglophone author she is less well known outside of her homeland: a familiar story, especially among women writers. With this newly available novella, a ghost story hidden inside a memoir (or is that the other way around?), we can finally add her name to those of others such as Clarice Lispector and Angelica Gorodischer, women with an important part to play in shaping our understanding of the possibilities of speculative fiction.

We begin with a statement of ghosthood. Our unnamed narrator presents us with a vision of children playing by a lakeside, then claims that she was once "like those children … like one of those awkward children," but that she is now "cut off from their world forever." She goes on to describe her mother on the day of her own birth:

That day she was paler than usual and when I saw her for the first time every small feature reflected the fear I never imagined would spring upon me and lock its jaw. Her name was completely different to mine. More resonant, a name I’d give to a son if I had one. Her name was Esther. Although I’d always seen her in a very distinctive light, I loved her as much as if she were my mother.

This simultaneous claiming and rejecting of Esther, a passionate love twinned with terrible foreboding, are the dual leitmotifs that characterise Boullosa’s novella and help us form an understanding of its themes and intentions. Our narrator’s insistence that she has "always" seen Esther in a very distinctive light must lead us to the conclusion that this is no ordinary memoir, no ordinary coming-of-age story. It is written after the event, from an adult perspective of knowingness. But what is this fear that "springs upon [her] and locks its jaw"? Children are afraid of many things, largely because the world is still mysterious to them and therefore terrifying. Our narrator’s fear though seems born not out of ignorance, but out of foreknowledge. This fear soon takes on tangible presence, in the form of footsteps that seem to pursue her everywhere, and relentlessly, and that only she can hear. Early in the novella, our narrator remembers an episode in which she attempts to rescue a turtle destined to be turned into soup for Esther’s birthday:

I stroked her shell with her head resting on my shoulder, stroked her rough feet that were too short, and we could no longer hear the noise we were pursuing. Not one step more. Confidently, feeling powerful, I took the turtle to the kitchen terrace. I opened the door, left her on the ground, soothed and I think also exhausted after her long run. I gave her a little water in a dish, shut the door and went back to bed, surrounded by a pleasant silence.

The turtle is both a comfort to her and a mission, protected and protector. In saving it from a cruel and untimely death, our narrator feels she has also saved herself, outrun the mysterious footsteps of fate, only later to see a vision of the turtle, decapitated and bloody, the safe space of the terrace violated, the soup made. Further memories blossom, a sinister accretion of microaggressions, misunderstandings, and reversals, culminating in an episode of school bullying in which she becomes the victim of three older girls who single her out for a painful humiliation:

I didn’t see them leave. Without them the toilets seemed darker. I took my sweater off and pulled up my school blouse. By twisting my head, I could see my nylon petticoat in the mirror, burnt, a gaping hole revealing an expanse of back. As I pulled my blouse up, the soaking ball of paper fell heavily to the floor under the weight of trapped water. I straightened my clothes. I looked for my panties and couldn’t find them on the ceiling or on the floor. I returned to my math class and tried to concentrate on fractions.

The world inhabited by our narrator is itself a duality: comfortable yet dangerous, familiar yet unpredictable and deeply disturbing. In Boullosa’s hands, ordinary domestic objects take on the characteristics of weapons, harmless banter becomes insidious and threatening, ink stains on a white blouse metamorphose into poisonous spiders. Surrounded by family and friends who cherish and shelter her, our narrator still cannot help but feel alienated, constantly terrified, and bleakly alone. In a world where the future lies only a step away, even games become a matter of life and death. The theme of pursuit is a constant, those mysterious footsteps, harbingers of fate, death, adulthood, and change, are inescapable. Above all, our narrator fears losing the ability to dream, a death of the imagination that seems inextricably linked with the onset of puberty, which in its turn appears as a reminder and recapitulation of the unresolved trauma of her mother’s death. The story culminates in the death of the narrator as she starts her period:

I saw Dad come out and shout my name in the garden. I heard him run to the phone, I saw him (how did I see this?) find me in bed, in my pajamas, with my clothes scattered untidily over the floor … I was asleep, or rather, she, his daughter, was sleeping forever, in flannel pants soaked in blood, her face set in an undeservedly serene expression.

The doctor could not tell him why I had died.

Yet the narrator’s very knowingness leads us to question its reality. Is her demise real, or merely symbolic, a passage to adulthood? Would our narrator, in the end, rather believe herself to be a ghost than wake up motherless in a world where she can no longer access the magical, the speculative, the ineffable, secret life of the imagination?

The introduction to the Deep Vellum edition of Before, by the celebrated essayist Phillip Lopate, perfectly describes Antes as "a haunting and haunted novella … teetering between humour and panic." He also reminds us that Boullosa, like our unnamed narrator, was born in Mexico City in 1954, and that her mother died when Boullosa was just fifteen. "Turning herself into a ghost," Lopate says, "and refusing to acknowledge that her mother is her mother would be two ways to avoid the full impact of that grief":

I peered out of the door and saw two nurses carrying Esther on a stretcher. Esther (can I say Mom at this point in the story?) turned her head around to see me. I ran after her. The stretcher-bearers stopped. Her head turned around, lips half-open, she said, "Poor little thing," and burst into tears as well; oh Esther, I loved you so much, so much, Mom, Mom, Mom, Mom …

Reading Before is like being made to live inside someone else’s dream. Not the artificial and typically dull "dream sequence" so beloved of certain horror novelists, in which dreams are used as the deus ex machina to resolve those parts of the plot that could not otherwise be logically explained. Boullosa’s writing miraculously encapsulates the texture of a real dream, in which obscure and inexplicably unsettling images wrestle with everyday normality in a battle for supremacy within a landscape that seems forever on the verge of dissolution. If Before is a narrative of doubling, the novella’s key duality is that liminal space that exists for the writer between art and life, between memoir and story. It is almost impossible not to read Before as an act of mourning, a final, wrenching love letter from a daughter to a mother who is no longer in this world. Equally though, it is an artist’s meditation on the fragile nature of creativity itself, on the necessity of retaining the instinctive, the visionary, the childlike, the melancholic, those sparks of the monstrous and the divine that are the building blocks of a writer’s process. On the fear of those insights waning, or dying altogether.

As an indication of Boullosa’s intentions for Antes, we need look no further than the novella’s epigraph, by Rubèn Dario:

The pain of not being what I should have been, the
Loss of the realm that was made for me,
The thought that at one moment I might not have
Been, the dream my life has known since I was born …

At fewer than a hundred pages, Before is a slim work. Yet in the complexity of its vision, its richness of expression, its hypnotic power both to enthrall and to appall, it carries the purpose and depth of meaning of works three times its length. That Boullosa has chosen the ghost story as the vehicle for so personal an elegy seems entirely natural and right. That a ghost must by its nature exist simultaneously in two worlds—the world of matter and the world of the imagination—is something universally understood. As a metaphor for the life of the writer—both here and not here—the ghost trope is pleasingly unsettling. The clusters of magical-realist imagery that jostle for attention across the pages of Before—headless turtles, enchanted wardrobes, sisters who claim to be angels, and fathers who claim to be kidnappers—are similarly potent, similarly effective in conveying our young narrator’s heightened state of awareness, a grief that is the wellspring of story, and that cannot be assuaged.

Like Loading...
© Copyright 2017 By: Nina Allan
About Nina Allan
Nina Allan's stories have appeared in numerous magazines and anthologies, including Best Horror of the Year #6, The Year's Best Science Fiction #33, and The Mammoth Book of Ghost Stories by Women. Her novella Spin, a science fictional re-imagining of the Arachne myth, won the BSFA Award in 2014, and her story-cycle The Silver Wind was awarded the Grand Prix de L'Imaginaire in the same year. Her debut novel The Race was a finalist for the 2015 BSFA Award, the Kitschies Red Tentacle, and the John W. Campbell Memorial Award. Her second novel The Rift was published in 2017 by Titan Books. Nina lives and works on the Isle of Bute in Western Scotland. Find her blog, The Spider's House, at www.ninaallan.co.uk.
No comments yet. Be the first!