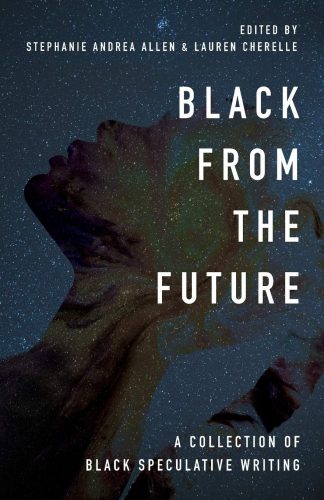 Black from the Future is a speculative fiction anthology composed exclusively of writings by Black women. Fourteen short stories and six poems weave the reader in and out of the fantastical lives of Black women and girls through time. The works in this collection focus on the strength and resourcefulness of the characters in them while also drawing attention to a sort of ironic mundanity that binds them. The desire to belong, to be loved and protected—most importantly, to protect oneself—is so fundamentally human that it is easy to connect with the characters on an intimate level, be they human or otherwise. At times it is difficult to be fully immersed in the various worlds brimming inside this collection due to a jarring pattern of fourth-wall breaks that do more telling than showing. However, the stories told in this collection represent important contributions to Black speculative fiction and create engaging worlds that sometimes feel closer to reality than fiction, in both frightening and energizing ways. Sampling from the breadth of stories and poems in this collection, I’d like to demonstrate how many of its stories are particularly well-executed—but I’ll also leave room for some that fell short.

It is clear that Black from the Future is an anthology that makes no apologies about being by and for Black women, on centering Black women’s experiences in the world. As a Black woman reader, though, some stories felt as if I was not their intended audience; instead, they seemed to have a below-the-surface sense of urgency in convincing the reader that Black women’s marginalization does in fact exist, or otherwise spelling out aspects of culture in an elementary fashion. Moreover, while the poems serve to bookend the major themes amongst these stories (being saved, saving each other, and saving ourselves), they feel overall out of place.

Jewelle Gomez’s “Caramelle 1864,” however, serves as a strong, alluring opening. Here we meet Elisabeth, a young girl who aids her father in helping Black people flee the South for hopefully greener pastures in the North. This story so beautifully constructs the relationship between Elisabeth and Caramelle, a young girl of similar age but much paler skin who has a short stay with Elisabeth and her father, that it is easy to forget that the story is speculative fiction. This is a strength, though, because the story uses its speculative elements as a vehicle for reimagining what freedom and protection might look like for enslaved and recently enslaved people. “Caramelle 1864” offers a departure from traditional stories of the undead that tend to be similarly set in the past, but which focus on implicitly white characters whose struggles are meant to be an allegory for real-life racism. Instead, we get a thought-provoking story similar to Tania James’s recent reimagining of the Greek myth, “Medusa.” in which something traditionally conceived as a curse can be the ultimate gift. Elisabeth describes her father as a man of quiet complexity, yet “freedom was always his goal” (p. 7). This statement succinctly describes the powerful driving force that permeates each story in this anthology.

For all the work that “Caramelle 1864” puts into creating an overarching mood for the anthology, Kivel Carson’s “The Night Has No Eyes” shifts gears in a jarring way. Early on we meet strange, vicious creatures who come out in literal defense of our main character—who is experiencing overt, but not necessarily physical, hostility from prejudiced patrons at a rest stop in the middle of nowhere. The violence in this story felt gratuitous given the constrained nature of both the dialogue and inner monologues. Incredibly powerful moments of interiority like, “It’s incredible to be pierced with eyes that can never quite meet your own, and to be watched without really being seen” (p. 33) are made somewhat lethargic by strained dialogue between the narrator, Zora, and Simone, a woman also caught in the crosshairs of a brutal slaying. Zora becomes less authentic as she has long moments of exposition in which her culture is made the object, not the subject, something to be painstakingly explained instead of shown and embodied.

Carson foregrounds the speculative aspects of her story to a greater extent than Gomez, and that at least is not one of its weaknesses. Similarly, “Night Crawler,” a poem by Vernita Hall, beautifully bookends the first section of stories that feature tried and true speculative fiction creatures—ones that are both of this earth and others from seemingly faraway places. “If I bare my fangs/I’m sure I could rip out a throat or two” (p. 92) perfectly encapsulates how these stories use monsters in ways that call back to familiar speculative fiction elements—the monsters come to save you in both predictable and unpredictable ways. One such monster appears in “Miss Beulah’s Braiding and Life Change Salon” by Eden Royce. We don’t know what Miss Beulah is, at least not in a literal sense. But that is irrelevant, because Miss Beulah is many things to the clients that come sit in her chair and get their hair done.

Featuring beautiful imagery and a show-don’t-tell style of unfolding, Royce’s story characterizes the Black hair salon as a site of replenishment and escape for Black women. Choosing this atypical setting within speculative fiction at large, Royce introduces something new into two separate spheres, bringing them together beautifully—she introduces the Black salon to speculative fiction as well as asserting its importance within larger conversations about Black social spaces. Whereas Black barbershops tend to dominate narratives of cultural hubs and respites for souls made weary by the ever-present burden of racism, Miss Beulah represents the Black woman’s burden—the double-edged sword of pouring so much into others at the expense of ourselves.

What this anthology does well is to both aggregate stories around distinct themes while also bridging across them to draw connections and create a deeper feeling of cohesion. For example, Stefani Cox’s “Therapies for World’s End” in the middle of the anthology provides some answers, and raises more questions, to feelings stirred up by “Miss Beulah’s Braiding and Life Change Salon.” Both stories offer an alternative path toward healing and freedom than some other stories toward the beginning of the anthology—communal healing. The former deals more explicitly with an existential crisis of desperately desiring healing while having become so accustomed to pain and brokenness that restoration feels viscerally wrong; beings like Miss Beulah are one solution to dealing with this contradiction. Likewise, “After School Special” by Tyhitia Green calls back to “Caramelle 1864” as well as forward to Maya Hughley’s “Flyover.” Nicole D. Sconiers’ s“The Eye of Heaven,” meanwhile, features a unique, not-too-parallel universe in which sunlight and melanin develop a frighteningly adverse relationship catalyzed by the literal commodification (and, likely, genetic exploitation) of melanin and the bodies that are more saturated with it. Although the women and girls in this story become physically sick from a mysterious illness, the loss of community acts as yet another ailment that erodes emotional wellbeing.

These stories offer reimaginings of paths to freedom through a speculative: transforming into something else (“Caramelle 1864”) or harnessing a power buried deep inside (“After School Special,” “Flyover,” “The Eye of Heaven”); staying and fighting (“Caramelle 1864,” “After School Special”); or leaving (perhaps, returning) for home (“Flyover”). Expository dialogue in “Flyover” is somewhat forgivable due to its child/adolescent protagonists, but it is a technique that ultimately pulls the curtains back yet again—and holds the reader’s hand to guide them to the point rather than letting us infer it for ourselves.

All four of those stories, too, wrestle with a theme that is reflected in almost all of the works in this anthology—that when existing structures in society do not protect you, you must protect yourself, and each other. When two stunning poems, “Sirens” and “The Conjurer’s New Gospel,” bring our journey through the collection to a close, we are left to sit with what it means to possess formidable power and self-preservation ingenuity amidst bleak realities. Overall, Black from the Future is a much-needed addition to speculative fiction and Black women’s fiction at large.

A drawback to a lack of diversity in perspectives within genre fiction is that new works often carry an undue burden, a burden that can be felt at times throughout this anthology. There is an ebb and flow of push-pull between permitting the stories to just be, and acknowledging both external and internal pressures to be more, or many things at once. With these elements in mind, Black from the Future is an overall captivating read, simultaneously wrestling with distinct aspects of Black women’s and girls’ experiences, while also grappling with like aspects from unique perspectives.

Anahvia Taiyib is a writer from New England currently living in Tennessee with her dog, Cinnamon. She is a Tin House Summer Workshop alum, and her poetry is featured in WomenArts Quarterly Journal. Her website is anahviataiyib.com.