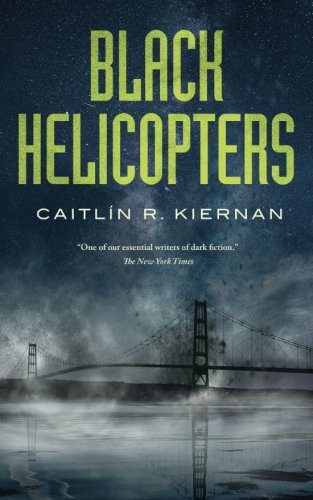 I have heard Caitlin R. Kiernan declare herself against plot, and especially against plot-as-foremost-concern. She is a writer of mood. Black Helicopters is about static. As in Agents of Dreamland, static is the de facto state of the universe, and sifting through it is the unhappy task of those whose thirst for understanding is greater than their fear of the attendant madness. There is a plot, mostly. And it is saying something about the world, something unequivocally pessimistic but not totally despairing, since it encourages both survival and curiosity. And there is drama in spades, all kinds of Lovecraftian black-ops agents and assassins circumnavigating the globe and trying to glean secrets from the aether and each other.

Apophenia seems the most common mental affliction among Kiernan’s characers: the tendency to see meaning where no meaning exists. Except ... there are patterns here. Threads, really, but do those threads add up to a tapestry, or just a tangle? The whole of the novella is an exercise in the reader's own apophenia; you spend the whole time engaged in sense-making, never totally sure that the threads you have gathered will be enough to hold the weight of the meaning you suspect might be there.

For example, it always takes a little while for me to get into the cadence of Kiernan's dialogue, which at first feels needlessly confrontational and counterproductive. Why do all her characters argue about nothing? Ptolema, our first POV character, starts out arguing with herself and her distant superiors in her head, before two other agents (or double-agents or maybe even free agents) come to snipe at her in turn. But that's Kiernan, take her or leave her. If it helps, think of it like Tarantino—dialogue for dialogue's sake—though she's no imitator; she's entirely herself.

And, all right, twitchy on-edge secret agents are bound to be grumpy, and Ptolema gets down to brass tacks soon enough. We get a glimpse of some kind of conspiracy around a game of chess, the white queen versus the black. But who—or what—are the queens, and what is the nature of the game? We know only that it has something to do with a mysterious pair of twins and maybe a disaster on Deer Island, which has been quarantined. Something has fallen from the sky and warped the very reality of the place, and all efforts to restore it are failing.

Secret agencies, like eldritch beings, have their own agendas. They also lack the capacity to care for or even understand the individual. Agents of X, of Y, of Albany, or of nobody are used up and tossed out, to say nothing of civilians who are only ever ignorant victims. This horror of government is certainly understandable in the current nightmare that is American politics.

(Also, I just have to say that I grew up near Albany, NY, and I'm tickled that it's the fictional headquarters of an anti-Cthulhu agency (ACA? That's also the acronym for the American Counseling Association, which, again, tickled). It is the last place anyone would look for anything interesting to be happening, but also, if you want your agents to avoid going insane, maybe don't start them at such an obvious disadvantage.)

In the midst of all this, Kiernan's prose is, as ever, asymptotic. She only ever approaches concepts, often describing them several ways, but never hits on them—because the things she's describing are fundamentally beyond human ken: warring entities that drip from the sky and make the sea into a sentient, sucking ooze; twins who are one but also two who exist to play a game beyond time. She understands that the paradox of Lovecraftian writing is not so much getting it right as gathering together the things that are least wrong, and then dropping them like breadcrumbs for us to follow to the edge of the abyss.

But it's not just one trail we're following. The narrative is fractured across time, and there are all kinds of verbal flotsam and jetsam littering it, making static that might just mask a meaning—or nothing at all. She skitters between languages, Finnegan's Wake-style, even when those languages obscure rather than reveal. Which I suppose is the point, but it gets a little tedious at times. (Google Translate makes Modernist linguistic dilettanteing less impressive.) But repetition is a key on which this locked book turns, and Kiernan draws on foreign languages and nursery rhymes and literature and great scientific conundrums alike.

Having followed Kiernan's career for more than a decade now, I can say that another of her personal inspirations is the little-g gothic, the brooding subculture that still makes itself known via her inclusion of fey albino women and transgressive eroticism. I liked the mashup here of the uncanny with what has traditionally been a macho sub-genre of military SF, since it undermines all that testosterone. Women with mental illnesses and kinks are the ones who save us (for some definition of “save,” anyway); women with PhDs and reluctant bureaucrats are the ones running the show. There are a number of women of color, most notably Ptolema, but also an African-American supersoldier who singlehandedly holds down Deer Island against the invasion.

But there is also an unfortunate fetishization of albinism and, at one point, a suicidal Japanese girl. Do I think Kiernan is smart enough to be making a thoughtful point? Yes. She is clearly making points about voyeurism and Orientalism and the exploitation of women. Ought we still engage critically and say maybe this is not entirely effective? Yes again. The Japanese girl's death is broadcast in the Atlanta chapters, which I found the least effective of the book. Furthermore, Kiernan's jargon-speak is self-conscious and slips frequently back into her hyper-precise, ultra-literary mode. It's the kind of slang written by someone who capital-A Appreciates A Clockwork Orange but can't stand actual day-to-day slang and so doesn't give it realistic cadence.

To repeat: repetition (see what I did there?) can have meaning, but its elements, taken out of their context, do not always serve as synecdoches. They don't bolster sense, they become nonsense. And nonsense spreads through these pages like a stain. Reading this novella is an active effort against that tide, and the reader is forced to pick only certain phrases or ideas to hone in on. Otherwise, there is too much, and it all becomes static.

You can't read this book while tired, or with too many expectations, or with a closed mind. This is not a book for all occasions, or even all people. I say this not to declare myself a member of an exclusive club, but as one who sometimes struggles to appreciate Kiernan's work when there is so much else that is more accessible. It's a strange thing, to find someone not trying to maximize their audience. To be—maybe—a little unappealing. To be intentionally obscure.

Frequent readers of Kiernan’s work will see her usual sources, T. S. Eliot and Lewis Carroll, lending her narrative even more echoes. But Eliot liked being obscure. It put distance between himself and the unwashed masses, and distance between himself and his hated pedestrian job. James Joyce delighted in the obfuscation he had wrought with Finnegan's Wake, gleefully proclaiming that he was going to keep scholars occupied for a century. (He was right and then some.) Lewis Carroll was a noted master of nonsense. All of these and more are Kiernan's clear inspirations along with Lovecraft, whose dissonance with reality tipped over into the conviction of cosmic absurdity.

But obscurity has fallen out of fashion. "Oh Lord, please don't let me be misunderstood" is the anthem of most everyone's tweets and posts and comments, endlessly describing and clarifying the pinpoints of each life. So it's discordant to hear Kiernan's clash and grumble refusing to join the choir, to read something that doesn't care to lay itself bare. There is ample room in this book to misunderstand. I can't say it's always a pleasant experience to be at Kiernan's loose ends, but it can be a compelling one.

Like Loading...
© Copyright 2018 By: Christina Ladd
About Christina Ladd
Christina Ladd is a writer, reviewer, and librarian. She lives in Boston. She tweets using the handle @OLaddieGirl.
One comment on “Black Helicopters by Caitlin R. Kiernan”

Kiernan thinks you got some thing wrong in your review. https://greygirlbeast.livejournal.com/1381242.html