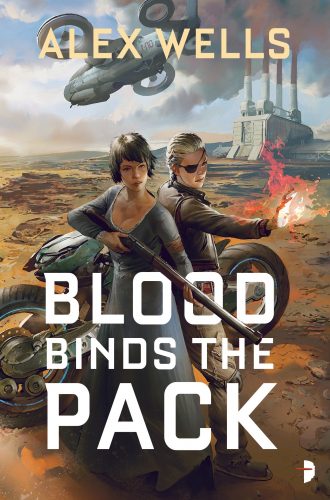 I’m beginning this review of Blood Binds the Pack, by Alex Wells, on the day that the United States Supreme Court decided to uphold President Trump’s “travel ban”; an abhorrent anti-Muslim policy that leans on preexisting, unfounded fear and means to dredge up more. It’s a few days after news broke that families entering the US from Mexico and Central America have been separated. It is unclear when, if ever, these children will be reunited with their families.

It’s a time that’s caused me to think a lot about the value of individual and collective action. I’ve had multiple conversations with friends about how we expected we’d be the heroes when the bad guys came to power, how all of our favorite stories were supposed to train us for something like this, which was one of the reasons why we called these stories important—but now, even with those stories, we feel powerless and afraid. Even collective action sometimes feels futile. What does protesting really do? Does it change the Supreme Court? Scare Trump’s cabinet members into no longer trying to dismantle the agencies they head? What can we, people who care but who are so small, do?

Then there’s the fact that much of this is not new, that it rises from what’s been true in America since even before it was a nation. (One thing that keeps coming to mind is immigration quotas; their spirit sanctioned again by the Supreme Court and by Trump’s treatment of Hispanic migrants. These quotas were responsible for so, so many deaths—and now they will be again.) How do we account for that history, and of necessity our complicity with it, while coping with the situation at hand?

These questions are a part of why Blood Binds the Pack is, for me, an important book to read now. It provides both succor and motivation, while also containing biker gang witches and a blood-summoned, part-stone, and strangely sexy individual named the Bone Collector, a mysterious denizen of Tanegawa’s World who became an important ally to Hob in Hunger Makes the Wolf. It is a more than worthy sequel to Hunger Makes the Wolf, allowing both Hob and Mag to come into their own while exploring more of the political machinations that drive the world’s problems. To that end, it’s also about unions and the power and importance of organized labor. (I’m writing part of this review, in a sick thematic coincidence, on the day when the Supreme Court decided to rule against unions charging fees to nonmembers, which is not only a huge blow to workers across the nation, but a reminder of the fact that unions give people power, both on Tanegawa’s World and in our own.)

Blood Binds the Pack is organized around one primary plot element, and follows its characters as they cope with that structure from all sides. Tanegawa’s World, where Hob, Mag, and their friends live, is home to the mineral that fuels faster-than-light interstellar travel. TransRift, Inc. has a monopoly on interstellar travel, and is determined to suck the mineral out of Tanegawa’s World with absolute disregard for the people of the planet—or the planet itself, a point that becomes particularly relevant near the end. Shige Rollins, superspy and brother of Hob’s gangmember Coyote, tries to lead TransRift into sabotaging itself just in time for an inspector to arrive from Earth. The Bone Collector and the newly witchified Coyote attempt to understand the nature of the world that has given them their powers. And Hob and Mag both work to try to stop TransRift in its tracks as best they can, while dealing with the bizarre things they learn from The Bone Collector and Coyote. Hob works through raids and sabotage, while Mag takes action by organizing a strike across as many mining towns as possible.

Mag must simultaneously reckon with her newfound witchy powers, which allow her to perform a type of mind control by “pushing” on other people’s wills. This is a difficult thing for Mag. She rebels against the idea of forcing other people to do things, and finds herself targeted by hate-driven bigots once she decides to be honest about her powers. Blood Binds the Pack avoids easy answers here. The novel does make it clear that hating witches is bigotry, but Mag does force herself use her powers in violent, brutal ways that are for the furthering of her cause. Hob’s point and shoot methods can feel a little more romanticized and less examined, but that is also because Hob feels differently about them than Mag feels about what she does. Hob finds strength in her role as a Ghost Wolf; when asked to do something that isn’t looking an enemy down the barrel of a gun, she feels uncomfortable. Moral compunctions don’t enter into the equation with Hob in the same way, both because Hob is more convinced of the righteousness of her cause and because Mag is dealing with enemies on an individual level, one-on-one.

It would have been interesting to see a more direct discussion about this between these two characters. Hunger Makes the Wolf left me wanting more from Mag, but now that I’ve gotten it, I want to see Hob and Mag working together in the same place more often, not just crossing paths when disaster makes it necessary. They’re compelling together because their strengths are so different, and in a book concerned with what different strengths mean, the danger that comes from fearing your own strength, and with when harsh action is or isn’t justified, I would have liked to know how Hob and Mag understood each other’s moral choices.

The Bone Collector, oddly enough, is the one who learns to understand Hob and Mag in ways that touch on their particular insecurities and strengths. This is because these insecurities and strengths match the Bone Collector’s own. He and Hob have an undeniable chemistry that neither of them—but particularly Hob—seems to know how to deal with. Watching the two of them learn to understand each other is one of the sweetest pleasures of the book.

The Bone Collector and Mag come together for more plot-related reasons. Due to the Bone Collector’s particular relationship with the magic of Tanegawa’s World, he and Mag are able to connect to each other in a dream, where each of them feel the other’s presence. It isn’t something the Bone Collector expects, or even understands at first, which is a nice way of making the Bone Collector more fallible and human. But it is a moment that ultimately strengthens both characters; there is a community and a sense of purpose there. Blood Binds the Pack takes care to make us understand its primary characters; their struggle is a struggle that is made up of people as complex as they are, and by making us care about these characters, we understand their care for the people they know, and so on[1].

Blood Binds the Pack also takes care with its sections about unions (there is a short bibliography in the back of the book with pertinent sources.) There is no shying away from the difficulties and day-to-day issues of organizing, which is one of the things that makes the book so relevant at this particular moment. There are a great number of speculative fiction novels that deal with oppressed laborers, but I have not encountered many that go into this level of detail, nor that are so obviously based on detailed research. It would have been exciting even without the Supreme Court coming in to reinforce it.

Blood Binds the Pack shows us the importance of unions, but also shows us some behind-the-scenes corporate evil, which makes for a lot of fun. TransRift—on the rather incredible suggestion of Shige—decides to force miners to swap out their currency for company script, which ends up being the final straw for many of the miners. Shige suggests this to his boss, Jennifer Meetchim, in an effort to make a particularly nasty picture for the inspector’s surprise visit. Meetchim agrees with a callousness that would seem like something out of an anime or the Evil League of Evil if it wasn’t the sort of rhetoric that Americans have become used to hearing every single day. When Meetchim hears of the miners’ impending strike, she says, “Break them up over a hundred dig sites where they’re stripped of resources and they’ll remember that they owe us their very lives. Like all tantrums, this is a performance … and there’s no one but us here to see” (232). No one more powerful, she means, no one with oversight. This, of course, turns out not to be true, but it is easy to imagine how this story would have gone if the inspector wasn’t on the way. It is also easy to imagine how this story has gone so many times before.

It might be that Meetchim is too two-dimensional, too easy a villain, but there is a certain force, I think, to calling things evil when they are. Is it possible to maintain a balance between doing so and also making sure to not dehumanize people? I’m not sure, but I hope so. Even if Blood Binds the Pack doesn’t quite succeed at this, it certainly takes a shot at it, while never shying away from the horrific and despicable when it arises. It is a book that asks questions honestly, with an investment in doing right by its world and in our own. It is also a hell of a ride.

[1] I am currently part of the way through one of my regular rewatches of Fullmetal Alchemist: Brotherhood (as well as my first-ever read of the manga itself). Its multiple resonances to Blood Binds the Pack are difficult for me to leave out of this review entirely, so I’ll just say that this methodology reminds me of something Colonel Roy Mustang says about how to fix his broken country: we care for those we love, and they do the same, and so on. “It seems like the least we tiny humans can do for each other.” The relationship between this idea—of improving individual lives—and of taking collective action is something that seems crucial to consider both in real life and when reading Blood Binds the Pack.

Like Loading...
© Copyright 2018 By: Phoebe Salzman-Cohen
About Phoebe Salzman-Cohen
Phoebe Salzman-Cohen is a PhD student studying fantasy and science fiction, along with Homeric Greek. She enjoys writing stories about sentient fog and magical fireworks, and plays as many RPGs, tabletop and virtual, as she has time for. You can contact her at
One comment on “Blood Binds the Pack by Alex Wells”

One has only to look at the cartoon villans running the country right now to realize that in many cases evil doesn't always come with complexity.