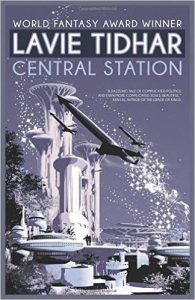 "Central Station, that vast space port which rises over the twin cityscapes of Arab Jaffa, Jewish Tel Aviv" (p. 6): this is the main setting in Lavie Tidhar’s eponymous novel—or, rather, his interconnected collection of episodic short stories—and it’s big enough to have its own miniature weather system. Built by immigrant workers from all nations, it is described as "a miniature mall-nation, to which neither Tel Aviv nor Jaffa could lay complete claim" (p. 42), working as a sort of buffer zone as well as a cultural melting pot that offers everything from snack food to religion and/or body modification:

It's a place where you can make or spend money: in the virtual secondary universe of the Guilds of Ashkelon alternative reality game, people don’t just relax and let off steam but also earn cash to sustain them in the real world; likewise, you can buy and sell real estate both real and virtual (p. 40). You can get an adaptoplant house that sprouts tree-like from the asphalt and sheds layers in autumn (p. 59), or you can just pass through on your way to the Chinese colonies on Mars or beyond.

The people who inhabit these places and/or move through them share a heritage as diverse as the port's. One of the central, recurring characters is Mama Jones, "who had been born in this land, in this city that had been called many names, to a Nigerian father and a Filipina mother" (p. 8). Besides her, we get to meet tentacle junkies, derelict robot soldiers, and "alien symbionts no one understood, and few wanted to" (p. 12). There are gene-tailored children who exist half in the physical world and half in the virtuality of the Conversation, the implant-based, full-sensory near-future Internet of the place—which is home, too, to a form of non-human machine intelligence referred to as the Others. There are also humans who modify themselves to be Other-human interfaces.

Apart from the amazing world-building, it’s all about the meeting, intermingling, and interacting of many cultures (human and non-human is a purely science-fictional distinction). And in chronicling the place, Tidhar acknowledges that the concept of culture, especially seen over time, is really fluid and diverse: "[Zhong Weiwei] knew his children would be different, and their children different in their turn" (p. 45). Via the Weiwei family's shared virtual family history we get to watch generations increasingly grow up in a blend of physical and virtual spaces: migrating, changing the spelling of their surname, adopting new languages and religions.

Here, in between, there were still those people of the land they had called variously Palestine or Israel and whose ancestors had come there as labourers from around the world, from the islands of the Philippines, and from the Sudan, from Nigeria, and from Thailand or China, whose children were born there, and their children’s children, speaking Hebrew and Arabic, and Asteroid Pidgin, that near-universal language of space. (p. 11)

People wear clothes with tiny solar panels sewn in, for functionality as much as for fashion. And apart from the mix of languages and dress-senses, we're also confronted with the various religions people bring with them, develop anew, modify, or let fuse into a new whole. Some believe in reincarnation or the afterlife, others choose "the mythical Upload, what they called being Translated" (p. 47), living on as a recording in the Conversation.

Moreover, the book is teeming with literary references—some quite easy to spot, others less so. Louis Wu (first mentioned on the twenty-ninth page) is borrowed from Larry Niven’s Ringworld series. The robot prayer, "Our maker who art in the zero point field, hallowed be thy nine billion names …" (p. 109) is an obvious reference to the classic Arthur C. Clarke story "The Nine Billion Names Of God." A mention of prophets in the desert naturally leads over to a brief passage featuring sandworms, even though Tidhar's "giant sandworms of the Sinai" (p. 127) differ from Frank Herbert's Shai-Hulud in description and background. We encounter data vampires called Strigoi or Shambleau—one word referring to the undead spirit haunting Romania, an early European vampire, the other to a short story by American science fiction and fantasy writer C. L. Moore, which is in turn a retelling of the Medusa myth.

Indeed, one of the central recurring locations in the book is a library and sometime bookshop whose owner is obsessed with twentieth-century pulp paperbacks. The shop, and the book in which it appears, is Fantastika as an archive, as self-enclosure and infection. Above all, it’s a demonstration of an all-encompassing love for fantasy and science fiction literature. This is also somewhat reflected in the writing style, which sometimes veers toward a semblance of one of these pulp novels, as when somebody’s "heart beat[s] a fast tattoo of an unfamiliar rhythm" (p. 22), or when the road-cleaning machines pass by, "a low hum of gratitude filling the air as they [glory] in this greatest of tasks, the momentary holding back of entropy" (p. 24).

However, lots of isolated passages and sentences can be read totally decontextualized from both the genre Tidhar is writing in and from fiction itself. They illustrate what science fiction does best—give a vivid impression of actual people’s lives in places and/or situations that often leave them at a loss for words. The writer’s task, to paraphrase Ursula K. Le Guin, is to say in words what cannot be said in words. Tidhar is giving us glimpses into the lives of people between cultures—people who sometimes feel lost, who sometimes find each other before they lose each other again. Everything is transient, and "[t]he only rule of the universe, child, is change" (p. 224).

Thus, it’s routine to find in Central Station narratives of migrants and refugees:

She was old before she was young. Her escape from home brought with it no freedom, only a new kind of imprisonment. (p. 88)

[He was from] that region called the Middle East (but east of what? middle of where?), a place called Central Station. (p. 100)

There are descriptions of disease and the concomitant social stigma – but also characters who step in to defend the victims of violence born from stigma.

She, Carmel, had just wanted to leave home. She wanted to see what the rest of the worlds looked like. Instead she became sick before she ever got off the ship. And it was a sickness without a cure, an affliction the only way out of which was death. (p. 97)

There are also stories about forbidden love, about desire that transcends convention, which can be read as parables for transcultural relationships, or relationships across religious or class boundaries, or as queer. And there are the ubiquitous stories of war:

He could no longer remember the wars he’d been in, he assumed they were given names, that in some historical record they were placed down reverently, dated, placed into context. All he remembered was the pain. (p. 120)

But stories are malleable in the retelling, and real life is messy and resists being made to fit into clean narratological concepts. Tidhar acknowledges this and weaves it into the characters’ memories and outlooks on life. Even when it gets a bit nostalgic, there is always a hint that nostalgia is false and too easy, and that escapism doesn’t work.

There comes a time in a man’s life when he realises stories are lies. Things do not end neatly. The enforced narratives a human impinges on the chaotic mess that is life become empty labels, like the dried husks of corn such as are thrown down in the summer months from the adaptoplant dwellings, to litter the streets below. (p. 168)

Yes, there is a plot, and it’s about changing societies and changing people, about shifting power relationships and interdependence and communication. New chances. Possible futures. Not as extrapolation, as in predicting technology, but as speculation about people, cultures, coexisting.

Sometimes we are offered tiny glimpses of utopias, and they are always technically achievable—but in order to arrive there, nation states and cultures need to work together. Some of them may seem small and personal but would mean a big step in politics of equality—like "Mrs. Lepkovitz and her two husbands […] waiting in the birth reception area" (p. 268); others are giant living symbols of potential future peace and coexistence:

They circled the city [of Jerusalem] without going in and drove along the circle road, between a Palestine on one side and an Israel on the other, though the two were often mixed up in such a way only the invisible digitals could keep them apart. The torn remnants of an old wall lay peacefully in the sunlight. (p. 259)

From story to story, the perspective shifts between various characters of various genders, nationalities, and religions, but we keep encountering the same places and characters, whose lives in and around Central Station are interwoven. And recognising them from a new position adds layers to them, sometimes criticising them, and/but always rendering them more complex, more human. Central Station moves all the way from soap opera to mythology (visiting other genres in between), but it is still most enjoyable when a clear plotline has yet to develop, and it’s just people’s daily lives and routines and chance encounters, meandering and briefly touching and then separating again for a while, until they touch again.

Like Loading...
© Copyright 2016 By: Christina Scholz
About Christina Scholz
Christina Scholz is based in Graz, Austria. They have published articles on science fiction, weird fiction, and superhero comics in Alluvium and on Infinite Earths as well as short stories in The Big Click, Visionarium, Wyrd Daze, and Open Polyversity. Their first published novelettino is Dun da de Sewolawen: The Heart of Silence. They blog at phoenixdreaming.wordpress.com.
No comments yet. Be the first!