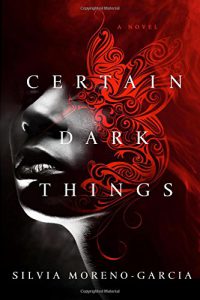 Within the pages of Certain Dark Things, Silvia Moreno-Garcia breathes some much-needed life into the stagnating vampire genre. Filled with expansive worldbuilding, gritty action scenes that wouldn't be out of place in a film, and characters that feel almost real enough to touch, the story that Moreno-Garcia crafts within the pages of her novel has almost everything that the vampire genre has been lacking over the years.

Not only does Moreno-Garcia push back hard against the idea of the "single white vampire" that has been an Urban Fantasy staple since day one, but her book also reimagines and reinterprets the very idea of what it means to be a vampire, from origin stories and abilities right down to the relationships vampires can have with humans. And it's all done against the backdrop of Mexico City politics and policing amidst gang violence taken to a new, supernatural level.

The majority of Certain Dark Things revolves around a garbage picker named Domingo and Atl, a vampire who chooses him as her next source of blood and a companion after they meet in the Mexico City subway. Both Atl and Domingo are young and, over the course of the novel, far removed from their earlier lives. There's something to be said about how Moreno-Garcia uses that removal, a seeming loss of innocence, to help develop both the characters and their motivations.

With Domingo, it's being drawn into Atl's life and finding out that vampires are nothing like the comics and movies. For Atl, the last in a line of Tlāhuihpochli (a Mexican subspecies of vampire that continues to uphold Aztec traditions), it's the loss of her family at the hands of enemy vampires and her new life on the run from them.

I think that, for me, the best part of the novel is how the relationship between Atl and Domingo evolves alongside this message about how needing people and being needed by people can change your outlook. Of course, I'm here for the bloodsuckers and the mythology that Moreno-Garcia unspools as she works her magic, but the things that had me on the edge of the seat almost all concerned developments in Atl and Domingo's relationship.

Out of the several vampire subspecies mentioned in Certain Dark Things, only Necros and Nachzehrers have sex with humans. Even then, all vampires view humans as pets, minions, or food sources, refusing to accept them as anything else or have relationships with them that don't border on parasitic.

As a result, many of Atl's initial views toward Domingo are fueled by that ideology and, as we see later in the book in a tense moment with a vampire with whom the duo has allied, the shift in Domingo and Atl's relationship is something that can and does cause conflict between her and other vampires who see the romantic relationship as akin to falling in love with the cow you're about to butcher for dinner.

At the start of the novel, Atl honestly isn't even sure that she wants to keep Domingo alive. After the first time that she feeds from him, she even gets mad at herself for not killing him because there's a risk that he'll lead to her death. She doesn't though, not because she has seen something in him worth keeping around, but because a) she's going to need clean blood to feed on and b) she has no idea how to properly dispose of a body.

As for Domingo—well, the kid has a healthy dose of teenaged adoration going on from the moment that he sees Atl and her Doberman Cualli in the subway. That only intensifies as he finds out what she is and becomes inextricably intertwined in her journey. At some parts early on, Domingo is definitely romanticizing the idea of Atl as a vampire and not really getting what that means.

Throughout Certain Dark Things, we see their relationship become more than vampire/food source, shifting from an awkward almost-friendship to a love so new and tender that it feels as though it could shatter at any point. At first, Atl keeps balking at the idea of how much she needs Domingo, more so than other vampires appear to need their own servants, but as the book goes on, she recognizes not only that there's nothing wrong with needing someone, but that Domingo is a good person to have at her side. Despite her instincts demanding (at multiple points) that she kill Domingo and consume his blood, she forces herself to stop and reevaluate the importance of his presence in her life. Simultaneously, we see Domingo readjusting his view of vampirism and that comes along with his growing relationship with Atl. Out of all the characters in Certain Dark Things, Domingo is my favorite one precisely because of how we can see him grow and change directly in response to what he has with Atl.

From the start, Atl is like a lamp to Domingo's moth. Because she's a beautiful vampire in a city where vampires have been banned for decades, she appeals to his fascination with vampires that comes largely from fiction. Of course Domingo is immediately caught up in her, first in a fanboy sense that isn't really seeing her—even after he becomes her tlapalēhuiāni or human servant—and then, as he comes to know her, he comes to love her. All of her.

From the very start of Certain Dark Things where we see Atl from Domingo's point of view, her heavy boots and the swinging bob of her black hair, Moreno-Garcia's language comes across with vivid imagery permeating the text. By the end of that introductory paragraph, I could actually close my eyes and picture Atl with Cualli nudging his big head against her leg as they stare Domingo down in that nearly empty subway car.

Just look at this description of Cualli and tell me that it's not super charming:

The animal looked mean and had a green bioluminescent tattoo running down the left side of its head, the kind of decoration that was all the rage among the hip and young urbanites. […] That she’d tattooed her dog struck him as cute, although perhaps it was expected: if you had a genetically modified dog you wanted people to notice it.

I love this segment for multiple reasons, but what continues to draw me back to it is how Domingo sees Cualli and thinks that Atl is cute because of him.

On top of fleshing out the best vampire/human servant relationship in the multiverse, Silvia Moreno-Garcia has gifted readers with the amazing work she put into developing the world of Certain Dark Things. It's everything I could have ever wanted from a vampire novel. I am the kind of reader that devours worldbuilding crumbs, grabbing at every single detail that builds the writer's world up in my head until I can easily imagine city streets and subway tunnels sprawling out around me.

Throughout the story there are also so many of these little pieces of the puzzle that makes up this alternate world where vampires have always existed. Put together, we get a world where a character is likely to be as well-versed on what pop stars are currently topping the charts as they are the state of vampire gangs and clans outside of Mexico City. We get a world where the vampire population is occasionally at war with humanity or forced to live on the outskirts of it or else they can be dragged away by sanitation workers. Moreno-Garcia does all of this extensive worldbuilding while rejecting the typical Urban Fantasy image of the vampire as a white European guy, an image that's easily one of my biggest issues with the subgenre.

In her blog post "Build A Vampire," the author talks about how she came up with Atl and the idea of making a realistic vampire that meshes with Mexican mythology while also looking at legendary bloodsuckers from across the world. It's a must-read if you want to get a better feel for some of the ways Atl is far from most of the vampires that we see in fiction. The mythologies that she references in her bloodsuckers—from the glow in the dark Obayifo that hails from West Africa to the reclusive Revenants—stretch across countries and centuries and end in twelve different subspecies of vampire. The vampires that we see on the page all contrast one another. As a Tlāhuihpochli, Atl is nothing like Nick Godoy, a perpetually hungry (and petulant) Necros responsible for the predicament she's in as well as the deaths of her family members. Neither vampire can hold a candle to Bernadino, a Revenant who, like the rest of his kind, strikes fear in the hearts of other vampires and humans alike due to the fact that he can feed on just about anyone.

It's all just really fascinating and fantastic, the way that the vampires we see in Certain Dark Things seemingly represent different aspects of the vampire that readers know from other works.

I'm going to be real here, Silvia Moreno-Garcia's Certain Dark Things is the book I wish had been my introduction to vampires in literature back when I was a kid. As it stands, I've already started trying to figure out which of the teenagers in my family would appreciate this book so that I can buy a bunch of copies for birthdays.

Like Loading...
© Copyright 2016 Zina Hutton
About Zina Hutton
Back when she was a child, Zina Hutton jumped out of a window to escape dance class in the Virgin Islands. Now she tends to leap headfirst into new stories and worlds as inspiration strikes. Zina currently works as a freelancer with publication credits in Fireside Fiction, The Mary Sue, Strange Horizons, ComicsAlliance, and Women Write About Comics. You can find her at Stitch's Media Mix and on Twitter as @stichomancery.
No comments yet. Be the first!