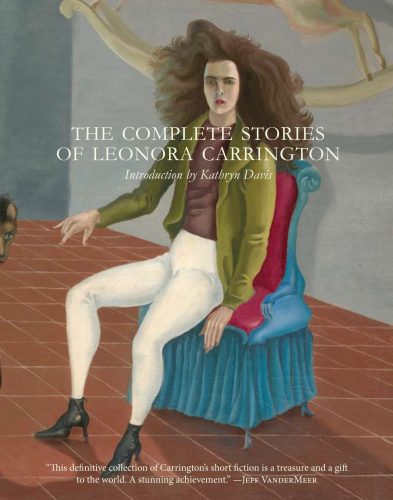 “What can’t be cured must be endured.”

So observes one narrator regarding a decomposing corpse’s bad breath in a recent anthology of surreal stories by the artist Leonora Carrington. One gets the sense that Carrington has composed her fantastic tales, each a mischievous mixture of comedic satire and the macabre, as a means of enduring the brutality and injustices of society. And she had much of that to endure in her life.

Carrington’s attraction to the surrealist movement led her to a professional partnership and passionate relationship with German artist Max Ernst—until the outbreak of World War II and Ernst’s arrest by first the French, and then the Gestapo. Carrington fled to Spain. These events helped contribute to anxiety, delusions, and other mental health deteriorations that led to her involuntary commitment to (imprisonment in) an asylum. Her eventual release into a nurse’s care led to her escape, and with the aid of a Mexican diplomat (who was friends with Picasso) she emigrated and eventually settled in Mexico. There, she continued her painting and writing, and became involved in women’s liberation movements, with feminist themes reaching ever more strongly into her work.

With the hundred-year anniversary of her birth in 1917, Dorothy: A Publishing Project released this edition of Carrington’s complete short stories, comprised of previously published collections The House of Fear (1972) and The Seventh Horse (1988), as well as three previously unpublished stories. Thirteen of these stories are translated from the French by Kathrine Talbot (six with the help of Marina Warner), and two are translated from the Spanish by Anthony Kerrigan. The majority of the stories were written between 1937 and 1941, with a handful composed later from the 1950s into the 1970s.

A glance at the table of contents alerts readers to much of what Carrington provides in her stories. The three titles that finish The Seventh Horse are a perfect example: “The Happy Corpse Story,” “How to Start a Pharmaceuticals Business,” “My Mother Is a Cow.” Here we see the grisly and comical next to the mundane, followed by the uncertainty of the surreal. All of these elements comingle in Carrington’s stories to juxtapose and blur opposites at every level of her composition, in a way that highlights the absurdities and hypocrisies of existence.

Carrington’s settings are built on surrealist foundations that by definition blurs fantasy and reality. But she also employs similar techniques in her themes, exploring the dichotomies of life/death, imprisonment/liberation, and consumption/creation. In this way, her stories are very reminiscent of fairy tales. They employ a similarly cold logic, a stoic presentation of brutally unjust conditions that a child can comprehend at their most basic level. They also often feature patriarchal guardian figures who are corrupted or weaker than the power they proclaim, ripe to be brought low. The major difference may be that Carrington’s stories rarely offer any moral or practical lessons, beyond modeling a simple acceptance of the unfair absurdities of life and humanity.

Carrington explores these themes with characters that also blur boundaries, usually in distinctions between human and nonhuman animals. She has a particular fascination with horses, perhaps symbolizing a kind of freedom, from connections to the leisure of play in a toy rocking horse to that frequent childhood desire to be able to own a real one despite the costs. Her nonhuman characters, they often display a deeper innocence and honesty that Carrington’s humans lack. Yet, all of her characters maintain a strong distance from the reader; there is no development to them. Carrington instead plays with the situations in which her characters are placed, meaning any readerly demands for character study here will be unmet.

This is not to say that the characters are simple or forgettable. They are brilliantly eccentric. There are those punished for flatulence in God’s house of worship, Soviet rats trained to operate on humans, intelligent cypress trees, talking horses, Aztec gods, witches birthing boars who mate with wildings, a woman stripping to the bones, violent vegetables, vampires, and a hyena ready to rip off a servant’s face and wear it to a ball. While absurd, all these figures are used to convey realities of existence, above all life’s violence and suffering. While whipping vegetables, one character explains that they “have to suffer for the sake of society.” Another character is told, “One’s got to suffer to go to Heaven. Those who do not wear corsets will never get there.”

Carrington conveys the macabre mood of her stories with an irrepressible style that appears simple on first sight, but carries layers of complexity beneath. She often writes in short sentences and exchanges that appear like ferocious fragments of insight or wit. Even when the possible meaning(s) behind a story on the whole stays ambiguous, individual lines ring with clear symbolism or relevance. Her language appears indirect and understated at one moment, but suddenly jarring with intensity the next. This style is developed already in “The Debutante,” one of Carrington’s earliest stories, in which a young girl plots with her hyena friend a way to avoid going to a ball by having the hyena dressing up as her and going in her place:

We were so busy that my mother almost opened the door to say good morning before the hyena had hidden under my bed.

"There's a bad smell in your room," my mother said, opening the window. "You must have a scented bath before tonight, with my new bath salts."

She didn't stay long. I think the smell was too much for her.

"Don't be late for breakfast," she said and left the room. The greatest difficulty was to find a way of disguising the hyena's face. We spent hours and hours looking for a way, but she always rejected my suggestions. At last she said, "I think I've found the answer. Have you got a maid?"

"There you are then. Ring for your maid, and when she comes in we'll pounce upon her and tear off her face. I'll wear her face tonight instead of mine."

"It's not practical," I said. "She'll probably die if she hasn't got a face. Somebody will certainly find the corpse, and we'll be put in prison."

"I'm hungry enough to eat her," the hyena replied.

"Only if you promise to kill her before tearing off her face. It'll hurt too much otherwise."

The nature of these surreal stories makes them into something that may not appeal to readers who dislike the darkly bizarre or enigmatic—stories that close out, dream-like, with no precise resolution. Many may find that her writing works most effectively in small doses, its repetitive symbols and insights feeling too familiar through an extended binge. For example, the previously unpublished story “Jemima and the Wolf,” which ends the book, lost many merits for me due to this fatigue. It’s a longer tale that allows for greater development and “plot” complexity than Carrington’s other stories, and it might benefit from a reading with more space from the experience of the rest of the collection.

Ultimately, Leonora Carrington’s stories are artistic, equivalent to her paintings but rendered instead with words. I have a vague sort of attraction to the mood of her paintings, but pictures have never conveyed to me the complex details that words have. One character is described as having “the golden skin like the corpse of a child preserved in an old and excellent liqueur.” A servant is called “a bloated young man who looked like a plump hen cooked in aromatic stock.” A picture in my opinion is not worth a thousand words; this type of writing is far more valuable and evocative. In this way, Carrington’s writing significantly enhances my appreciation for her visual art. It brings to life the surreal imagery she uses to the point of excess to convey visceral emotions of joy, yearning, and anger. Indeed, her own personal history, both before and after her imprisonment in an asylum, may give Carrington particular strengths in effectively depicting disturbed mental landscapes that reflect the underlying reality of society with such precisions.

Readers interested in sampling some of her work can find two of the first few stories in this collection, “The Debutante” and “The Royal Summons,” available to read for free online from  Vice. These two stories rank as two of my favorites, and they introduce a reader to many of the most common themes and symbols of Carrington’s writing: animals (particularly horses), harshly blunt honesty, and the messy, saliva-and-blood-filled acts of consuming life. They will give you a good sense of whether you’d like to explore her fabulously surreal worlds further.

Like Loading...
© Copyright 2019 By: Daniel Haeusser
About Daniel Haeusser
Daniel Haeusser is an assistant professor in the Department of Biology at Canisius College in Buffalo. Daniel publishes book reviews on Reading 1000 Lives. He also writes for the American Society for Microbiology blog Small Things Considered, contributes book reviews to The Skiffy and Fanty Show and Atticus Review, and can be found on Facebook, Twitter, or Goodreads.
No comments yet. Be the first!