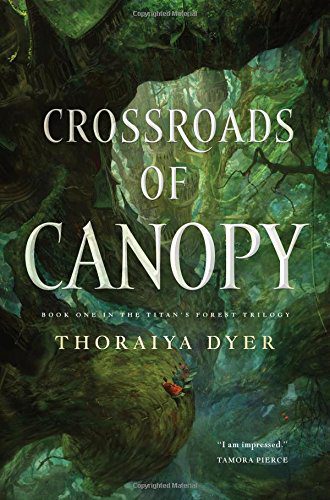 Crossroads of Canopy, Thoraiya Dyer’s debut novel, focusses on a young girl, Unar, as she navigates her way through the perilous, tree-top society of Canopy. Born in poverty, Unar runs away after overhearing her mother’s plans to sell her into slavery, and soon finds refuge in the Garden of the fertility goddess Audblayin, one of twelve Canopian deities routinely incarnated into human bodies, called avatars, who each protect the residents of a given niche. It’s here that Unar develops the belief that she’s destined to be the bodyguard of Audblayin’s next avatar: her magic is strong, but her stubborn self-conviction frequently sets her at odds with the other Gardeners. Unar believes she is special; that the rules don’t apply to her. But while it’s a mixture of ego, ambition, and impatience that initially leads her to flout the rules of the Garden, her independence also leads her into friendship with Ylly, one of the Garden’s slaves. Born in Understory, the feared home of raiders, heathens, and exiles, and captured by those in Canopy, Ylly opens Unar’s eyes to the injustices of her world. But when Audblayin’s avatar dies, nothing goes as Unar predicts: instead of being named a bodyguard, she finds herself cast down and ultimately stranded in Understory, where she learns of a plot against Canopian rule. The more Unar learns of Understory, the more questions she has. Who were the Old Gods? How were they killed? And why is Canopian magic tied to their gods and goddesses, while the magic of Understorians is not?

A few years ago, there was a sudden uptick in antipodean SFF authors writing about societies based around giant trees and forests. There’s Kaaron Warren’s Walking the Tree, Mary Victoria’s Chronicles of the Tree trilogy, K.S. Nikakis’s Kira Chronicles, and now there’s Dyer’s Crossroads of Canopy, the first in the Titan’s Forest trilogy. Whatever the reason for the trend, it’s one I wholeheartedly approve: as an SFF-loving teen, I always felt a confused sort of dissonance at the difference between the Eurocentric environments I read about and the ones in which I lived, and I doubt I was the only Australian reader to feel that way. Though giant trees and forests aren’t unique to antipodean literature—the Wroshyr trees of Kashyyyk in the Star Wars EU and the Iifa Tree in Final Fantasy IX are two prominent examples from the wider genre—they strike me as carrying a particular contextual weight, here.

Modern Australia was founded in the long, expectant shadow of European cultural norms: though multiple Aboriginal peoples once lived in what is now called the Nullarbor Plain (a name which literally means “no trees”), to the white settlers, it was an inhospitable wasteland. Neither our coastal bushlands nor our patches of tropical rainforest bear any resemblance to the woodlands of Britain or the forests of Europe, and as such, they’re environments that seldom if ever appear in secondary worlds in western SFF traditions. As uniquely beautiful as New Zealand is, at least certain of its mountains and greenery are fantasy-familiar enough to global eyes to pass as Middle-earth, but in cinematic SFFnal tradition, Australian landscapes are used for more alien effect: red Martian dust in the outback, prehistoric vistas in the Katherine Gorge, and the desolate, dystopian wastelands of the original Mad Max trilogy.

Which is why, to a reader like myself, Crossroads of Canopy is at once both familiar and unfamiliar, thrilling in its exploration of a treetop setting based on the Australian rainforest. Mixed in with names and terms of Dyer’s own invention are waratahs, casuarinas, and floodgums, evoking a specific sense of place. Rather than treating the arboreal setting as a novelty, Dyer instead invests it in the worldbuilding to compelling effect. The striated differences between the people of Canopy, Understory, and (the only hinted-at) Floor are more than just ornamental: as the story progresses, the importance of access to warmth and sunlight in social hierarchy become increasingly clear. Gardeners and other priests are greeted as “Warmed Ones,” a reference to the fact that the emergent trees in which their temples rest are closer to the sun; Understorians, by contrast, are comparatively pale, as the magical barrier that separates Canopy from Understory keeps them from experiencing much direct sunlight.

As beautiful and as magical as her setting can be, Dyer doesn’t flinch from telling a difficult story. From the beginning, it’s starkly clear that Unar lives in a society whose norms severely limit her options in life. Though her fervent belief in her destiny often makes her prickly, brash, and selfish, it’s also integral to her self-assurance, her willingness to ask questions, and her determination to act. At the same time, she’s also possessed of a strong streak of empathy, something that often clashes with her equally deep-seated pragmatism. Early on, we find Unar willing to break the rules of the Garden and descend into Understory in the hope of recovering a young child who fell from an upper branch. She does so in memory of her own baby sister, who likewise fell when Unar still lived with her parents, and it’s this act of kindness which ultimately serves as a catalyst for her involvement in wider events. Complexity of this sort is what makes Unar a truly fascinating—and highly original—protagonist. She might not always be sympathetic, but she’s never boring to read about.

Dyer writes with accomplished ease, her prose style evocative without being needlessly ornate. She has a knack for seeding subsequently relevant plot details without telegraphing her intent, disguising them as minutiae—so much so that it’s sometimes easy to wonder where the story is headed in the moment, for all that it makes sense later. As such, I suspect her writing style is one which might easily lead an impatient reader to throw up their hands in frustration at the lack of obvious structure; which is, in turn, precisely what I loved about the book. Every time a previously minor detail was revealed to have later significance, I felt my enjoyment of the story and my trust in the writer grow: it’s always a pleasure to be surprised, and the richness of the worldbuilding, even in its thematically darker moments, made the story a pleasant space to inhabit. In the same vein, I also appreciated Dyer’s ability to write diversely—there are plenty of women, POC and queer characters—without shying away from acknowledging the uglier aspects of her world. In this respect, she puts me strongly in mind of N.K. Jemisin and Kameron Hurley: all three writers excel at using highly original settings to tell dark, complex stories about personhood, class, and culture.

Thematically, Crossroads of Canopy is a story about choices: personally, culturally, and politically. Over and over again, Unar’s efforts to choose what’s right for herself, both morally and in terms of her desires, put her at odds with the rules of Canopy. Her faith in her destiny has the paradoxical effect of allowing her to subvert the very system she wants to embody: the rules exist, yes, but they don’t fully apply to her, which means that, where she finds them unjust or feels thwarted by their implementation, she feels no compunction in breaking them, provided her ultimate goal—becoming Audblayin’s bodyguard—remains the same.

Little by little, Unar’s unique mix of compassion and exceptionalism sets her on the path to revolution, though she often fails to recognise the long-term consequences of her choices. It’s only when she encounters Frog, an angry Understorian girl involved in a frightening resistance movement, that she’s forced to confront the contradictions in her beliefs—and yet, she’s not alone in failing to always see clearly. In a telling scene, Frog castigates Unar for not having realised the inherent barbarity of Canopian society on her own, without help: one of their other allies is a former prince of Canopy, Frog says, and he saw it was wrong all by himself, which means that Unar has no excuse. But the prince, by virtue of his station, has had the luxury of rank to buoy him—time and space in which to observe and contemplate his society. Though Unar’s place in the Garden is comparatively privileged, it is also highly conditional on her adherence to its norms. Bending the rules too far is what ultimately sees Unar cast from Canopy, at which point, her immediate priority is survival. Though Unar doesn’t spontaneously recognise the failings of her world, it’s her compassion for others and her desire for knowledge that steadily lead her to the truth. That she performs a series of mental contortions along the way, attempting to reconcile her upbringing with her actions, is less to her discredit than it is achingly, powerfully human.

All in all, Crossroads of Canopy is an incredibly accomplished debut, and one I thoroughly recommend. I look forward to reading the rest of the trilogy, and hope that international readers will appreciate the Australian elements rather than balking at them.

Like Loading...
© Copyright 2017 By: Foz Meadows
About
About Foz Meadows
Foz Meadows is a genderqueer author, blogger, reviewer, poet, three-time Hugo nominee for Best Fan Writer, and winner of the Norma K Hemming Award. Her most recent novels, An Accident of Stars and A Tyranny of Queens, are available from Angry Robot Books. Though Australian, she currently lives in California.
No comments yet. Be the first!