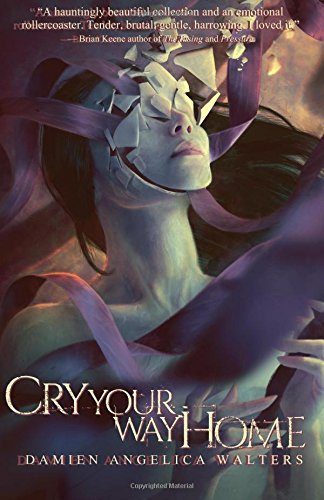 Damien Angelica Walters’s second short story collection, Cry Your Way Home follows 2015’s Sing Me Your Scars, also from Apex, and brings together another cast of strong women in unusual circumstances, fighting to be true to themselves and to understand themselves, regardless of what Legend, Story, or History tell them (and us) they should be.

A number of these stories—including “The Serial Killer’s Astronaut Daughter” (in which an astronaut in orbit is blindsided by news that her estranged birth father is a recently caught serial killer), “Tooth, Tongue & Claw” (about what happens after a daughter is ritually sacrificed to a local monster), and “Sugar and Spice and Everything Nice” (which combines Mean Girls with The Usual Suspects in an original and witty way)—trade on explicating and then subverting the expectations we have of women and of girls. These stories and others delve into society’s expectations of women: how they behave under stress, how they adapt or fail to adapt to new information and circumstances. Spoiler alert: Walters’s protagonists rarely comply with what society thinks they should do.

The best stories in the collection make the reader work to unpack, and then see past, the metaphorical/allegorical structure to the everyday truths which, as painful as they may be, underpin the stories. The language in “Not My Circus, Not My Monkeys: The Elephant’s Story” is nostalgic and lyrical, detailed yet ephemeral. The characters are presented as circus archetypes (ringmaster, acrobat, etc.), the narrator the titular elephant—but who are they, really? By using circus imagery and titles rather than “real” names, Walters elevates a tale of domestic neglect and attrition into the mythological. This is one of those little masterpieces that sticks with you, that you find yourself revisiting to see if there’s another strand of imagery to tease out and analyze. A similar thing happens in “The Judas Child,” where the author ruminates on what happens when, rather than being rescued (like Red Riding Hood) or rescuing themselves (like Hansel and Gretel), the child in a fairy tale decides the only way to survive is to become complicit in the monster’s horrible acts. What toll does this “Stockholm Syndrome” take on a young psyche? As with the characters of “Not My Circus,” I am still not convinced the monster in “The Judas Child” is a literal monster, even after several rereads. In a similar vein, “The Floating Girls: A Documentary” never quite concretely answers the question of whether the “floating girls” of the title were a real phenomenon or a sort of mass-hysteria event to explain disappearances due to kidnapping or suicide, but the haunting imagery Walters uses to describe them lingers with the reader long after the story is finished.

Several of the stories in this collection touch on intense personal issues, and may be difficult for some readers to experience. “Falling Under, Through the Dark” and “Umbilicus” both have the sudden and unexpected loss of a child by drowning as a key plot point, while the title story “Little Girl Blue, Come Cry Your Way Home” is an intimate look at postpartum depression and coping with the stress of a child who won’t stop crying. “Take a Walk In The Night, My Love” is a noir-ish tale that only starts out sounding like a case of early-onset Alzheimer’s before it takes the twists it does; companion piece “In the Spaces Where You Once Lived” is a brutally honest full-on exploration of an overburdened spouse dealing with the slow loss of her husband’s personality even while his body remains, seemingly inhabited by a stranger. If you can make it through the story, “In the Spaces Where You Once Lived” is also possibly the most cathartic story in the collection in terms of the emotional payoff and release. Equally brutal, but without the catharsis, is “On the Other Side of the Door, Everything Changes,” one of three stories that deal with communication disconnects between mothers and teen daughters. Even with amazing emotional detail on both sides of the age gap, the story ultimately hangs on the Schrödinger moment of a door unopened. (The other two stories regarding mother-daughter miscommunication are “The Hands That Hold, the Lies That Bind,” in which family secrets create a thorny situation for the teen narrator, and “Deep Within the Marrow, Hidden in My Smile,” about the fissures that never quite heal in blended families.)

Walters’s signature style is the story composed of short vignettes. Even when the action in one vignette follows closely after the scene preceding, symbols are used to separate the pieces, giving the reader a moment, whether they realize they’re doing it or not, to pause and breathe before the next small chunk of the story arrives. These little vignettes are like snowflakes: individually intricate in their wording, captivating in the way they flow and move, but gaining true power when they accumulate. Many of Walters’s stories are like mini-snowstorms: they start out like a light dusting and end by blowing us away. “This Is the Way I Die” is a particularly good example of how Walters is a master of this style. It starts with a simple, recognizable “I Want” statement (“I want to be broken, to be shattered then reshaped …”); each subsequent scene, a paragraph or two in length at most, adds a new detail to the narrator’s quest and details about the person helping her. The end, when it hits, carries the weight of a blizzard. In “S Is for Soliloquy,” Walters melds first-person and second-person narration with a speculative fiction aspect so subtle it might almost be window-dressing to illustrate what it takes to move past, if not outright erase, a failed relationship. The narrator visits places where the couple created memories together, to try and reclaim them for herself. (The story works wonderfully as a companion piece to ‘Nathan Burgoine and Angela Stone’s recent novella “Saving the Date,” which is not speculative fiction at all but treads similar territory regarding creating new memories to replace older traumatic hurts. Read the stories back to back and see if you don’t agree.)

The author is also not afraid to retell fairy tales with a more modern sensibility or undercurrent. “A Lie You Give, and Thus I Take” intersperses aspects of several classics (from a gingerbread house to dwarves to fairy godmothers to slowly expanding cracks in the walls of reality) in a second-person narration that asks the reader to question why fairy tale characters, male and female, all bleed together after a while and how stories overlap even when we think we’re the focal point of something new and unique.

These seventeen stories fall mostly into the horror and dark fantasy genres, whether they are Lovecraftian or psychological or somewhere in between. There are only a few (like “The Serial Killer’s Astronaut Daughter”) that have a veneer of science fiction over the horror aspects, and this is not surprising given the author’s stated love for the movie Alien. They were also all published between 2014 and 2016, and don’t represent Walters’s full output in those three years. I hope another collection, as strong and engrossing as Cry Your Way Home and Sing Me Your Scars, is forthcoming sooner rather than later.

Like Loading...
© Copyright 2018 By: Anthony Cardno
About Anthony Cardno
Anthony R. Cardno's reviews have also appeared in Icarus and Chelsea Station. His short fiction can be found in Beyond the Sun (Fairwood Press) and Oomph (Crossed Genres). He interviews creative types at www.anthonycardno.com and can be found on Twitter as @talekyn.
No comments yet. Be the first!