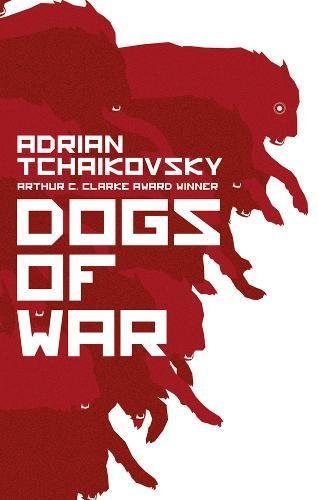 Adrian Tchaikovsky’s Dogs of War is an action-packed science fiction novel featuring genetically engineered creatures bred for war. The days of Doctor Moreau’s pure research are long past, and a new scientist, Murray, has found a commercial use for the advances in vivisection and bioengineering. Rex is an armed and bulletproof bioform engineered to be a good dog, and follow Master’s commands. Indeed, Rex and his multiform assault unit—Dragon, Honey and Bees—have been at the forefront of a dirty war in Campeche, south-eastern Mexico; he has indiscriminately killed men, women and children because Murray said that they were “enemies.” Rex couldn’t decide for himself, or sever his feedback implants and override encoded hierarchies. When the world uncovers the heinous details of the genocide, Murray is tried as a war criminal. Now the International Court of Justice has to decide whether Rex is a dangerous weapon to be decommissioned, or a living being with the right to life and liberty. And perhaps more.

“I was leader.” It spoke carefully, stressing the words strangely. “My squad was Honey, Dragon and Bees, but I was leader.”

Back to the notes. Murray only had the one Multiform pack, and the names of the rest checked out. Some clerk had mixed up the records, Aslan guessed. After all, nobody would have thought it was very important.

Looking into that brutal, bestial face, his heart sank, because how could this thing ever be seen as anything other than a threat? They’re going to exterminate them, Aslan knew then. From concentration camps to gas chambers. And the courts that were made to punish genocide are going to be making it happen. (p. 162)

Courtroom drama plays a critical role in Dogs of War. The novel is as much about the legal imperative to define and create laws that would ultimately govern artificial intelligences and lifeforms as it is the ethics of creating them in the first place. The author’s one-line bio on the book’s jacket doesn’t give much information about his legal background that seem relevant to the themes and characters of the novel, but according to Wikipedia, Tchaikovsky studied zoology and psychology, and now works as a legal executive in England. Dogs of War could be read as a long legal argument in favor of his non-human subjects—bioforms, insects, animals.

Tchaikovsky’s Arthur C. Clarke Award-winning novel Children of Time (2017) charted the rise of a space-faring ant-and-spider civilization, and imagined a non-anthropocene world order aided by human- and AI-engineered genetic code. The male spiders’ struggle for survival and gender equality was captured beautifully in this thought-provoking  space opera. In the female-dominated culture of Children of Time, a male spider can be killed and devoured without impunity or deliberation. It takes countless generations of brave geniuses and existential threats to create the right environment in which the males can begin to be seen as useful, if not equal. Dogs of War bears a familiar ambition—the reader witnesses and experiences the transformation of intelligent machines, the bioforms, into beings capable of humanity and compassion. Through changing lenses and shifting points of view, the novel takes us from the improbably far future of Children of Time to a future that’s already in the making here on earth.

In Dogs of War, Tchaikovsky lays the ground for a future where humans could extend to their creations the same rights as they enjoy themselves, either of their own accord—or through the hidden hand of an artificial intelligence  in charge of our essential institutions, industries and infrastructures. In either case, humanity faces competition. Biorobotics, bionics or synthetic biology are nascent industries in our own world that will probably supply a bulk of our workforce in the near future. There is no way to tell how genetic engineering will reshape or retool all living things on earth. It’s easy to imagine a world, however, in which the sentient android Maria Hellene from Dogs of War may not have to hide her true identity and pretend to be human after all: in 2017, Sofia the humanoid robot was given citizenship status by Saudi Arabia. However, Saudi Arabia’s record of human rights violations makes one wonder if citizenship is a guarantee of a life of freedom, or just another instrument of enslavement in the hands of the Master .

Tchaikovsky also examines his theme from the opposite perspective. What if Doctor Moreau’s creatures escaped the island? Can we live in harmony with Murray’s monsters? Is it right or ethical to play god and create synthetic lifeforms in the first place?

Poor brutes! I began to see the viler aspect of Moreau’s cruelty. I had not thought before of the pain and trouble that came to these poor victims after they had passed from Moreau’s hands. I had shivered only at the days of actual torment in the enclosure. But now that seemed to me the lesser part. Before, they had been beasts, their instincts fitly adapted to their surroundings, and happy as living things may be. Now they stumbled in the shackles of humanity, lived in a fear that never died, fretted by a law they could not understand; their mock-human existence, begun in an agony, was one long internal struggle, one long dread of Moreau—and for what? It was the wantonness of it that stirred me. (p. 145) (The Island of Doctor Moreau, Broadview Press, 2009)

H.G. Wells’s protagonist Edward Prendick in The Island of Doctor Moreau (1896) is more articulate and self-aware than Rex, a creature he would have easily recognized as the product of human hubris (or genius). But Tchaikovsky’s Rex is neither a humanoid-gentleman dog like Michael Swanwick’s Surplus (“The Dog Said Bow-Wow” (2001)), or the menacing robot dog of “Metalhead” (Black Mirror (2017)). If you found the plot and characters of “Metalhead” disturbing and unsatisfying, you should read Dogs of War. It’s exciting to be able to get inside the head of an animal—a powerful and grotesque monster—who is more intelligent and compassionate than the seemingly mindless machine we encountered in Black Mirror.

Rex is a soldier. He is the loyal Dog-Man with an expensive designer body that is his armor and also his prison. But he doesn’t understand himself or others enough to make informed decisions, or develop a worldview or opinions of his own. He doesn’t want to think—he wants Master and Honey to do the thinking for him. Thinking is hard work, and one can easily make mistakes which Rex can’t afford to make—Master doesn’t like Bad Dog. Rex is happy when his feedback implants tell him he is a Good Dog, when Master tells him “Good Dog.” He doesn’t want to be a leader, either—it involves making choices, and it’s difficult when the lives of his kind are at stake, when one bad decision or choice could take away their rights and freedom. In other words, Rex doesn’t want to question the law, or fight for himself or his kind, until he becomes truly human through years of trials and errors, sentience-information-experience leading to emotional intelligence. The fundamental nature of the dog is good, not evil—and perhaps it’s this underlying belief that makes most characters in the book equally good and likeable, especially Honey, the super-intelligent bear who wants to be a college professor. For a novel about bloody war and action, there is also a lot of laughter and love in this book.

It’s rare to come across a book that leaves no room for complaint. Dogs of War raises all the pertinent questions of our time, and its science fiction is entirely plausible. Will Rex, Honey, or Maria be free in a world where humans are afraid of enhanced intelligent machines that could take away their homes and jobs? Is the world of tomorrow going to be a world of abundance or are we going to continue to manufacture scarcity by limiting resources in order to control people? Sadly, the world of Dogs of War doesn’t seem much different from the one we inhabit today. The novel offers a critical view of a view of the world that science fiction can often seem to perpetuate —Tchaikovsky contends that technology in itself cannot be the final answer to our human flaws. Discrimination and segregation is probably going to be a reality for Maria and her kind as much as it is for the world’s poor, marginalized, minority populations.

Dogs of War is ultimately a story of hope; Tchaikovsky knows that human laws and societies are malleable—they can be hacked—and change is possible. And he deserves praise for exploring the legal, ethical, and existential questions that will soon confront humanity regarding synthetic life and organic robots with a simplicity of prose and masterful insight. This breadth of vision coupled with the immediacy of its subject matter and its terrific menagerie of bioforms, certainly makes Dogs of War a highly topical and worthwhile, as well as entertaining, read. Highly recommended.

Like Loading...
© Copyright 2018 By: Salik Shah
About Salik Shah
Salik Shah is a writer and filmmaker. His work has been nominated for Toto Awards and Kumaon Literary Festival’s Fellows of Nature, and one of his short stories appears in a course syllabus at SOAS University of London. He is the founding editor of Mithila Review, with media appearances around the world.
No comments yet. Be the first!