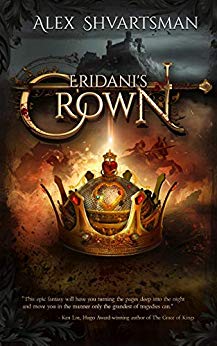 In the world of Eridani’s Crown, there are no handy crutches for the reader to rest on. From its earliest pages, Alex Shvartsman’s novel subverts many of the tropes of high fantasy. We still get prophecies, politics, warfare, magic, and fantastic creatures, but Shvartsman toys with our expectations at every turn. We follow the titular Eridani’s journey from somewhat coddled princess to Queen Mother of the world, and along the way we’re subject to treatises on how easily idealism is subverted, on how stories change depending on who is telling them—and on what the teller wants us to hear.

Early in the book—after she has killed her first man (in self-defense during a royal assassination attempt), but while she’s still fairly innocent and idealistic—Eridani encounters the Sorceress of Skond and hears the first of several prophecies about her life. She has a complex and ambiguous destiny and everyone except her brother Danchu will come to betray her. As presented, there’s none of the traditional craft associated with prophecies in fantasy novels: no investigation of animal innards or use of cards, no trance states or flashes of magic with glimpses of a greater unseen world. It’s a simple moment between two women, one of whom is believed to hold mystical power and the other of whom in the moment feels powerless. Nothing in the scene precludes or confirms the presence of the Sorceress’s “invisible deity,” from whom she claims the prophecy comes. Eridani doubts, the Sorceress certainly sounds like she believes, and the reader is left to decide whether the Sorceress has access to magical means of divination or is just a masterful manipulator. Eridani expects betrayal at every turn, but also hopes that the wording of the prophecy gives her more than one dependable out. Does the prophecy come true because people choose to betray Eridani, or do people betray Eridani because the prophecy is true? There’s also a very sly repeating undercurrent about what really constitutes a “betrayal” versus poor judgement. Shvartsman subverts the prophecy trope by never actually confirming whether the prophesier has any actual ability to see the future or is just playing odds based on local politics.

And what politics there are. The book opens with the opportunistic assassination of Eridani and Danchu’s parents (and the attempted … kidnapping? murder? … of the siblings), in a bold power-grab by a man with the title of Patriarch. Almost immediately, powerful nobles take sides, most arrayed against the siblings in favor of the entrenched Patriarch. There are secret meetings, offers, counter-offers, and of course the betrayal of promises from that moment on. At first, Eridani is a pawn; later she is the chess master. This through-line is almost a master class in how young, idealistic politicians are slowly chipped away at and lose that idealism. Some get caught up making small concessions to gain support, but those concessions become a trap from which the only way out is more concessions, more backsliding on promises to the people they vowed to represent. Some simply want power or fame or to craft a legacy regardless of the cost. But payment comes due for everyone eventually, and especially for someone who thoroughly loses touch with where they started.

In high fantasy, politics almost always leads to warfare, and this is especially so in the Grimdark sub-genre. There is no shortage of bloody battles throughout the book, from Eridani’s first swordfight through the solo battles that build her legend. But here again, Shvartsman plays with expectations: the bigger the battles get, the more removed from them Eridani becomes. There’s more bloodshed in the second half of the book than the first, but our main character no longer experiences it firsthand. Instead, Shvartsman introduces a tertiary-level character to keep readers informed about the toll Eridani’s destiny is taking on the average person. Here, the author cleverly inserts a bit of previously published flash fiction, “The 47 Dictums of Warfare,” as a chapter that brutally reveals the impact constant warfare has on the rank and file, and what place honorable behavior might have in such a world.

Amid this careful unspooling of consequence, it’s only about halfway through that we get any sense that magic might be real in this world. Shvartsman uses magic sparingly throughout the book, and it first appears through the presence of a giant bat-like creature which Eridani encounters. Even here and afterwards, the magic itself is mentioned but never becomes a focal point. Likewise, there’s a warlock in Eridani’s court and we see the toll magic takes on it as it becomes less human as the story unfolds, but we never learn why the magic has this effect on it. Eridani herself never wields magic (although she does take possession of what seems to be a legendary sword), while the Sorceress seems to employ magic in one of her later appearances but even that might be adept sleight of hand. Even in George R. R. Martin’s A Song of Ice and Fire, magic and fantastical creatures eventually came to the forefront of the narrative; here, they never really do. Another expectation turned sideways.

Another common characteristic of high fantasy is inordinate length. There’s a lot of landscape—both figurative and literal—to cover for Eridani’s story to be complete. In some hands, this story would have topped a thousand pages, and in others it would stretch across a multivolume series of novels of ever-increasing girth. Shvartsman gives it all to us in a lean 284 pages, leaping first months then years in Eridani’s life and letting light exposition fill in what we haven’t seen. Not every dress worn, sword wielded, battlement stormed needs to be detailed to understand the world in which Eridani lives and which she irrevocably alters. There’s not a wasted word in this book, and therefore every word is a signpost to one of the novel’s themes.

One of those themes is that power corrupts. It’s a cliché, with good reason, and here, too, Shvartsman undermines the trope: absolute power doesn’t necessarily corrupt absolutely. Eridani starts out idealistic; she draws people to her because she does the right thing, if not always for the right reasons. This is true only for so long in the novel, however, before we see Eridani starting to change her goals and her reasons for pursuing them. There is plenty of evidence that Eridani is pained by the decisions she makes, regrets the results of those decisions. Power corrupts, but it may not corrode.

The novel’s other major theme is that stories and facts can be manipulated to prove a point. Even if the Sorceress of Skond’s prophecy is a true telling and not just intentional vaguery, what she chooses to tell Eridani—and what she chooses to leave unspoken—affect how Eridani acts from that point forward. Had Eridani been given more detail about who exactly would betray her or how, for instance, she might have interpreted certain characters’ actions less as betrayal and more as honest mistakes. Similarly, and later in the novel, Eridani and her council encounter a subversive storyteller, a woman who uses language and colored smoke to relate the legend of Kalatar, a figure who once united much of the world under a single ruler. The storyteller manipulates the facts and even geography of Kalatar’s story to make a very specific point about the nature of conquest and rulership, much as modern movie and theater directors pick and choose which details of a famous person’s life to highlight in a biographical work (see the ongoing controversy over Lin-Manuel Miranda’s Hamilton, for instance). The same storyteller is later convinced to tell Eridani’s story in a way that presents her as beneficent ruler rather than brutal conqueror, despite much evidence to the contrary. To take it to a more meta level, Shvartsman himself leaves swathes of Eridani’s life out of the narrative and leaves unresolved the reality and strength of magic. I think what’s left out is intentional, to drive us to see Eridani in a certain light, and to take certain lessons from her story.

In the first half of the book, almost everything that happens to Eridani is out of her control: the death of her parents, the loss of key supporters. In the second half of the book, she reacts to that early lack of control by swinging too far in the other direction. Always afraid that what she has will be taken away from her, she loses sight of her youthful goals and becomes someone very different from the woman she thought she would grow into. Like the subversive Storyteller, Shvartsman uses only the moments of Eridani’s life that illustrate how change in a personality, or in a person’s goals and aspirations, happens so incrementally that we don’t see it in ourselves—or that if we do, we often see it too late.

Like Loading...
© Copyright 2020 By: Anthony Cardno
About Anthony Cardno
Anthony R. Cardno's reviews have also appeared in Icarus and Chelsea Station. His short fiction can be found in Beyond the Sun (Fairwood Press) and Oomph (Crossed Genres). He interviews creative types at www.anthonycardno.com and can be found on Twitter as @talekyn.
No comments yet. Be the first!