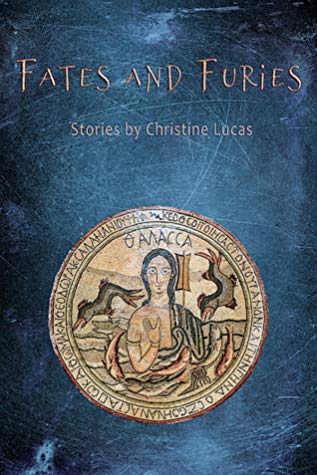 Fates and Furies by Christine Lucas is a fascinating, novella-length collection of interwoven short stories set in the mythic landscape of Hellenic Greece. Dryads and centaurs dance to flute music in the groves of Dodona; Amazons and their descendants people the landscape; Charon the ferryman drifts ghostly on the shore.

But it is also science fiction. The flute player is an alien child from another dimension; the grove holds a portal to another planet; the Greek philosopher is a cyborg reborn on the distant plains of Mars. The collection is published by Candlemark & Gleam’s Reckless Imprint which, as the publisher’s page explains, began as a way to capture those works of science fiction that fall between short stories and novels, that tricky area between twelve and forty-plus thousand words. These are works experienced writers are all too familiar with—the fully developed, intricate, often rich and playful story that is too long for most magazines and yet too short for traditional publishers, and thus nearly impossible to sell. This format allows for an emphasis on quality world-building that is often difficult in shorter works, The Reckless Imprint also seeks out “non-standard settings” and voices that might otherwise be ignored. We see all of this here, in Lucas’s Fates and Furies.

This story begins with Alexander the Great on his death bed. Callisthenes, as a ghost, follows Thessalonike on her quest to seek out the water of immortality in time to save the dying Alexander. Along the way, she fights Scorpion men and encounters a lamassu—an Assyrian deity with the body of a lion and the head of a man. But Thessalonike’s most dangerous enemy, and the fatal one, will be Olympias, Alexander’s powerful, magic mother. After Thessalonike fails to save her brother, Olympias tears Thessalonike to shreds, along with Callisthenes, and leaves them to become mythic in their own right.

The second story, “Ouroboros,” finds all three characters reborn as cyborgs on Mars: Callisthenes as a drone named Kallie, Thessalonike as philosopher/poet, and Alexander as an Enforcer. Kallie, near the end of her useful life, strikes out again on a quest, this time to find out why she has been born here on this planet, a question she thinks Thessalonike can answer. Instead, Kallie herself ends up answering it, after a fashion, for Alex the Enforcer.

Both of these stories work mainly because of Lucas’s powerful and poetic language, her ability to use sensual imagery to create a solid sense of place for the reader, whether that place is a chimerical valley inhabited by Scorpion Men or the high windy plains of Mars. They’re both good; but the strongest stories in the collection are those that follow.

The “Lady of the Crossroads,” for instance, which is set in Samothrace in 961 AD, is an eerie and wonderful reimagining of the “King Must Die” myth. Here, the dowager Irene, an ancient, blind queen mother who wants only to sit in the sun with her cat and live out her remaining years, comes to realize that the young women and young men of her island need her blood sacrifice. Her maid Merope takes Irene down to the three-pronged crossroads, where she follows the spirit road after the Mother Goddess to an ancient temple:

… they find the hidden path leading deeper into the woods of Mount Saos and a small chapel carved into the mountain rock … Every now and then a bird chirps, but otherwise nothing disturbs the stillness of this place. The air hangs heavy and warm around them, thick with whiffs of wild oregano and lemon balm. Whispers linger at the edge of hearing, speaking in a tongue familiar but long forgotten.

Merope lights their lantern. Once inside, into the heart of the rock, Irene feels at home. Like any Christian church, it is divided into two rooms, one larger for the worshipers and one smaller for the priest. But it’s not a Christian church—it never was. The Virgin’s face has the likeness of most church drawings: solemn, ascetic, a straight nose and almond-shaped eyes. A dark kerchief over brown hair, a widow’s black garments. In her delicate, long-fingered right hand she holds a baby. Her left, blackened and claw-like, holds a trident. From the waist down, she is immersed in a dark blue sea, with a scaly tail instead of legs. Boats gather around her, some intact, some sinking. Long before the Trinity, long before the Twelve, Another ruled this land and sea. She never left. (p. 52)

The half-mermaid, half-woman immortal is the same Goddess who accepted Thessalonike’s sacrifice; and this temple cave of hers runs through the rest of the book. She calls upon the queen, demanding and receiving her sacrifice; in exchange, she saves the people of Samothrace. What makes this story work, however, is how Lucas manages to capture the feel of the island, and of the island community: the smell of the air and the vegetation; the way everyone knows everyone’s family and story, back through the generations; how the tacit rules of that community run the world, and weave that world together, far more than any written rules. This is very sharply observed, and very good.

The best stories in the book are the last two, “A Thousand Waves from Home,” and “Leaping over Bonfires.” In the first of these, an old woman, Athena, her children long grown and gone, is visited by a strange wizened creature, starving and misshapen. We learn that this is an alien, a refugee from a dying world. At first Athena is wary of this creature, but later she befriends it, leaving it food and gifts; and later still she follows it—into the cave of the Mother Goddess.

It had been a long time since her last visit to those depths. Yannos was still alive then, and he stumbled upon the cavern while chasing a wayward goat. She knew the secret already. The women of these parts, those who walked alongside the goats, had always known such secrets, and whispered them on from mother to daughter, through lullabies and laments …

The creature’s footsteps resounded somewhere ahead, and Athena followed with her gaze downcast, as if to hide herself from the statues. Their silent gaze rekindled her shame. How could she have forgotten them, all those years? And what a failure she’d been, for not having born a daughter to keep their memory, once her own time came to go find her Yanno. (pp. 76-77)

Further into the cave than Athena has gone before, she finds a portal to the alien’s dying world, and meets the alien’s family, refugees left behind by their own people for the sin of being old or sick or deformed in some way: an Engineer, a Teacher, a Baby, a Poet, a Gardener. They welcome Athena to their refugee camp; they give her hospitality. In return, she takes them into her home.

Her guests didn’t burden her. When strangers neared, they huddled in the shed. Engineer made her a lot of trinkets, and she always had hot water, electricity didn’t get lost during the storms, and her TV showed channels from five different countries. Gardener did his tricks too and the tomatoes and zucchini in her garden grew twice their normal size. He sowed more from his own place, vegetables and flowers and weird-looking weeds, and they all found a home. Doctor brewed her broths and concocted her salves, and fixed Athena’s aches and high blood sugar. (p. 80)

And Baby—Baby grows into Lass, who becomes Athena’s adopted daughter, and is at the center of the next story, “Leaping over Bonfires.” As this story starts, Lass has grown into a young girl, one who is still otherworldly and fey. She is making flutes from bones—flutes whose music calls birds from the air and sets goats to dancing. Athena worries, though. Having an alien foster daughter is a risky proposition. She knows that if Lass draws too much attention, scholars and “men with guns” will come for her.

As it develops, this is what happens. Lass makes another flute, one which summons strange ethereal shadows—and the local priest, Papa-Elias, who brings with him “a man in a suit,” and a man with a gun. They arrive on a liminal day, the Summer Solstice:

… the day of St. John’s Feast on the Summer Solstice approached. In older times, bonfires would light up every square in every village, and girls with flowery wreaths would dance and jump over them, and toss little tokens to clay pitchers, so the saint would reveal to them the man they’d marry. And the nymphs and the dryads would peek from amidst the trees and chuckle and giggle at the thought of a Christian saint playing Cupid. (pp. 85-86)

The men attempt to take Lass prisoner; but she has her smallest flute, and sitting high in the oak tree (one grown from the sapling Athena’s great-great-grandmother brought from the Sacred Grove of Dodona) she plays it. Out of the woods dryads come dancing, along with all the other mythic beasts:

… satyrs and centaurs and maenads and creatures Athena had no name for, creatures that should not exist, not any more …

Atop the oak branch, Lass played tunes unheard on this land since a time long gone. And yet Athena found herself tapping her foot, snapping her fingers, nodding her head to follow along. How could she not? She’d heard the tune before: parts of it had survived in lullabies, in folk songs for weddings and funerals, battle songs, even Papa-Elias’ hymns. And when the dryads swarmed her and pulled her in their spiraling dance, she joined in. (p. 88)

The priest and the government men are pulled into the Bacchic dance as well, and wake the next day confused, their memory a blur. Athena sends them on their way before following the music back into the forest.

This last story, and that last paragraph, capture the strength of Lucas’s collection: the syncretic way it weaves together science fiction and myth, the ancient world and the modern world, the old stories and the new. This creates a depth and a richness that is very satisfying. Fates and Furies is a slender but wonderful collection with sharp writing and characterization that rewards rereading. Highly recommended.

Like Loading...
© Copyright 2020 By: Kelly Jennings
About Kelly Jennings
Kelly Jennings has published short fiction in Daily Science Fiction, The Sockdolager, and Strange Horizons; her first novel, Broken Slate, was released by Crossed Genres Press. Read more about her at her blog, delagar.
No comments yet. Be the first!