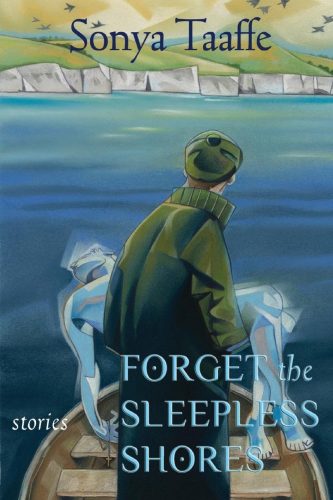 Full of natural and sensory detail that occasionally threatens to overwhelm the reader, Sonya Taaffe’s Lambda Literary Award-nominated collection Forget the Sleepless Shores: Stories is a compelling and thought-provoking read about human nature and our interaction with the natural world. Taaffe draws from multiple storytelling traditions, most notably Greek and Jewish, and layers stories within stories. Language—the use and misuse of it, the ways we are easily misunderstood no matter how detailed our speech may be—is at the center of most of these stories.

Even the shortest stories in the collection—“Teinds” explores courtship and personal history; “Imperator Noster” concerns an aquatic emperor ruling at a distance; “And Black Unfathomable Lakes” explicates the pain of watching a loved one become someone else; “Exorcisms” tracks the journey of spirit from the old world to the new; and “On Two Streets, with Three Languages” in which the author connects to formative Hebrew speculative fiction author An-sky—are so densely-written the reader gets lost in the worlds the author is creating. All four stories contain evocative phrases (“…blank-eyed as an effigy in a mouse’s nest of quilts” [“Teinds,” p. 2]; “His eyes were blacker than mussels, than onyx or opal or death in the eyes of drowned men” [“Imperator Noster,” p. 130]) that are somehow concrete and ephemeral at the same time.

The flash fiction entries are engrossing character studies, but Taaffe’s use of language is best displayed in the longer works collected in this volume. Each time I skim the collection, I find myself pausing to read just a paragraph or two of “The Salt House,” “The Creeping Influences,” “The Boatman’s Cure,” “All Our Salt-Bottled Hearts,” or “The Face of the Waters,” and before I know it I’ve reread the entire story and gleaned something I’d missed on previous reads. Sometimes what draws me back in is a particular phrase or a bit of dialogue. Often, it’s the natural imagery that permeates almost every story.

It’s no surprise, based on the collection’s title, that water imagery is front and center, but the author includes geologic imagery almost as often. In these tales, water represents change, impermanence, and movement towards or away from a character’s goals or destination, while geologic forces often represent permanence, steadfastness, an immobility. Interestingly, the author never reverses the tropes, never uses, say, an earthquake as an agent of change or stagnant pools of water as an image of permanence. I find myself wondering if that’s on purpose, but that’s something only Sonya Taaffe can tell us for sure.

Peat bogs, those potentially dangerous mixtures of land and water, are the setting for “The Creeping Influences,” in which an itinerant trans man is part of a crew who discover a long-dead and well-preserved woman’s body in the bog. The discovery threatens to reveal secrets—both the main character’s and those of the town the rest of the crew have grown up in, including a widow the main character is having an affair with. The bog serves as both geologic imagery (the permanence of bodies unable to decompose) and water imagery (forcing change upon the human characters), and the main character implies the bog is a metaphor for his own existence. This may be the story in the collection with the least obvious “speculative” aspect, aside from the main character having some possibly prescient dreams.

Water, or the personification of it, is one of the main characters in “The Face of the Waters.” A man leaving a bar, unhappy with city life, trips and almost drowns in a river—but the river itself saves him, and they have a conversation about why he was saved when others aren’t. Another aspect of the natural world, Autumn, is personified in “Chez Vous Soon.” Both stories focus on choices made to interfere, or not, in a loved one’s life. Combined with these interpretations of water and rock is a focus on families—of both the genetic and found types—which gives these stories much of the punch they pack.

In “The Salt House,” playwright Alex reconnects with the estranged daughter with whom his wife disappeared years earlier. The depths and shipwreck of their marriage are effectively told via flashback; Alex’s choice of script subject (Greek myths involving sea nymphs) connects neatly to his wife’s family history (various sea tragedies), but that’s not enough to keep her on land when the seas beckon.  The present-day scenes, set along the New England coast, are devastating in the distance that exists between a daughter and the father she barely remembers. Alex’s life, taken as a whole, is as tidal as the ocean near which he meets his daughter: constantly in flux but returning time and again to the same shore (his loss).

“The Salt House” also includes one of the most brilliant analyses of genetic versus surrogate fatherhood I have ever read:

“Madonna and child…I wonder if God was ever jealous.”

But he was already shaking his head, alight with apocrypha … “No, I mean God. He’s the one who gets all the credit, but Joseph has the family. And you can talk about your heavenly fathers all you want, but it’s still the worldly carpenter whose shoulder you puked up on when you were teething, he’s the man who saw you take your first steps, he’s your father in every way, except genetics, if there is such a thing as spiritual genetics, that counts. He shows you how to plane off wood shavings and not nick your fingers too badly. He’s decided to love you, even if he knows for certain you’re not his and he doesn’t quite believe his wife when she talks about angels. And God has to look down on that, because he doesn’t miss a sparrow’s fall, and the only thing he can give his son is a lonely death on the cross and a promise of the world’s redemption. There’s no bed-time stories in a cup of poison. No car keys to be handed down from behind the sky. … The things you miss out on, being incorporeal…”  (p. 147)

Family, and the difficulty of letting go, is also the focus of “The Boatman’s Cure.” Delia can see spirits, and in the right circumstances can release them from their earth-bound captivity. But to release one particular spirit, she needs the help of an ancient relic: an oar that Odysseus took with him to make peace with the god Poseidon. The story starts out as almost classic urban fantasy: our intrepid heroine at odds with an uncooperative ghost for possession of the needed relic (there’s even a brief, but bloody, fight scene). But the story quickly moves to a rumination on what keeps us tied to childhood homes, childhood injuries, and family faults. Again, water plays a key role: the marshes at the story’s start, references to the rivers Acheron and Styx of Greek myth, a character named “Anzolo de Canal.” There’s not much geologic imagery, but there’s absolutely a “descent into the underworld” moment and fire plays a key role. Family is also at the core of “All Our Salt-Bottled Hearts,” a Lovecraftian tale of genetics and what happens to those who are born different (in this case, the descendants of Innsmouth who aren’t blessed with the ability to live in the sea). These characters don’t get to experience water as the agent of change that is so familiar to their other family members, and are stuck in the trap that is their air-breathing land-dwelling, physically unchanging life. The main characters of “Hearts” aren’t directly related, but they find each other anyway —much as the characters in “On the Blindside” and “Another Coming”—and the story shows what you can do with the mythos without slavish impersonation of Lovecraft, Derleth, et al.

Forget the Sleepless Shores holds twenty-three stories for the reader to ponder regarding the mutability of the natural world, family, and romantic relationships. Of course, not every story will work for every reader. But if lush sensory detail and questions for which there are no simple answers are your thing, you won’t be disappointed in this collection.