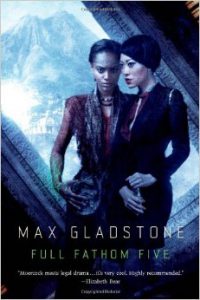 The third volume in Max Gladstone's ongoing Craft Sequence, Full Fathom Five is set sequentially after Three Parts Dead (2012) and Two Serpents Rise (2013); but despite featuring characters who've appeared in both previous volumes, it can nonetheless be read as a standalone story—as, indeed, can the other two books.

On the island of Kavenaka—a setting evocative of modern Hawaii, right down to the golfing tourists in loud floral shirts—Kai is a priest responsible for the building and maintenance of idols: custom-made repositories for the soulstuff of their clients in a world where faith is, quite literally, currency. But when her attempt to save a failing idol earns her rebuke instead of praise, she stubbornly sets about investigating why and, in the process, crosses paths with Izza, a street-smart urchin whose tales of make-believe gods might be more than they seem. Throw in Edmund Margot, a mainlander poet searching for his muse; Cat, a runaway priestess; and Teo, an entrepreneurial pilgrim with a secret agenda, and Kai's view of Kavekana will never be the same again.

Of Gladstone's first three novels, Full Fathom Five is far and away the strongest. Which isn't to say the previous volumes are weak (though I'll admit to having struggled with Two Serpents Rise)—it's just that the world of the Craft is so uniquely complex that, one suspects, even its creator needed a couple of novels to get the hang of it. Gladstone writes with a distinctive narrative flair that feels both emblematic of and appropriate to a setting where the trappings of the modern world—skyscrapers, business suits, coffee shops, offices, law firms—exist alongside deathless kings and ritual sacrifice, nightmare telegraphs and Craft magic. The seeming contradictions of this arrangement are part of the series' appeal: it's the poetry of Gladstone's writing that successfully marries the two, making it somewhat difficult to disentangle style from structure. Consider, for instance, this passage from page twenty-six, where Kai is called to account for her apparent role in the death of the idol:

Kai met the Craftswoman a week later in a nightmare of glass. She sat in a glass chair in front of a glass table and her fingers trailed over slick armrests without leaving a trace of oil or sweat. In one corner a glass fern stood in a glass pot, glass roots winding through glass soil. Other identical rooms stretched above, below, and to all sides, beyond transparent walls, ceiling, and floor, and in those rooms sat identical Kais and Craftswomen. As Kai crossed her legs beneath the table her infinite other selves crossed their legs, too, a susurrus of stockings breaking the silence of the dream.

In the distant waking world, she lay bandaged on a bed. Here, no injuries bound her except the ones she earned herself.

It's an extraordinary image, one of many such that appear through Gladstone's work. There's a conceptual density to these ideas that reminds me of China Miéville, and specifically of Perdido Street Station (2000), where half the point of the novel is the setting. Taking the concept further, Joss Whedon once described the titular spaceship of his cult show, Firefly, as being the “tenth character” of the series, and I'd argue that this particular idea—of location as character—is applicable to both Miéville and Gladstone's work. Which is why, returning to the point, it's so difficult—arguably impossible—to disentangle Gladstone's technical style from the substance of the story. The world of the Craft is built on fusion of myth and mathematics, allegory and alchemy, finance and faith, and as such, there's no way to understand or articulate the logic of the worldbuilding that doesn't, at least in part, depend on poetry.

Though Full Fathom Five can serve as a stand-alone novel, it's helpful to consider it in the context of the series. If Three Parts Dead had a flaw, it was a slight overabundance of plot at the expense of character history: we're given so much necessary information about the setting to help us understand the key mystery that Tara's backstory comes out feeling, by comparison, rushed and a little cramped. Nonetheless, it's an engaging, compelling, powerful first novel, and I love it fiercely. Two Serpents Rise, by contrast, seemed to have the opposite problem: an unnecessarily high percentage of freestanding, worldbuilding concepts crowding out the plot. This is, I suspect, largely because the central relationship dynamic between Caleb, son of a renegade priest, and Mal, the appropriately mysterious-and-beautiful woman he falls for, never really changes: we, like Caleb's friends and colleagues, spend the entire novel being rightfully suspicious of Mal, and as those suspicions are ultimately validated, it's easy to wonder why it took so long to get there, when nothing we learn ever really makes us trust her.

There was, meanwhile, some ferociously strong poetry in Two Serpents Rise, and a slew of fascinating images and concepts, but it's also the only book of the three (or of these three, rather—Gladstone has since written two more volumes, Last First Snow (2015) and Four Roads Cross (2016), both of which I’m yet to read) to stick more or less exclusively to a single protagonist, Caleb, which made me yearn for a stronger link between his personal arc and the worldbuilding. Which complaint, again, circles back to the issue of Mal's treachery: even though she's never really trustworthy, we're kept from seeing her POV until the very end, the better to present the confirmation as a reveal. Narratively, it was a sensible decision, but structurally, it's a weakness; from the outset, Caleb is almost claustrophobically obsessed with Mal, and not only is that a dynamic we've seen countless times before—the isolated everyman captivated by a powerful, inaccessible woman—but as the reader never quite shares his fascination, neither can we share his faith in her, which rather spoils the idea that her mystery is anything other than a trap.

But Full Fathom Five, having learned from these previous books, is the perfect balance of them both. Kavekana is an intriguing setting, and as the narrative switches between, primarily, Kai and Izza's perspectives—and as each character has a decidedly different relationship to the island—we end up learning the world and its contradictions in parallel to learning the characters. And they're original, compelling characters, too: Kai is, by Western reckoning, a trans woman, dedicated to her job and, despite spending most of the book recovering from injuries sustained in the first chapter, absolutely tenacious in hunting down the truth, while Izza is quick and complicated—a compelling, not-quite-childish mix of empathy and selfishness.

Interestingly, though Gladstone writes all his characters well, I can't quite shake the feeling that he writes women better than men. Or maybe it's just that, after so many years of exposure to male-dominated narratives, there's a base level of familiarity to straight male characters that their female counterparts, by dint of having gone so long unwritten, lack: though Gladstone writes them skilfully and in highly original contexts—and while I appreciate the diversity in his casts—I nonetheless feel as though I've seen Abelard, Caleb, Temoc, Jace, Claude, and Margot before, while Tara and Teo, Cat and Kai, Izza and Elayne, and even Mal are closer to being unknown quantities.

Full Fathom Five is a confident, complex, skilfully written book, and one that demonstrates Gladstone's rapid evolution as a writer. I've already heard good things about the fourth instalment in the Craft Sequence, Last First Snow—which, in a break of pattern, acts as a prequel volume to the other three—and am eager to read it. But whether you're looking for an entry point into the series or are eager to continue it, Full Fathom Five is bound to make for an excellent, satisfying read, and I strongly recommend it.

Like Loading...
© Copyright 2016 By: Foz Meadows
About
About Foz Meadows
Foz Meadows is a genderqueer author, blogger, reviewer, poet, three-time Hugo nominee for Best Fan Writer, and winner of the Norma K Hemming Award. Her most recent novels, An Accident of Stars and A Tyranny of Queens, are available from Angry Robot Books. Though Australian, she currently lives in California.
No comments yet. Be the first!