Reviews
Size / / /
Gods of Jade and Shadow by Silvia Moreno-Garcia
By: Electra Pritchett 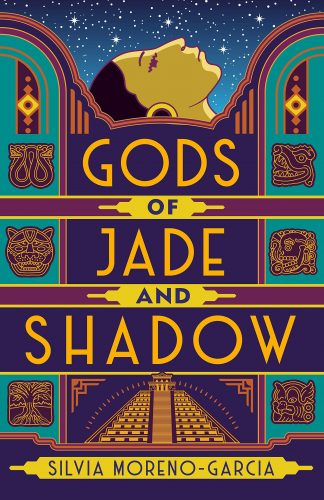 After her father’s death, Casiopea Tun and her mother are forced to move back under the roof of her overbearing grandfather, and she grows up a servant in her own family’s house, never really one of them by virtue of her grandfather’s disapproval of her parents’ marriage. Her father was too dark-skinned and too Mayan for her grandfather’s Eurocentric preferences, and Casiopea herself is too defiant, too dark, and too female to inherit the Leyva family fortune. Instead, it will all go to her spoiled cousin Martín, whose greatest humiliation—that their grandfather would rather Casiopea were a boy than have him inherit—is also the source of his hatred for, and habit of tormenting, his cousin.

Casiopea’s life in the tiny Yucatán town of Uukumil in 1927 bears a striking resemblance, then, to that of Cinderella. Gods of Jade and Shadow, however, is not a fairy tale, as its author Silvia Moreno-Garcia is at pains to remind us:

Had Casiopea possessed her father’s pronounced romantic leanings, perhaps she might have seen herself as a Cinderella-like figure. But although she treasured his old books, the skeletal remains of his collection—especially the sonnets by Quevedo, wells of sentiment for a young heart—she had decided it would be nonsense to configure herself into a tragic heroine. Instead, she chose to focus on more pragmatic issues […]. (p. 4)

For one thing, the figures Casiopea meets are of a bloodier vintage than the witches and enchanters of European fairy tales: the old ways of Mayan civilization are still strong in the peninsula of her birth, and after unlocking a peculiar chest in her grandfather’s bedroom, she finds herself bound via a shard of bone to the god of death, Hun-Kamé, whose younger twin brother, Vucub-Kamé, has deposed him from the throne of Xibalba, the underworld—and who seeks to return all of Mesoamerica to the past era of blood sacrifice that marked Mayan and Aztec civilization at their heights. Bound to Hun-Kamé, Casiopea accompanies him on a journey from the Yucatán to Veracruz to Mexico City, El Paso, and finally Baja, California. The journey is powered by Casiopea’s very real sacrifices: blood, hair, and possibly her life itself. Linked by the bone shard, death and his handmaiden are bound by a weird, parasitic relationship: Hun-Kamé draws vitality from Casiopea, killing her slowly, but as he does so, he slowly becomes more and more mortal, so that in the end he appears to be a young man only slightly older than Casiopea’s eighteen years.

As they travel, the pair wend their way through the Jazz Age in a modernizing, uncertain, post-revolutionary Mexico: far from God, close to the United States, defiantly liquored up as its northern neighbor stifles under Prohibition. For those unfamiliar with Mexico in the 1920s, Moreno-Garcia provides background in the form of sly narration. For example, when they arrive in Veracruz, the book informs us that:

Oh, there had been a carnival before, despite the mutterings of the Church. But it had been a sporadic, tumultuous affair, flaring up and cooling down. Its purpose and its organizers had been different. Now the carnival was modernized, molded by civic leaders who saw in it a chance to quietly insert useful post-revolutionary values into the community, amid all the glitter and dances. The newspapers said this was a festivity for “all social classes,” exalting the beauty of the women on display—models of Mexican femininity, filled with softness and quiet grace. A few years before prostitutes had been engaged in civil disobedience, protesting rental prices. Unions had been busy agitating workers, buzzing about bourgeoisie pigs. But Carnival smoothed out differences, brought people together, pleased the organizers. There was also, most importantly, money to be made. (pp. 72-73)

Casiopea acquires a flapper haircut, an up-to-the-minute wardrobe, and the ambition to learn to drive an automobile herself. Even as she and Hun-Kamé begin to cross the boundaries between mortal and divine, they cross the border between Mexico and the United States, between tradition and modernity, between the old mores of Uukumil and the new ways of Mexico’s metropolises, between the land of the living and the land of the dead. Along the way, both of them begin to experience the wider world directly for the first time in their existence, upending the binary of wisdom and ignorance that they seem to inhabit initially, and both begin to imagine a place for themselves in it. Along the way, Casiopea begins to lose her heart to the gradually more mortal Hun-Kamé, but she never quite loses her head.

The root of the god’s dispute with his brother turns out to lie in Hun-Kamé’s unwillingness to seek a return to Xibalba’s vanished glories, whereas Vucub-Kamé wants to bring the pre-Columbian past and its blood sacrifices into the modern present. Vucub-Kamé, for his part, is a cunning player, and he avails himself of his powers of prophecy, along with his willing supernatural and mortal allies, to counter Hun-Kamé in the game of fate. Mirroring Hun-Kamé and Casiopea, he suborns Casiopea’s cousin Martín as servant, hunter, and general dogsbody, an opposition that culminates in both mortals being sent to Xibalba to take part in a deceptively simple contest: walk the Black Road to the Jade Palace. Whoever arrives first wins the game, with the life and death of the twin death gods and the future of the world in the balance. Whoever steps off the road is lost, subject to k’up kaal, the defeat of beheading that constitutes a blood sacrifice to the gods, who are always, always hungry.

Gods of Jade and Shadow is not a fairy tale, though it unfolds like one, and it wears the trappings of that paradigm as a god might wear a cloak of feathers. But Cinderella is not the only archetype invoked in its pages: Casiopea herself is named for a constellation, a queen out of Greek mythology, and the legendary figures of Mayan mythology, the Hero Twins, are referenced just as frequently. Nor is this accidental: Gods of Jade and Shadow is a hero tale, and Casiopea herself is the protagonist. As the photographer Kate Imbach wrote by way of excoriating the impulse to pity Melania Trump, “in fairytales the women trapped in towers never save anyone but themselves.” Casiopea does not choose to save herself; she makes the hero’s choice, and chooses to save others. And as she tells Hun-Kamé when they first met, “You did not rescue me … I opened that chest. Besides, I wasn’t a princess in a tower. I knew I’d get away one way or another, and I was not waiting for a god to liberate me. That would have been both silly and unlikely” (p. 62).

As fantasy has finally become more inclusive and less Eurocentric over the past decade or so—a process that is by no means complete, finished, or evenly distributed, but which is very much happening—it has become possible to imagine books like this one as something more than lapidary one-offs. It may be too much to talk about Gods of Jade and Shadow and, say, Aliette de Bodard’s Servant of the Underworld trilogy as trailblazers of Mesoamerican fantasy, but they are certainly part of a larger upwelling of indigenous American themes and settings in the genre—Rebecca Roanhorse’s Sixth World series being another recent, excellent example. Although pre-Columbian mythology and magic and the Roaring Twenties may seem like a strange combination, in Moreno-Garcia’s hands they comprise an enchanting cocktail, just as Casiopea’s unsentimental view on her story is the perfect counterpart to its fantastic and at times hair-raising events. Raise a glass, and keep more like this coming.