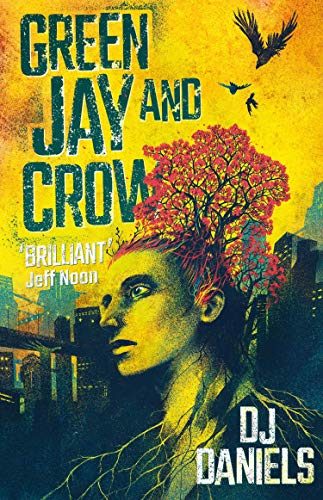 There’s a lot to like in DJ Daniels’s Green Jay and Crow. It’s an idea-driven science fiction novel, a narrative filled with what Darko Suvin calls nova, new ideas that here burst forth almost at once, and then continually.

The novel is told from two different points of view, both of them belonging to main characters—Green Jay and Crow. The other protagonist, Mac, is Crow’s friend and Green Jay’s lover. (Warning: everyone in this book has several names. Thus, Green Jay is also called Eva, and Crow is Brom, and Mac is MacIver.) Green Jay and Crow dislike one another intensely, a narrative tactic that works very well—a number of times, Daniels gives us the same events from these different points of view, creating narrative depth. Furthermore, the questions of individual identity and individual perception are among the themes Daniels is working with, and this tactic nicely works to underscore these concerns.

Green Jay is our first novum. She’s a duplicate, a printed copy of another person. She has literally been printed out by a 3-D printer, and retains the memories and the likeness of her original (another character, Olwin Duilis), though not her bodily stability. The Green part of her name denotes her main form of matter, which is flora rather than fauna. She is a plant rather than a mammal, in other words, and can—like plants—photosynthesize. Printing “doubles,” as they are called, is apparently common in this world. However, such printed copies of people degrade swiftly and die—usually within a few days. Much of the novel concerns Green Jay’s attempt to create stability for her printed body, to stay alive. Daniels also uses Green Jay’s character (among others) to examine the question of identity. Green Jay has Olwin Duilis’s memories; her past is Duilis’s past, in a very real sense. Is she Duilis? If not, why not? And if she is not Duilis, then who is she?

These questions are also asked by the presence of the Tenties, aliens come to Earth for reasons no one really understands. Though of alien gender, they exchange genetic material not just with each other, but with humans and other life forms they encounter. There’s a movement, the Hooks, that protests their presence on Earth; but once they have exchanged genetic material with humans, both they and the humans begin to change forms. Humans grow scales; Tenties modify more radically. These Tenties help keep Green Jay alive, though we’re never quite clear how. Something to do with their ability to modify living forms, I assume.

Tenties also have the ability to merge with one another, joining not just their physical but their individual identities with other Tenties. What becomes of the individual when several individuals become one individual? This is a question that has been asked by other works of SF—I’m thinking Steven Universe in particular—and I wish Daniel’s narrative had explored this particular aspect of her story more fully.

Crow, meanwhile, is a disaffected young man who delivers drugs for the local crime boss, Guerra. (To be fair, almost everyone in this near-future novel is either jobless or part of a crime syndicate.) Crow is likable enough, though something of a cipher. He is without ambitions or any real interest in anything except food and hanging out with Mac. Green Jay calls Crow a child, and this is accurate, at least so far as his personality is concerned: he has a child’s lack of interest in anything that is not directly affecting him, and a slight problem with object permanence besides.

Crow is, however, interested in, though very wary of, the Tenties, and has robot best friends. For their part, these robots are (I think) denizens of Earth, artificial intelligences with self-awareness, robotic bodies, and free will. Like the Tenties, they are capable of modifying their forms, and do so with a zesty glee. Robots are buskers, musicians, and magicians (at least the ones we meet are). They make their living through entertaining. They also—as we learn later—have the ability to move across time lines; or as this novel calls them, time-bubbles.

There are hints throughout the text that Crow’s best friend and partner in the drug deliveries, Mac, is some sort of cyborg. He is wired, with some sort of under-the-skin blue circuitry, has an eidetic memory, and is skilled at innovation. This memory and skill seem to be connected to his enhanced status; and the possibility is held out that he from the future, or at least a future.. This enhancement allows him to create and to communicate with all sorts of clever technology.

All of these characters live in Barlewin, a town on a near-future Earth. Barlewin has been ravaged by climate change, and, aside from some low-tech farmers scratching out garden farms, no one in Barlewin seems to have a legitimate job. We have the robots, who entertain people; we have the Tenties, with no visible means of support; and we have Crow and Mac, who work for the local crime boss. This is a desolate, grim future—though a government exists, apparently, since it is providing people with puzzles and math problems to solve, via “brain-training” sessions on public screens.

What infrastructure or economy Barlewin has seems to come from Guerra, who has expropriated the High Track, a part of Barlewin which once belonged to the city—it seems to have been a kind of park, renovated out of a railway station up on a high hill above the city. Guerra now controls the High Track, and controls the economy of Barlewin. Almost everyone we meet either works for him, or works for those who work for him. The result is a depressing, grim world, without much hope or possibility for hope. The town’s water tower, for example, will become important; but, in this drought-ridden future, it holds no water. Instead, its great tank is painted—at least in Crow’s time line (or, in the novel’s parlance, time-bubble)—with a giant image of a Stick Man.

I’ve spent so much time on the characters and the world because the plot is the least interesting part of this story. When the novel opens, Green Jay is in Guerra’s custody, living in his giant, barren house, the High Track. From her basking position in the greenhouse, she watches the delivery of a “Time-Locked” package—one which skips around through time-bubbles—to Guerra. The package is “locked” to its courier, who travels among the time-bubbles with it. This is an expensive—and to the courier dangerous—way to keep packages from being stolen. Crow sees the package arrive as well, and, for some reason that is never made clear (poor impulse control, Crow claims; his destructive nature, says Green Jay), he volunteers to carry it up to Guerra in the High Track. He does this even though he knows a time-locked package is, as he puts it, a “shit of a thing.” Skipping around through time is profoundly unpleasant, at least to humans, leading to nausea and other issues. The package, it turns out, contains vials of a substance which, when pushed literally inside Green Jay, helps to keep her alive. We eventually discover that Olwin has paid Guerra to get these vials to Green Jay. Again. it’s never exactly clear why Olwin wants to keep Green Jay (her copied self) alive; in fact, for most of the narrative, Crow, Mac, and Green Jay believe Olwin wants to eliminate Green Jay.

The novel has a plot, then; it’s just very scattered, which damages the tension pretty seriously. We’re halfway through the narrative before we learn that the Hooks manage to get the Tenties exiled to a time-locked dome. This become Crow’s compelling motive, from that point on. He wants to save the Tenties, to help them escape from this dome. He risks his life, in fact, and the lives of others, in order to free a group of Tenties from a time-locked dome. But, given that at the novel’s opening Crow had an equivocal attitude toward the Tenties at best, this is no more convincing a character arc for him than Green Jay’s is for her.

This opacity is a recurring motif. For example, we’re told that Crow is changing things as he jumps from time-bubble to time-bubble, and that this is a problem—that he must to return to his own time-bubble—but it’s not clear what is at stake if this is the case. We don’t see what he’s changing, or why his changing things is a bad outcome. Mostly the novel follows Crow as he jumps from time-bubble to time-bubble, meeting other characters in the various iterations of their lives. This is interesting enough, episode by episode. We learn, for instance, that in some time-bubbles Green Jay is the founder of a religion which worships her, and that a new species, the Humants, half-plant and half-human, has been made in her image. We see various versions of Crow, including one in which he has replaced Guerra in the High Track. We meet Olwin’s parents, or iterations of Olwin’s parents, who are running different versions of the farms. There is a lot about what Crow eats, in various time-bubbles.

Likewise, iterations of the greenhouse, along with the stairs up to the High Track and Barlewin’s farms, recur as the main stages for events: as we skip through time-bubbles, we see many different versions of each place. Again, this addresses the question of identity—are these the same greenhouses? The same sets of stairs? They certainly seem to be different. Is there a “real” part of them, an essential self, that transfers from bubble to bubble? Or is every aspect of reality accidental?

The most important question, however, is: does all of this add up to enough to create a compelling narrative? It didn’t for me. The abundance of cool ideas was fun, and, again, episode by episode the novel is quite readable. Some of the questions surrounding identity and how it is created raised by the narrative are interesting. But it feels like Daniels is a juggler, tossing these shiny ideas in more and more complicated patterns, without really finding any way to perform a satisfying finale. If you like cool ideas, then, Green Jay and Crow is worth reading. If you like cohesive narratives, maybe not so much.

Like Loading...
© Copyright 2019 By: Kelly Jennings
About Kelly Jennings
Kelly Jennings has published short fiction in Daily Science Fiction, The Sockdolager, and Strange Horizons; her first novel, Broken Slate, was released by Crossed Genres Press. Read more about her at her blog, delagar.
No comments yet. Be the first!