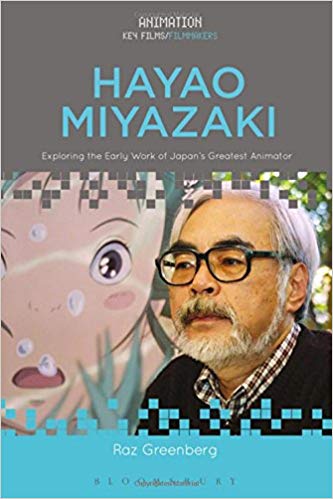 The subtitle of Raz Greenberg's work on Miyazaki suggests much of the potential of the book itself: Exploring the Early Work of Japan's Greatest Animator. For Miyazaki aficionados, this should be the holy grail of scholarship and criticism, a glimpse into heretofore unseen (in the West) works that will help unlock the oeuvre of one of the world's most complex and beloved animators and filmmakers. One gets the sense reading this book that Greenberg is not a Miyazaki fanboy, not blinded by otaku mania, but more of an interested partisan. He likes the filmmaker, and he sees the purpose of his book as showing "Miyazaki in context," against both the "film, television, and literature that inspire him," and within the "emerging post-World War II Japanese animation industry" (p. xii). All to the good so far.

But this is a short book, and it attempts to tread a line between the depth of criticism that Miyazaki fans and film scholars are looking for and achieving a more general vision of Miyazaki's career that casual viewers might find useful. Ironically, it is Greenberg's characterization of Japan's animation industry at the closing of the twentieth century which provides the best description for his own work, one which "cannot find a proper path" (p. xv). This is not to say that the book is not a positive addition to Miyazaki scholarship, or that there isn't a wealth of information to be found in these pages; reading it, one is hit with repeated epiphanic moments as Greenberg assists readers in hearing the persistent thrum of Miyazaki's recurrent tropes. Rather, one should temper one's expectations with the knowledge that, as Greenberg characterizes another scholar's work on Miyazaki, this book has a "stiff structure, which reads a bit too much like a thesis manuscript" (p. 153).

As a chronological examination of Miyazaki's early career, Greenberg's beginning chapters offer an intriguing and well-researched look into two main sources to which the casual Miyazaki fan may not have access: first, interviews with and articles by or about Miyazaki; and second, early work for television that was never translated into English or remains otherwise hard to find. Greenberg's ability as a researcher and access to materials (his author blurb lists him as a teaching fellow at two Israeli universities) is well worth the cover price here. Two films—Panda and the Magic Serpent (1958) and The Adventures of Mr. Wonderbird (1952, released in Japan in 1955)—and two animators—Osamu Tezuka and Tetsuji Fukushima—are given serious examination. The two films make frequent reappearances throughout: Panda for its thematic and atmospheric elements—such as its "portrayal of a strong woman as the protagonist" (p. 4), the "seamless weaving of visual and narrative elements from the east and west" (p. 7), and its "portrayal of the struggle between society and the individual" (p. 7)—and Wonderbird for the more holistic but just as recognizably Miyazakian "understanding of an animated world as a multi-layered entity that exists beyond the currently running scene or sequence" (p. 11).

Regarding the animators, Miyazaki's largest influences from Fukushima are the "epic scope of the story along with the richly detailed designs of exotic landscapes and especially vehicles" (p. 3), while his relationship to Tezuka is more complicated (and fascinating). Osamu Tezuka, "Japan's 'God of Manga'" (p. 10) was, naturally, a source of inspiration as well as a figure to struggle against. Like a poet who falls in love with Ezra Pound and only afterward discovers his anti-Semitism, Miyazaki was disturbed by Tezuka's ties to and support of imperial and colonial Japan; when he realized that his early works were inspired by Tezuka, "he collected all of his initial sketches, and burned them" (p. 3). Greenberg arguably downplays the importance of this "anxiety of influence" (p. 3), though he knows enough Harold Bloom to allude to him here. It doesn't take much imagination to see in a youthful, teenaged Miyazaki's burning of his own work—the defiance and disgust, the determination and solitude of that moment—a metaphor for Miyazaki's larger creative process: he would stand on the shoulders of giants, yes, but in his own way; he would reject militarism, colonialism, and rule-following in favor of autonomy, individuality, and the need for harmony between man and nature. See, for example, Princess Mononoke (1997), arguably his most violent film, in which "Ashitaka's battle for peace, as the film shows, is a losing one. Even if the film's end implies hope, it is achieved at a tragic cost of many deaths" (p. 138). One can see, in eighteen-year-old Miyazaki's defiance, the progenitor for one of his most common archetypes, what Greenberg describes as the "civilized boy in the jungle" (p. 18)—though this putative connection between creator and creation is absent from the text.

The civilized boy is the outsider who comes to teach the savage people of the jungle—be it wild or urban—the "correct" way to live. Usually this is associated with simplicity, harmony with nature, and violence only used as an element of defense and for peace. In Greenberg’s words, the civilizer is:

usually an orphan boy who possesses incredible (almost inhuman) physical strength, and who is brave, honest, kind (if not always knowledgeable of the acceptable social norms when it comes to manners), pure in heart, and determined to save the people of the 'jungle' […]. In other words, the Miyazaki male leads tend to be just too perfect, and not all that interesting. (p. 19)

See, for example, Conan from Future Boy Conan (1978), Pazu from Castle in the Sky (1986), and Ashitaka from Princess Mononoke, or, in gender reversal, Nausicaa from Nausicaa of the Valley of the Wind (1984). Once you start to see this trope, it's hard to stop seeing it. A few other archetypes that Greenberg identifies are the "wise old woman" (p. 112) seen in Castle in the Sky, Howl's Moving Castle (2004), and Kiki's Delivery Service (1989); technology existing "harmoniously with nature and the environment" (p. 115) such as in Nausicaa and Castle in the Sky (and subversively inverted in The Wind Rises [2013]); and, closely connected to that last one, peaceful agricultural communities as seen in Castle in the Sky and Miyazaki's versions of Anne of Green Gables (1979) and Heidi of the Alps (1974) (p. 113).

All of these archetypes suggest a larger meta-archetype that characterizes much of Miyazaki's work. It is one which, while Greenberg pays lip service to it, he doesn't spend much time with in the broader context of his examination: the young person who is at odds with the worlds of children and adults and needs help growing up. Sometimes what propels these characters is tragedy, as in My Neighbor Totoro (1988), Ponyo (2008), and 3,000 Leagues in Search of Mother (1976); other times it is the need for growing up itself, as in Kiki's Delivery Service, Spirited Away (2001), and The Wind Rises—and those three films span the continuum of what propels the characters to mature, from neutral (Kiki needs a job) to negative (Japan needs Jiro to design planes for war). There are adult problems in these worlds, of course: Chihiro's parents are busy and ignore their daughter in Spirited Away; Sōsuke's harried mother, Lisa, and largely absent father, Koichi, in Ponyo have their own battles and miss their son's importance in restoring balance; and Eboshi's determined and desperate struggle to keep Irontown free in Princess Mononoke. But these are supplementary narratives to the larger and more important story of the protagonist. This is not to suggest that my reading of the films should prevail; instead, I'm pointing out that Greenberg's reading, while knowledgeable and detailed, is missing that larger, unifying vision that would make his a thesis within which all the disparate parts may cohere.

On the more localized level there are missteps with the writing, too. Part of this has to do with the brevity of the book, but there are fairly important claims that go largely unsupported and unexplained, such as the "deep impression" that The Snow Queen (1957) made on Miyazaki (p. 12), or the "obvious" (p. 96) visual and thematic influence of Fantastic Planet (1973), Greenberg's cursory consideration of a scene of which I did not quite follow—despite having seen the film. There are also other, smaller claims that go unsupported or are just too vague: episodes of Sherlock Hound (1985) are characterized as "equally entertaining" (p. 71), and "a highly entertaining story that becomes even more entertaining" (p. 72); a scene in The Wind Rises is described as "an amusing reference to Miyazaki's own work" (p. 150); and Miyazaki’s direction of the "energetic, fast-moving" final two episodes of Lupin is characterised as carried off "with great confidence" (p. 68). Without evidence or explanation, what do those descriptions even mean? What makes these examples entertaining or amusing or confident? Some plot points follow these observations, but the connections are absent. It is as if his arguments are so obvious to Greenberg that he doesn't bother to connect the dots for readers.

On the other end of the spectrum, Greenberg expresses frequent uncertainty, too: Porco Rosso (1992) "perhaps served Miyazaki as a means to comment" on the animation industry (p. 131); the Ralph Bakshi film Wizards (1977) "may have contributed somewhat to the design of the bearded characters of the Valley of the Wind" (p. 98), or the Oms from Fantastic Planet "may have been one of the sources of inspiration" for Nausicaa's worm-like creatures (p. 97)—despite previously claiming a different (and more compelling) inspiration from Dune (p. 92). Admitting uncertainty can be a boon in the relationship between author and reader, as it invites readers into the writer's confidence—we become coconspirators, co-creators, co-critics. But the rhetorical use of uncertainty has to be infrequent, purposeful, and attenuated by clear reasoning and purpose surrounding that uncertainty, which, unfortunately, we're often missing here.

Where does this leave us? Fans of Miyazaki will find much to interest them in this book. Of particular note are the detailed examinations of Miyazaki's work on Lupin III (1972), The Castle of Cagliostro (1979), and the entire chapter (tied for longest in the book) devoted to Nausicaa of the Valley of the Wind. Scholars of film may find some useful features, particularly those who lack the kind of research access granted by a major university or who, like many of us, do not possess Japanese fluency. Casual viewers of anime, however, are not likely to find much to keep them in this book; a lot of it is dry, and many of the allusions will perhaps be unknown to them. Greenberg's description of a reference work in his endnotes is apt for this book, too, as it, too, tends to be "somewhat repetitive and can sometimes be a chore to work through" (p. 154).

That chore does have unexpected payoffs, however, and for readers willing to put in the time and attention, and willing to do some of the author's work in connecting the book’s more discrete elements together, there is a surprisingly robust amount of detail packed into this slim volume that is likely to change the way readers watch and reflect on one of the greatest animators of all time. If you’re looking for a single text that engagingly covers the breadth of Miyazaki’s most popular works, this is not the book for you. But as a well-researched, if sometimes tedious, look at Miyazaki’s influences and early to middle years as an animator and director, Greenberg has a lot to offer the interested reader.