Reviews
Size / / /
Jokes for the Gunmen by Mazen Maarouf
By: Vivian Wagner 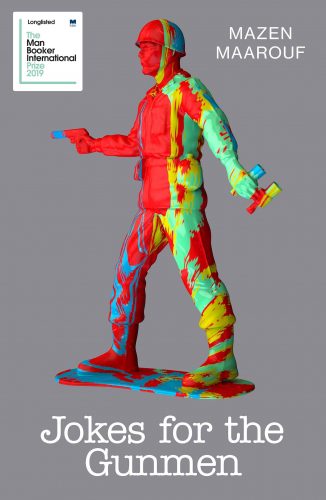 Mazen Maarouf’s Jokes for the Gunmen is a surreal collection of stories about trauma and humor. Many of the stories focus on the strange and complicated relationships that develop within families during wartime. In order to bring these relationships to life, the stories travel beyond the boundaries of any particular reality and into the realm of dream-like, speculative, and sometimes absurdist fiction.

Maarouf is a Palestinian-Icelandic author who was born in Beirut and currently splits his time between that city and Reykjavik. His stories, translated skillfully and fluidly from Arabic by Jonathan Wright, embody Maarouf’s deep understanding of displacement, uncertainty, and violence. At the same time, his stories demonstrate how humor can be both a coping mechanism and, at times, a weapon.

Some of the stories go so far into a kind of magical realism that they’re difficult to understand, much as dreams, upon waking, can seem unspeakably absurd. Other stories in the collection are more straightforward and simple, but even they end up swerving into strange and unpredictable territory.

The first (and title) story, “Jokes for the Gunmen,” is composed of ten sections, all of them about a boy coming to terms with his family and the violence happening around them. The first section, “The Pepper Plant,” tells of a father who gives his son a pepper plant for his birthday to care for. The son says, “It was a strange present. I didn’t understand what it meant at the time. We could hear gunfire from time to time, but we grew used to it, as one grows used to the honking of passing cars” (p. 3). This casual juxtaposition of domesticity and gunfire is the first clue that the collection is dealing with a world askew, a world shaped both by small, familial gestures and by the unsettling and ever-constant presence of violence.

The son does his best to care for the pepper plant, and he sees its peppers as representing his family. At a certain point, though, when water is scarce, he chooses to drink water meant for the plant and then spit on it to give it its share. It’s a choice he makes to take care of himself in an uncertain and tenuous situation, but his father is furious with his son for the spitting and beats him with a belt—prompting the son to take a tearful revenge:

When my father went away, I went up to the pepper plant, sobbing, my eyes drowned in tears, and tried to work out which of the peppers held my father’s soul. it was easy. I chose the biggest pepper, broke it off spitefully and crushed it under my foot. (p. 5)

It’s a heartbreaking moment, and not the first in a collection that’s hell-bent on breaking as many hearts as possible, even as it tries to mend them.

The boy in this story is trying to make sense of his world, but there’s so much he doesn’t understand—not the least of which is this initial violence from his father. “The Pepper Plant,” as the opening section of the “Jokes for the Gunmen” story, sets the tone for a series of short snippets from this boy’s life, from trying to sell his deaf brother to gunmen who patrol and terrorize his street to working with the father to come up jokes to tell those same gunmen, in order to keep the family safe.

As he says in this section, “in front of a bunch of gunmen you have to be a good storyteller to win your freedom” (p. 25), and this, perhaps, might be seen as a thesis for the whole collection. Humor and storytelling might be the only way to survive in a war-torn and unpredictable environment, and the collection puts its readers in the peculiar position of being, in a sense, like dangerous and demanding gunmen. The ground in this boy’s world is constantly shifting, and he does his best to keep up with the horrors around him—often by telling jokes and making up stories—even as those horrors inevitably become part of his identity.

The next story in the collection, “Matador,” is a peculiar magical realist tale about an uncle who dies three times, continually coming back to life and carrying on as if nothing had happened. This uncle had dreamed of becoming a matador, and he bought the outfit of a famous bullfighter and would wear it while practicing on bulls at the slaughterhouse.

The first time the uncle dies, the family puts his body in the sitting room to stay cool in the air conditioning. The boy who narrates the story, however, begins punching his uncle’s feet, and somehow that action brings the uncle back to life—but he’s different and slightly smaller than he was before, so he can’t wear his matador suit. He dies again and is revived again, before finally dying for real when he trips over his baggy suit at the slaughterhouse. By that time, people are so tired of the uncle’s weird charades that only a few people attend his funeral, and the son is left with the task of selling the matador suit, which ends up fetching a good price, after all.

Like other stories in the collection, the narrator in this story is trying to make sense of a weird world. He tells the tale as if it’s no surprise that a bullfighting uncle rises from the dead, and that kind of deadpan delivery of wild and magical happenings is present in many of this book’s stories. Strangeness is pervasive, and sometimes the best we can do is to report as accurately on that strangeness as we can, all while trying to keep a straight face.

Speaking of keeping a straight face, another story in the collection introduces us to a young man who cannot smile or tell a joke. As the narrator says, “I don’t have a sense of humour, to be honest, and I don’t understand why people smile. You’ll usually find me scowling. I don’t look at faces when I’m walking along and I don’t say hello to anyone” (p. 97). Weirdly, when he goes to a psychiatrist to get checked out, the doctor puts a stethoscope to his chest and doesn’t hear a heartbeat, but rather “Ha, ha, ha” (101), suggesting that there’s some kind of joke in there, though it’s not yet found a voice. By the end of the story, however, he discovers that,though he himself doesn’t smile, he can wield humor like a weapon, when an old man dies from a joke the narrator makes: “although I’ve spent most of my life unable to smile, I now know that I’m a man who can kill people with a joke” (p. 106).

Another story, “Other-Peoples’-Dreams Syndrome,” tells the tale of a man, Hossam, who’s lost the ability to distinguish between his own consciousness and that of others. When he dreams, we hear, “he isn’t the main character in the dream. In fact he may not even be a character at all” (p. 109). He’s also not certain that there’s a distinction between what he dreams and what actually happens, and so he believes that when he shoots a boy in his dream it might, in fact, have happened. The narrator tries to convince Hossam otherwise, but the narrator himself seems to wend in and out of dreams, so by the end it’s not clear who’s dreaming what, and what actually happens. Facts are mundane, and the truth is in storytelling itself.

The surreal stories in this collection all grapple with what it means to grow up in a violent environment, and the ways that violence shapes and distorts children, families, friendships, and communities. The narrators in these stories represent different stages of a man’s life, from childhood to adulthood. Each story is marked by trauma—and each explores the ways that trauma can be transmuted by humor, storytelling, and art. The stories are sometimes disturbing, but always engaging, posing questions about the nature of reality and experience, and how we can’t always trust what we see with our eyes or even what we feel with our hearts. The world’s shaky and peculiar, always apt to surprise us just when we start to feel settled.

Maybe the only way to describe a world like that, ultimately, is to use the tools of speculative fiction, imagining realities that may or may not exist but that somehow speak of deep psychological or cultural truths. This is, perhaps, the most interesting thing about this collection—the way it uses speculative fiction to grapple with deep and enduring cultural wounds. War might be the most speculative event that can happen, upending normalcy and replacing it with a constantly shifting and unpredictable landscape. And maybe the only way to make sense of such a situation—and to survive it—is to tell a joke.

Like Loading...
© Copyright 2019 By: Vivian Wagner
About Vivian Wagner
Vivian Wagner lives in New Concord, Ohio, where she’s an associate professor of English at Muskingum University. She’s written reviews for NewPages, Brevity, Pedestal Magazine, and The Georgia Review, and her work has appeared in The Atlantic, Narratively, Slice Magazine, and other publications. She’s the author of a memoir, Fiddle: One Woman, Four Strings, and 8,000 Miles of Music, and several poetry collections: The Village, Curiosities, and Raising.
No comments yet. Be the first!