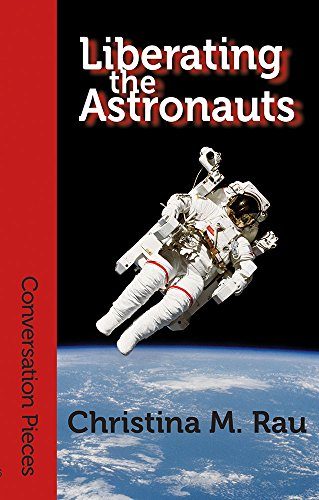 More often than not, a poetry collection is a creature of parts. There may be an overarching theme, there may be sequences within the whole, but it’s hard not to read one and recognise that what you’re holding in your mouth or hands or brain is more or less cobbled together from disparate things.

I don’t say that to be denigrating; quite the opposite in fact. As a frequent poetry reader, for me it’s part of the charm—and it’s a charm that can be deliberately ratcheted up when the poet takes that potential for disjunction, for dislocation, and runs with it. That’s what Christina M. Rau has done in her recent collection, Liberating the Astronauts. It’s a grab bag not only visually—the text is bookended with astronomical photographs sourced from NASA—but in genre. There’s science in here, and science fiction, but there are also more general poems interspersed with the rest, and the poems themselves are frequently made up of images and sensory details that are at first glance fundamentally foreign to each other, or isolated from their normal environments and matched with something less common—for example in “Chasing Zero” (pp. 2-3) “There are people who can taste color. / They call themselves synesthetes. / They say green tastes like almonds. / I’ve heard cyanide does, too.” Or in “Opposition Night” (pp. 14-15), where a road trip through the solar system references freeze-dried ice cream, roller skates, bears, “waitresses in white sneakers / named Luanne”—and does it with a sense of fast moving wonder.

This is something I’ve come across in science poetry before. I was reminded very much of the poet Bernadette Hall, who spent time in Antarctica as a visiting artist and subsequently wrote helter-skelter poems crammed full of impressions and experiences and wonder, a long breathless rush that came out in collections such as The Ponies (VUP, 2007). Rau is more concerned with astronomy than Antarctica, but the same sense of wonder is there—the fascination of an artist reaching into, and being surrounded by, a discipline not her own—and the poems that focus on this are really enjoyable to read. Less successful, perhaps—or less successful to me, because they lack that emotional sense of wonder and crammed-in experience that works so well in poems like “Neutron Dance” (p. 10) and “Night Light” (p. 11)—are the erasure poems.

Oh, those erasure poems. There is a particular technique in poetry where you take a source text and delete various portions of it, and the remainder (often including the shape of the deleted text) forms the poem. The presentation of erasure poems can vary, and Rau uses two different methods here. In “The remains of the” (pp. 26-27), a passage from chapter two of The Great Gatsby is redacted so that it ends up looking something like a censored document, with much of the text blacked out. The two other erasure poems, “Recalling Solaris” (pp. 53-58) and “(Or Maybe It Went Like This)” (pp. 59-63), both taken from Stanislaw Lem’s Solaris, remove two different sets of text from the same original passage. These poems are tricksy in their typography, using different font types, tables, and columns of words, but they present more typically, without the black shading that so firmly indicates the removal of words.

They’re certainly thematically relevant, if one thinks as I do that the strength of this collection lies in the disparity of its images, and in the isolation and recreation of meaning that the various contrasts and disjunctions provoke. You can, though, admire a technique without enjoying it. Erasure poetry can produce interesting commentaries on the original text, on the role and influence of negative space, but it can all too easily appear a jumble, an exercise of style over substance. Sometimes this is actually the point, with erasures being deliberately randomised; but, if that’s what Rau has done here, then she’s had some lucky throws—so my suspicion is that it’s more directed.

“The remains of the” in particular appears deliberate, and the resulting poem, though dislocated, is compelling in its dislocation. Far less successful for me are the Solaris poems—the disruption of the source is too scattered, to my mind, and they’re so long (together all three erasure poems comprise about 15% of the entire text) that the technique becomes quickly tiresome. Not to mention the fact that I like to read poetry aloud, and how does one read off a table or a list of columns without falling into drone and boredom? Frankly, I did not and cannot.

It didn’t help, perhaps, that I didn’t recognise the source material. (I recognised the titular reference to Solaris, of course, but not the altered text.) Apart from the fact that the text of both has been so altered, I think perhaps I wasn’t meant to recognise it—at least not initially. Rau has a couple of pages of notes at the back of Liberating the Astronauts, giving the relevant details for selected poems, and this isn’t uncommon in poetry collections. But it’s not the only way. Kim Rosenfield, for example, in her science-based poetry collection re: evolution (Les Figues Press, 2008), uses footnotes instead of endnotes, and occasionally Rau does as well—as for example in the poem “Microsampling Mission” (pp. 38-39). Fair warning: of the two forms, I far prefer the footnotes. I’ve spent too much reading time flipping back and forth in books when I could just glance down instead, and overall footnotes strike me as being less disruptive to my reading experience, though clearly your own mileage may vary. One can’t of course blindly ascribe motivation to an author with any real level of confidence, but my instinct, on reading the notes, was to immediately flip back to the three erasure poems and read them again, to see if my opinion of them changed.

It did on the Gatsby poem—quite by chance I happened to have read The Great Gatsby recently, and recognition improved my opinion of the poem. The mirror reflection of longing that bounces back and forth between the source and the resulting poem does lend it more emotional power. It can hardly help to do so, and delaying the source recognition by tucking the relevant note some fifty pages away is a particularly effective means of encouraging the reader to not only read again, but to think again.

The Solaris poems, on the other hand … I was quickly bored the first time and even more quickly bored the second. As I said, perhaps it’s the length of them: an experiment gone on too long becomes tedious whether it’s on the page or in the lab, and I couldn’t parse enough meaning out of the remaining scraps to make a third attempt.

The lack of connection amongst the disjunction here is underlined by a more successful series of contrasts, for example in the implicit pairings of poems that alternate romance and science in order to give a portrait of a (potentially?) failing relationship. “Perfume” (p. 24) illuminates “The Atomic Hypothesis” (p. 25) and vice versa; the same mirroring can be seen in, for example, “Detrain” (p. 28) and “The Going” (p. 29). Possibly the finest poem of the lot, “Kepler’s Laws” (p. 30), does it all in one—“We get wobbly. We get stretched. / Oblong motion, we pass each other. / Imprecise retrograde”—and against this Keplerian understanding of movement and change the fundamental, experimental disjunction of the Solaris poems appears, I think, to even less advantage.

But this is an experimental collection—a collection, at least, that values the process of experimentation. This is clear not only in Rau’s varied techniques, but in the ongoing matter of subject. There are poems scattered through the collection that are specifically concerned with experimentation, or with the scientific practise of it at least.

“Curiosity” (pp. 50-51) chronicles the experiments of the Mars rover: “Every day / a record of date, time, temperature. / Every day, roving and digging.” But “Curiosity” is more than mechanical ambition; it ends with the birthday celebrations of mission control, which has famously programmed the rover to sing “Happy Birthday” to itself on the anniversary of its landing. This is curiosity on a number of levels, and it’s also the insertion of quirk and wonder and warmth into method, the party hats and burning candles, the cake on a water planet. These are dislocations that fit together, and it’s not the only example of such textual (authorial) intersection. The “Microsampling Mission” poem, mentioned above, is another such example, in which a colour keeper or conservator travels the galaxy, cataloguing the colours of distant stars and planets. “Tools of the lab lugged up across / the universe in a tiny pod / for one, to preserve / the history of hues”—a history of art and science that ranges from Mars to supernovas, tested on a “Wilson 980 x-ray.”

But science, in Liberating the Astronauts, isn’t just something that happens to other people. The poem “Chem in Everyday Life” (pp. 44-45) is a first-person piece recalling what I can only assume is Rau’s actual university experience, in a science class “Aimed at young people whose / futures were not in science.” Exposure to science has proved a valuable experience for many writers; as with Hall I’m also reminded of Diane Ackerman, who produced a collection of poetry on the solar system (The Planets: A Cosmic Pastoral, William Morrow & Co., 1976) under the postgraduate cross-disciplinary supervision of Carl Sagan. Rau’s interest is chemical rather than astronomic, however—she’s making nylon. Presumably, she writes, so this piece of everyday chemistry can be useful in the advent of future sartorial emergency: “for when it would be five years later / and we had an interview and could not / find a pair of stockings without a run.” There’s something delightful about this, about the genuine hope of that Chemistry in Everyday Life lecturer that this could potentially be a useful skill. It’s charming, and is one of the few touches of humour in the collection, but it emphasises, yet again, the text’s focus on dislocation, on communication, and on value.

I myself am a fount of useless information (though I’ve never made nylon, alas), and in many ways that’s what this experiment in material-making is: useless information that’s helpful for manufacturing but won’t make it back to the kitchen, or the bathroom, or wherever this individual attempt to produce a homemade stocking is meant to take place. I mean, I joke when I call such information “useless,” because although it is useless in some respects I’m of the firm belief that in general, no knowledge is ever really wasted.

It’s all got value.

That value may be hard to see sometimes, mashed up as it is in small form against other small forms, facts crammed together cheek by jowl in the brain (on the page). But, as Rau comments in “Where to Go on a Rocket Ship” (pp. 46-47), these dislocations and juxtapositions can come together to a larger whole: “Here is the place where wisdom lives— / an accumulation of every small / knowledge scrap bonds to a whole— / where instead of seeking, we can rest, knowing.”

Like Loading...
© Copyright 2018 By: Octavia Cade
About Octavia Cade
Octavia Cade is a New Zealand writer. She's sold close to 50 short stories to various markets, and several novellas, two poetry collections, an essay collection and a climate fiction novel are also available. She attended Clarion West 2016, and is the Massey University writer-in-residence for 2020.
No comments yet. Be the first!