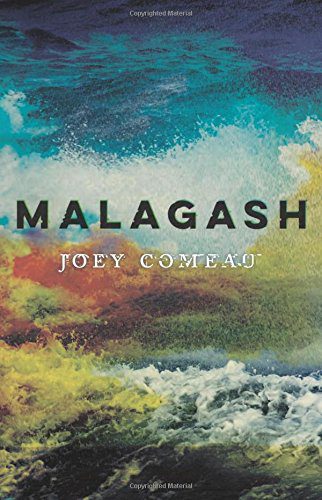 Malagash, written by Joey Comeau and released in 2017 by ECW Press, doesn't feel like a book. The plot is premised on a computer program that the young protagonist Sunday is in the process of writing in order to help her father to achieve immortality. By capturing his voice and laughter in .wav files, as well as recording the hushed conversation from hospital rooms as her father dies of cancer at a too-young age, she hopes to create a computer virus that will then infect others with her father's living memory. The novel is filled with the file extensions written in computer code right alongside the recreated conversations she records surreptitiously on listening devices as she, her brother, and their mother go back and forth across the city of Malagash.

The novel, like much of Comeau's other work, is written in present tense from a first person perspective. This POV hastens the pace at which Sunday goes through and collects these files of her father, always running against the clock of his mortality. The handful of other books I've read with this perspective are dystopian novels (The Hunger Games most strikingly, along with The Last Policeman series by Ben Winters and The Evolutionist by Rena Mason all share this writing choice); it's a hurried pace that makes me feel as if I am always on the edge of my seat. In dystopias and horror novels, this kind of frenetic pace makes sense, as it does with Comeau's other works, especially his webcomic A Softer World. The reader should be at the edge of their seat because the narrative isn't done yet and they must wait for the true horror of The Hunger Games's dystopia to reach its climax, while in A Softer World, the immediacy of the emotions becomes visceral in the present tense and episodic form. In Malagash, though, the reader is on the edge of their seat because of fear—but fear of the precise thing they desire: the end of the book. The closure of the novel means the reality of death, and as much as we want to keep going and read as fast as we can, we ultimately don't want to continue. In this way, Malagash offers a contemporary narrative about grief and the complex emotional struggle it engenders—the persistence of time running against the repeated loop of memory.

As Sunday worked on her virus in the novel, I was reminded of Hackers, the 1994 movie that I've come to love as a darling of the 1990s. Since Comeau was born in 1980, I can only assume he's also been influenced by the anarchic cry of “hack the planet” when he created Sunday, along with cyberpunk thrillers. In much of Comeau's prose, I hear antiquated nostalgia for a past vision of the future of technology and the hope it once offered. Though Sunday is a young adult in this work, she reads like an adult who has access to that time period. This can sometimes be a problem in novels—I actually despise it when children or teens read as mini-adults—but Comeau provides a plausible reason for Sunday's apparent maturity and beyond-her-years wisdom. Her tongue-in-cheek dismissal of the daily, parting ritual around her father's sickbed is written off with their standard exchange of “goodbye forever.” There is a strong resistance to sentimentality among all the family—as seen when the mother consistently treks back and forth to get coffee in order to get out of the hospital room, rather than play the wife who stays by his side at all times—but it is also made clear that these resistances to their emotions are defense mechanisms. Sunday's cry of “goodbye forever” isn't callous, and it isn't even her anachronistic attempt at humour that makes her seem from a different time. It's mimicry of her dying father who does not want to believe he is dying, so instead makes a joke out of it.

Sunday's role in the story is precisely that mimicry she does to avoid death; it's what she aims to capture with her computer program and subsequent virus. If she can replicate her father through these .wav files and particular snippets of conversations and stories, she believes she can keep him. He can become the proverbial ghost in the machine and all the melancholy she once felt about death will be assuaged through technology. She is so convinced of this until the very day where he does die. Suddenly, the bed is empty and there is nothing to mimic anymore. And she must truly be alone with herself.

When the father dies, I was expecting it. But the fact that he dies so soon in the novel was refreshing to me, because it meant that Malagash wasn't really about death or even about a computer virus. As much as I want to read this work in the vein of William Gibson and other Canadian writers of sci-fi and fantasy, the only thing that is speculative in this technology are the emotions it engenders. This isn't a sci-fi story of progress; it's a story about how sadness and grief become mechanical and banal to the point where Sunday and her family need the computer to access the full extent of their emotions. There has been much (some would say too much) written about how the younger generation is always distracted and how everyone blames their distraction on iPhones and internet. Indeed, an easy reading of Comeau's story would be that these people can't feel feelings so they drown themselves in technology—but that is not the case at all. They use technology as a tool for grief, tapping into the Greek root of the word technology as a teachable art. Grief is a teachable art in this story, one that Sunday tries to pass on to her brother after her dad is dead and gone. Her insistence on the virus as the answer, and her brother's help with making it manifest, becomes not so much a memento mori of death itself—since death needs no proof when they already have an empty bed in a Malagash hospital—but a way to deal with the sadness that envelopes them after the funeral is over. The virus is not a way to facilitate immortality, but community.

The last passage of the story, something which I won't spoil here, is another testament to this fact. In the same way that funerals are never about the dead but about the living, the computer virus is not about her father, but everyone else he touches. Titling the work Malagash, after the peninsula in Nova Scotia where the story is set, is yet another way to further the point about community over immortality. It is less about a family that this death happens to, and more about the countless numbers of families that have had this happen to them. Cancer is as common as computer virus; a never ending ones and zeros of suffering.

Malagash ultimately doesn't feel like a book to me because it feels too familiar. It is remarkably short (I read it in an afternoon), and it doesn't linger on something we already know too well. Instead, Comeau creates his own kind of virus with his prose, something I haven't been able to shake off since reading.

Like Loading...
© Copyright 2017 By: Eve Morton
About Eve Morton
Eve Morton is a writer living in Ontario, Canada. She teaches university and college classes on media studies, academic writing, and genre literature, among other topics. She likes forensic science through the simplified lens of TV, and philosophy through the cinematic lens of Richard Linklator. Find more information on authormorton.wordpress.com.
No comments yet. Be the first!