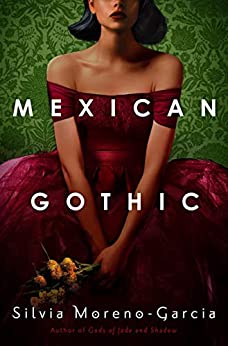 “Phenomenal” is a funny word. Synonyms like “outstanding” and “exceptional” indicate a kind of outside, beyond the boundaries. But taken on its own parts, “phenomenal” means something like: having the form of an object of perception. The sense of the senses. It is a word with a surprisingly material subjectivity bound loosely behind an idealistic superlative. Which might also suffice as a loose description of Mexican Gothic.

At its most superlative, Mexican Gothic is a ghost story that takes clear inspiration from Wuthering Heights, “The Yellow Wallpaper,” and James—both Henry and M. R. It concerns Noemí Taboada, a socialite who lives in Mexico City in 1950 and who is recruited to save her newlywed cousin, Catalina, from an imperial and imperious mansion known as High Place. She travels there and is quickly off-put by the place and its inhabitants—not least because they are a British family who immediately start talking eugenics—but subsequently gets caught up in the intrigue of the place and its people. Also, the ghosts.

Like many great ghost stories, this novel takes its cues from history and weaves it into a personal narrative. Here the cues include colonialism and revolution, the exploitation of workers in extractive industries, the race science that develops alongside that, and an engagement with family which seems wholesome but never loses the possibility of horror. The narrative it weaves, however, is discontent with merely metaphorizing history as haunting.

Instead, Silvia Moreno-Garcia picks up a M. R.  Jamesian influence and runs it through the century of criticism that has followed Lovecraft, up to and including the New Weird. James was one of the great writers of ghosts that don't reduce to Casper. Instead of people with "unfinished business," James's ghosts were specters of the everyday, objects and sounds and horrors so familiar that they were nearly beyond ken. In this, James was one of Lovecraft's greatest influences: Lovecraft took this sense of the unknowable and thought, of course, about how icky he found the inhabitants of Red Hook, native peoples of all lands, and his own cheap, miserable mind.

Following this queasy precedent, Mexican Gothic handles this transition from Gothic to Weird horror in an especially adept way. It eventually swings from a Brontëan ghost story to something a little more in line with New Weird authors like Caitlín R. Kiernan and China Miéville, rooting its haunting in (if you'll allow me—if you are especially spoiler sensitive, skip the next five words) a sapient scream of mushrooms.

If there is a problem with Mexican Gothic—and, having had time to mull the book over in my head after reading, I'm not entirely convinced there even is one—it is a problem with genre. Moreno-Garcia lets each element of her novel breathe by tacking through mystery and surrealism, dreams and intriguing goings-on, and the investigation of the intriguing goings-on of dreams. As disparate as all these modes can be, they all fit under the horror-thriller umbrella. Each works on the anticipation of ignorance and the release of knowledge, on a fundamental drive toward explanation or revelation. Mysteries and ghost stories beg to be solved; the Weird and surreal insist that solutions are immanent or impossible. To the reader or to the cosmos, knowledge is a release.

Even with that gossamer thread to connect the parts into a whole, however, Mexican Gothic faces a difficult task to sew together these subgenres. It is not nearly as simple a task as Moreno-Garcia makes it seem. Her writing in Mexican Gothic is compulsively readable without sacrificing the sentence, which is an accomplishment in itself. Instead of stopping there, though, Moreno-Garcia turns this literary feat into a sort of genre glue, bringing together disparate subgenres in a way that makes them seem altogether suited for one another.

But then, if there is a problem with this novel it remains one of genre. Or a problem of two genres, specifically: historical fiction and paranormal romance.

The first fifty pages or so of Mexican Gothic position Noemí Taboada as the protagonist of a historical fiction novel (or an alternate history, in SFF parlance). She is a difficult protagonist. Initial descriptions of her are all about how she is exemplary of 1950s Mexico City socialites, rather than an actual 1950s Mexico City socialite. It isn't so much that she bucks against obvious systems of oppression as that she seems generally detached from the world while doing so. Once she shifts from exemplary socialite to amateur sleuth—and, specifically, an amateur sleuth in a British manor full of people who discourse on eugenics at the drop of a pin—this disconnection feels useful, even productive. But the beginning of the novel struggles and is only mostly sustained by Moreno-Garcia's propulsive writing.

My problem with the paranormal romance aspects of Mexican Gothic is a little more personal. I think there's a really interesting way to read this book through desire. I also think the semi-magical removal of consent that powers much of the book’s romance subplot is a thing that works for a lot of people, the vast majority of whom are not coming from a place of power or exploitation. I even think those sequences are largely well written, both in the same way the whole novel is and in terms of their restraint. I know, however, that that trope is super not for me. C'est la vie.

Unlike the masterful maneuvering between Gothic, Weird, mystery, and surrealism, the alternate history and paranormal romance elements never quite seem to gel into a whole. At their worst they feel like filler, sometimes even patronizing to the audience. At their best, they produce powerful images that remain disconnected from the broader picture—and that best is, like the rest of Mexican Gothic, very, very good. Phenomenal, even.

Instead of continuing in generalities, I'd like to take a closer look at three images. Consider this a hard spoiler warning with the hope that if I haven't convinced you to read this novel yet, what follows might.

For example, Moreno-Garcia manages to use the image of a bathtub to link the lack of control and direction experienced in a fog-shrouded graveyard to a corpse, screaming eternally, covered in mushrooms. She does this simply, through thematic resonance rather than any explicit connection.

First, the bathtub. In her dreams, Virgil Doyle—the elder brother of the family who owns the mansion, Catalina's husband, and the clear villain of the novel—approaches Noemí while her dream-self bathes. He taunts her with her desire and she finds herself unable to resist his advances as she is simultaneously overcome and repulsed by him. She wakes up, but there is a porous relationship between waking and dreams.

In an earlier scene, Noemí visits a graveyard, based on a cryptic note from her cousin. In classic supernatural fashion, on her arrival the air goes from mostly-clear to pea-soup-thick in an instant. A figure lingers in the fog until Francis—the youngest Doyle and budding romantic interest—emerges. He ultimately extricates Noemí from a situation out of which she is unable to help herself.

Finally, in the family crypt, Agnes Doyle—the patriarch and true villain Howard's first wife—is a mummy pinned to the wall by mushrooms, "like a monstrous Virgin in a cathedral of mycelium." Buried alive, her consciousness was consumed by fungus until they could themselves think, in a sense. It is the final moment of revelation.

The bathtub dream, the graveyard fog, and the crypt all link a character’s lack of control with desire. In the graveyard, there is that desire is for futurity (in a potential relationship) and safety; in the crypt it, is for power and longevity and service. In the bathtub, desire is a literal horniness. The lack of control in the graveyard and the bathtub is externalized onto the mushrooms. Agnes, at the extreme end, has been physically and mentally consumed by them. That consumption allows them a sort of sapience that they can project onto others, a power and an effect that the book calls “the gloom,” and which makes the dream in the bathtub superpositional, both real and false. And then there is the gloomy fog that descends on Noemí before Francis, who is out picking mushrooms, helps her navigate it. It also links with the mushrooms: in the graveyard Francis is picking them, while in the bathtub the superpositional quality of the dream—another kind of “gloom”—is the supernatural consciousness of the Agnes-mushroom hybrid seeping into the inhabitants of the High Place by way of consumption (both orally and respiratorily, by eating the whole or inhaling the spores).

It is a fairly short leap, I think, from these themes to some of the more explicit and political ones. Analyzing the social place of women in post-Revolutionary Mexico, or the eugenicist rot of the legacies of colonialism and Lovecraft, can be done without foregrounding control and desire, but not nearly as well as Moreno-Garcia has here.

While I find that literalization of explicit horniness unnecessary—the themes of control and desire elsewhere are subtle but not invisible—and kind of uncomfortable (though, again, well executed), the scene does allow for a kind of lever. The image of Noemí and Virgil at the bathtub itself stands out strongly enough that the reveal—that mushrooms who ate a dead lady are the source of ancestral memory and immortality—feels more materially consequential (or at least narratively coherent given the thematic groundwork). Which is why I say that I'm not entirely convinced that the genre problem is a real problem. The juxtaposition of paranormal romance tropes remains awkward, but they are also successfully deployed to bolster Mexican Gothic’s considerable strengths, which is part of the point.

It would be embarrassing to come out and say that I consider Mexican Gothic to be a perfect work of fiction. Having no problems with something doesn't necessarily equate to that. What I will say is that, in a certain mood, given the right interlocutors, I might just reach for that hyperbole and construct an argument around it. Because it’s damn close enough, as far as I’m concerned. It is phenomenal.

Plus, it ends with a mansion aflame, one of the iconic images of our time. That mansion burns through stolen consent and eugenics and Revolution and colonialism, through Lovecraftian legacies (the patriarch's name being Howard is no coincidence, I'm sure) and Victorian patriarchal standards. It's something to behold.

Like Loading...
© Copyright 2020 By: Bee Gabriel
About Bee Gabriel
Bee lives on Island Demeter, where they write, organize an annual videogame pop up and compilation, and cook. Support them on Patreon for access to a monthly cooking blog that tries to seriously tackle reproductive labor with recipes.
No comments yet. Be the first!