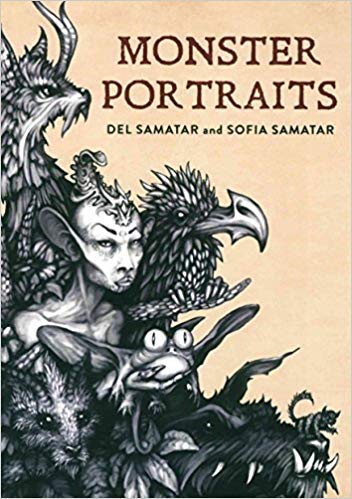 Think of a travel journal full of drawings from the field, and packed with meditations about what it means to be monstrous. Monster Portraits’ premise is that siblings Del and Sofia, artist and author respectively, travel out into an alternate world to discover monsters. They are traveling “separately, but over the same ground” (p. 2). In Del’s case he’s going to draw them, and in Sofia’s case she’s going to try to interview them. Of course this doesn’t always go according to plan: sometimes her subjects don’t show up, and sometimes she can’t get her questions out, but by and large she attempts to make contact with monsters. Through her notes she becomes the travel journal’s narrator.

Not only do we get drawings of and dialogue with the monsters, we also get brief descriptions of their surroundings. Sofia manages to add in startling, spare sentences of worldbuilding. Take “the bridge at Rokhod hovers on a plume of smoke” (p. 50) or “outside, saints fell from the trees” (p. 31). The story unfolds in an episodic way, although it does have a progression. Time passes unmarked, making it hard to tell how long each meeting lasts. There are no dates to these entries, no clocks or other time indicators. This fragmentation is clever and effective. It makes the world seem larger, since the distance travelled is unknown. For instance, the narrator attends a very dangerous wedding, and then some while later she is sitting in a cafe, interviewing a different monster in another location. How far away in time and space these two events are from one another remains unknown. It could have been a week, a month, a year between those encounters.

There is nothing seamless about Monster Portraits. Its form is a mosaic structure, consisting of quotations, academic theories, internet search results, episodic prose poems, and more. It is a hybrid work, weaving together languages and illustrations that contain textual elements. Opening the book does not yield a standard wall of prose; this is a different type of experience. And the book ends with seven pages of notes to index the references. All this variety serves a purpose, in that the form of the book mirrors the theme. As monsters defy easy labels, so the book defies one simple categorization.

What’s truly wonderful about this multiplicity, and what keeps me rereading the book, is that it’s a tool for thinking. The story and the drawings contain generative abundance. They interact in productive ways to raise questions about race, about language, and about sex and gender. The monstrous book is a hybrid of many things—reflecting the difficulties faced by its creators: namely, frustration with limiting racial, linguistic, and gendered categories.

From the start, the narrator begins to draw links between being monstrous and her mixed-heritage identity: “we go to school, where they ask, ‘are you black or white?’” (p. 15). Throughout the book there is a constant struggling with that feeling of being neither here nor there, neither one thing nor another. And the monsters themselves visually represent this identity struggle. Some have black skin but wear white masks. There is something viscerally wrong about the idea that blackness must be masked with whiteness. The image points to the “epidermal” character of racism, a state where black people are locked in blackness, and white people are locked in whiteness, and both are deformed by their view of the other (Frantz Fanon). One of the projects of the book is to push against such thinking. Through the narrator’s subsequent recollections, we learn that people of mixed heritage do not automatically have a comfortable place or name. They are called upon to explain themselves, to submit to others in a guessing-game of labels. They are a site of conflicting elements, “from the clan of immigrants and hyphens” (p. 23).

Yet the narrator also expresses the idea that what she’s doing might be suspect as well. She spends some time considering a book called Of Monsters and Marvels, complied by sixteenth-century French surgeon Ambroise Paré. He is described as a great collector, someone who made a catalogue in the pursuit of knowledge. Paré’s book contains a list of monster illustrations captioned as figures. Monster Portraits also captions its illustrations as figures, such as Figure 9: The Collector of Treasures (pp. 26–27).

In his desire to know monsters, Paré reduced them to entries like “FIGURE OF A VERY MONSTROUS ANIMAL THAT IS BORN IN AFRICA” (p. 28). The narrator expresses her fear that Paré would have liked her work (p. 28). She does not want to make his mistakes, to think of the monsters as specimens, to depersonalize them. Perhaps her efforts can become a revision of his, an act of inclusion rather than collection. On page 37, Sofia says, “I love the little glittering pages—the little glittering pages with no one missing.” Instead of Paré’s “accumulation of data,” the Samatars’ book becomes a gathering place, a way for monsters to exist together even though in the flesh they would not get along. This in turn could express a wish that humans could gather together, as members of one clan. But for many reasons, we cannot let go of our desire to call some people monsters. We are taught to think in categories that divide us.

Exile and outcast, foreigner and immigrant. What are you, if you do not conform to a culture’s normal? One aspect of conformity lies in speaking and reading the dominant language. Language becomes another way to draw a line between insider and outsider, normal and monstrous. Monster Portraits’ relationship of language to picture raises questions about why we prioritize what we do.

In addition to English, the book contains phrases in other tongues, including French, Spanish, and Arabic. Figure 16: The Doctor shows a dark man in a white mask, standing in front of a wall of illegible text. The script is crammed together in a manner so dense that the large rectangle resembles a topographical map. In Figure 19, the Scribes sit atop their columns, long papers unfurled like flags, lined with tiny letters. In every image something is talking that I don’t understand. Is it Arabic, or a fantasy script? The communication is visible but out of reach.

The book also explores an unresolved tension between pictorial and written communication, which has an element of the insider/outsider conflict. The pictures might be for anyone’s understanding but the letters are signs of a specific culture and alphabet. In Monster Portraits we have pictures that “speak” and text that is visible but evades legibility. To an outsider, language becomes decorative when one lacks the knowledge to decode it.

Language is one major way to sort people into groups. Native or non-native speaker, fluent or illiterate. Controlling the language can control the society. For example, why as Americans are we resistant to Spanish? Why do public schools offer Latin but not Arabic? Why is English our default? A dominant language like English helps us create conditions where native speakers have the advantage. Surely the fluent insider is accepted and valued more, automatically? I think Monster Portraits asks us to consider why we allow these categories and hierarchies to stand uncontested. Why do we prioritize things the way that we do?

The monstrous body upsets order and knocks over boundary markers. Yet, at the same time, the narrator tells us how monsters have extraordinary delicacy, how monstrosity is a fragile identity (p. 45). Another way of being monstrous in the world is being female (p. 22). Throughout the story, the female body is threatened, through mentions of rape and coercion. The narrator, resigned for the moment, says, “it’s the way things have always been, only now we see it more clearly” (p. 53). On the same page she gives us a brief memory, the tale of a dog that is trained to bite black people, a racist dog.

Rape is above all else a reinforcement of power, of the strong over the weak. A dog is taught racism, a woman’s body is threatened, power and ignorance conspire to do harm. I don’t think the juxtaposition of those images is accidental. To understand a little more about gender and sex among monsters, we can compare the accounts of two female monsters.

On page thirty-seven, the narrator introduces us to the Sexy Zebra. Part of the Zebra’s story involves seducing men and then trampling them to death under her hooves. In the drawing, the Zebra twists her body around in a sexualized pose, and she is nude. A perfect cliché of femme fatale. Sofia, now in her meta-role as author, explains that at first she wanted Zebra to be excluded from the book. Is she a figure of power? Only in such a way as comic-book women display power, in their physique. Sofia calls herself out for allowing this sexist depiction to be included. But then she excuses herself by reiterating that all monsters must be brought home. Even those that represent what she dislikes. The first purpose of her work is bringing together, more than evaluation.

Right after the Zebra, the narrator encounters another violent female monster. The Nanny is a nefarious force. In the illustration, we glimpse one eye in a patch of dark skin, peering out from behind a hole in the white mask. Nanny violates the order of things by killing the family she was meant to serve (p. 38). Human children have such a long period of infancy, where they are helpless and in the power of the mother figure. In this case, their surrogate mother is unrepentant. After killing those she was tasked with protecting, she gives herself a new pair of hands. So much for the concept that women are natural mothers and caregivers. Sofia’s fragmentary encounters give us room to consider, to ask ourselves what other sexist assumptions still have to die.

Monster Portraits excels at raising questions, pointing out contradictions and incongruences. Just a few of the assumptions it challenges include: English over other languages, whiteness over blackness, and manhood over womanhood. The narrator even questions her own conclusions, wondering, “Am I a monster, or is this just what it means to be a person?” (p. 45). Compelled to seek an answer, she must go on a journey of memory and intellectual discovery. For me, Monster Portraits never seems too brief or too compressed; rather, its sections feel expansive, as though there is so much more going on than what made it onto the page. So much more terrain that exists outside the margins.

Like Loading...
© Copyright 2019 By: Nicole E. Beck
About Nicole E. Beck
Nicole E. Beck's writing has appeared twice in print, as a long poem from dancing girl press and as a multi-genre chapbook from Red Bird Chapbooks. She studies art history with an eye towards more interdisciplinary work. Her most recent chapbook can be found here.
No comments yet. Be the first!