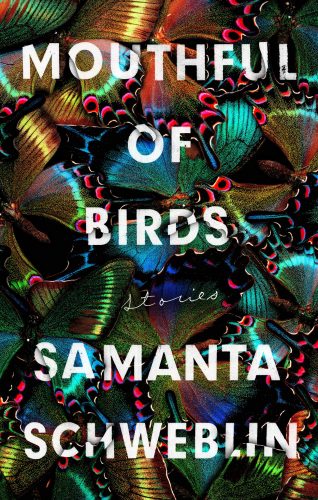 A short story is a dangerous thing, arguably more dangerous than a novel. A novel can transform one’s world, breaking and re-forming a reader’s perceptions in the process. A great novel can have all the sublime and transformative fury of an earthquake or a storm, building and raging, then departing and leaving the landscape of the imagination unrecognizable in its wake. But novels, even the most powerful, do this work over a span of days or hours and across hundreds of pages.

Compared to this, a well-crafted short story is a bullet or a bolt of lightning. It can be just as powerful as a great novel, but the best short stories compress that transformative force into pages, moving across a reader’s consciousness in a comparative instant.

In this analogy, Samanta Schweblin’s collection of short stories, Mouthful of Birds, is positively strobic—a series of bright, shattering strikes. Taking the lightning analogy further, reading Mouthful of Birds is akin to climbing a high, treeless hill under a sky bristling with electric clouds and putting up a metal pole. Several times through this collection I would put the book down at the conclusion of a story, blinking my eyes against the mental flash, the thunderclap of the story’s idea ringing in my ears.

The strength of Schweblin’s stories is that their strangeness and violence is not immediate. Schweblin’s language (and Megan McDowell’s masterful translation from the Spanish) is so spare, the delivery so confident, the exchanges so realistically laconic, that the weight of the stories takes you unaware. Even after I should have learned her trick, after reading several of these pieces, I continued to be caught off-guard by their thematic heft. Her stories often begin dreamlike or prosaic and so the themes of gender, reproduction, violence, or soft horror break on the reader with a sudden, artfully brutal force. (Art and brutality are a theme in Schweblin’s work, more on which below.)

The stories in this collection explore three broad categories: gender and reproduction, art and violence, and the uncanny or subtly off. By that last term I’m trying to get at something that leans toward the surreal, isn’t quite horror or fantasy, but fills the reader with a growing tension because something in the story isn’t quite right. In “The Digger,” for instance, the narrator comes to stay at a holiday estate and realizes that it comes with a mysterious man on the property, for which the narrator has some kind of responsibility, whose job consists solely of digging a hole. The narrator can’t understand why this is the case, nor can he get any additional information about the strange arrangement. Everyone else he interacts with seems to understand the arrangement, until the man begins to believe he must be insane for not understanding it himself. In another, “Olingiris,” an employee at an institute devoted to meticulously plucking the hairs from a perfectly silent female figure, reflects on her past and on the choices that brought her to his bizarre place.

One of the things I think Schweblin may be doing with this approach, in which there are details or aspects of a story that simply don’t make sense to the reader (and are not explicitly magical or unreal) but are assumed to make some kind of unknowable sense in the story, is contrasting these aspects of her stories with things that we do understand in the world but that should seem bizarre or meaningless. Let me try to explain this with two stories in this collection.

In “Irman,” two friends stop at a strangely abandoned roadside diner. They complain about the service and wander into the back to find a man named Irwin, whose wife (the owner) has just died. What follows is a bizarre conversation in which the visitors try to determine whether Irwin is developmentally disabled or simply in shock. Eventually their interaction morphs into a robbery as one of the characters decides to take advantage of the situation. I would say that the whole thing has a dream-like quality except for the continued realism of Schweblin’s prose. The surrealism comes only from what every reader has experienced herself: conversation that seems hopelessly off between people who find themselves in awkward situations. What “Irman” highlights, though, is the brutality of the everyday—the intersection of greed, death, alienation, miscommunication, and disinterest.

At the end of the story, the two men are chased out of the diner but not before one grabs what he believes to have been Irwin’s cashbox. Safe in their car and down the road, the thief bullies the narrator into opening it:

Oliver turned every once in a while to look at what I’d found. There was a name embossed on the underside of the lid; it said “Irman,” and beneath it was a photo of the short guy when he was very young, sitting on some suitcase in a terminal. He looked happy. I wondered who had taken the photo. There were also letters headed with his name: Dear Irman; Irman, my love; poems he had signed; a mint candy turned to dust; and a plastic medal for the best poet of the year with the logo of a social club.

“Is there money or not?”

Oliver grabbed the box from my hands and tossed it out the window.

“What are you doing?” I turned around a second to see the things scattered over the asphalt, the papers still in the air, the medal bouncing farther away.

And a while later:

And he shifted restlessly in his seat, as though he really did regret it. (pp. 72-73)

Besides the overall thematic strength of the story, its single-line conclusion highlights the layers Schweblin is able to work into her spare prose: regret over the character’s actions or at missing another turnoff for food?

“The Test” immediately follows “Irman” and provides a counterpoint. In this story, it’s not the brutality of the everyday (the ability of petty greed to shatter someone’s simple, ordered universe) that is explored but rather the everyday nature of an extraordinary brutality. In the story, the mafia is testing a man to see if he can be employed as a hitman. The test is whether he can take a stray dog to an unspecified location and bludgeon it to death without hesitation. If he does, he gets the job. The story is nothing more than the man’s attempt, but the account is told in such simple, straightforward description that its violence is all the more poignant. Whereas some authors (me) can’t write a line of action without meta-narrative spelling out what this or that action means or why it’s significant, Schweblin just paints the story in all the mundane details: the dog’s body, the streets of the city, the man’s simple uncertainty, the weight of the shovel, the heavy blows.

Which brings us nicely to the theme of brutality and violence, central to this work and especially in Schweblin’s explorations of the relationship between violence and art. I’m uncertain if the juxtaposition of violence and visual art is a bit of self-deprecation (poking fun at herself for stories like “The Test”?) or a critique of high art culture or both. The final story in the volume, “The Heavy Suitcase of Benavides,” is the best example of this.

Benavides, a sad, confused man akin to Irman, murders his wife and stuffs her body in a suitcase. Then he panics and takes it to the home of his psychiatrist, where he confesses. His psychiatrist, an art critic, interprets the suitcase as a work of art. Benavides becomes more and more agitated in his attempts to claim responsibility and receive punishment, while the suitcase is turned into an exhibit in the psychiatrist’s garage and all of Benavides’s protests are seen as the work of the eccentric genius artist. It’s not that he isn’t believed; it’s simply that the murder doesn’t matter in the pursuit of the art.

The story concludes with the opening of the exhibition:

Benavides turns toward the curtain, and then back toward the audience. There is a thrilling silence. Then Benavides takes the microphone and says:

The message takes time to sink in. Once the audience processes the words and understands their meaning, they start slowly to applaud, moved. Euphoria breaks out. He says he killed her, they say to one another. Now, that is intense, they comment. Pure poetry, shouts someone in the back. The evening’s first tears of emotion fall. (pp. 226-227)

There’s a similar theme at work in “Heads Against Concrete,” which features Schweblin’s most sympathetic character, a sociopath who has learned to control his violent impulses by painting them on enormous canvases. These paintings of vivid brutality have gained him fame and fortune. When a dentist wants an ultra-realistic painting of teeth for his office, the reader sees the protagonist’s view of what the chance for real friendship looks like to him. When the dentist misunderstands and gets instead a painting of brutal murder featuring teeth, the reader sees the main character’s confusion at this reaction, his hurt, and his attempts to make things right—which of course invariably result in actual heads against concrete. There’s a pathos, a real sympathy with the sociopath’s confused frustration, but again there’s also the sharp focus on graphic violence (always primarily left to the reader’s imagination) as a form of art.

I’m not sure if Schweblin is critiquing or playing along. She has created stories for readers who want their short fiction to be an experience—visceral and troubling—and yet also bear thematic weight in terms of the issues they tackle. Most of her stories do both of these extremely well, such as the first story in the collection, “Headlights,” which takes place in a weird desert landscape and explores issues of gender and abandonment, or “On the Steppe,” a soft horror that involves an infertile couple’s desire for children.

Comparisons with the magical realism of Borges or Márquez are perhaps inevitable (the butterflies on the cover of this beautiful edition probably aren’t helping there), but these comparisons wouldn’t get at the real emotive force of Schweblin’s work. Schweblin has no trouble playing the magical realism game, and playing it very well, but her magic has a force that can wrench and wreck just as easily as it can mystify and charm. Where a Borges short fiction reads to me like puzzling out a riddle while wandering a lovely labyrinth, Schweblin’s riddles strike with the force of blunt objects.

Like Loading...
© Copyright 2020 By: Stephen Case
About Stephen Case
Stephen holds a PhD in the history and philosophy of science and teaches at a liberal arts college in Illinois. His fiction has appeared in Beneath Ceaseless Skies, Orson Scott Card’s Intergalactic Medicine Show, Shimmer, and Daily Science Fiction. His first novel, First Fleet, is a Lovecraftian SF epic available from Axiomatic Publishing. Find him online at www.stephenrcase.com.
No comments yet. Be the first!