Reviews
Size / / /
Not So Good a Gay Man by Frank M. Robinson
By: Redfern Jon Barrett 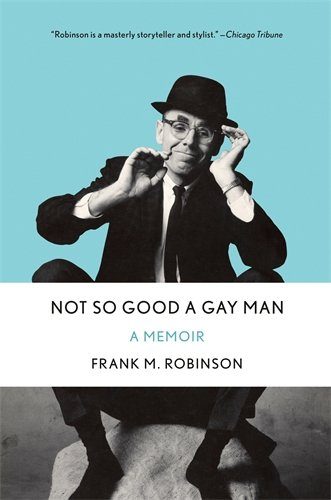 It’s common for queer people to feel lost. As a millennial living in Berlin, it’s easy to meet people isolated by days-long parties and heady consumption, and even the most progressive LGBTQ scenes play host to despair and suicide. I’ve listened to tale after tale of those who’ve woken up one day only to realise they never see their closest friends outside of nightclubs, and that despite spending huge amounts of time in ostensibly queer spaces, they don’t feel connected to anyone. This is not a new complaint: it’s one which spans generations.

There’s no single solution to this problem, but stories can grant us community. We see ourselves reflected in tales from our LGBTQ forebears, and being exposed to the personal trauma of events which they experienced allows us to see how our own lives fit the collective record. Tor’s release of the late Frank M. Robinson’s memoir Not So Good a Gay Man promises an important addition to this narrative, covering the author’s life all the way from the 1920s to the 2010s. As such, I hoped for an account which furthers our understanding of modern queer history, while maybe providing that all-important sense of connection.

On the surface, Not So Good a Gay Man holds a great deal of promise: Robinson not only had a successful and lengthy career as a science fiction writer, but he also put his services to use as a speechwriter for Harvey Milk. My high expectations were encouraged by accounts of the author’s Depression-era childhood, and the queer adults surrounding him as a child—which he recollects with an entertainingly dry wit. Unfortunately, the memoir’s first disappointments present themselves as the author reaches adulthood.

Despite the title, this is not really a book about Frank M. Robinson, the gay man. Instead it is a book about Frank M. Robinson, the writer. Now this shouldn’t necessarily be an issue—in fact, this angle fascinated me at first. We still live in a world which sidelines LGBTQ authors and their fiction, so I could scarcely imagine what challenges presented themselves seven decades ago. The problem is that Robinson is not a passionate writer. In fact, in this memoir he openly admits that he doesn’t enjoy writing at all. Throughout his life he only did so sporadically, normally with the promise of significant financial reward. As he remarks on a friend’s invitation to collaborate on The Glass Inferno (later made into the 1974 film, The Towering Inferno): “I had been in the business long enough to know when an idea smelled of money.”

Robinson was paid handsomely for stories he wrote apathetically and which borderline-plagiarised the work of others. These financial rewards didn’t bestow themselves upon him because he was especially lucky, nor because he was a good writer—in fact, the memoir itself attests to his poor style. Not So Good a Gay Man is an incredibly disjointed read, full of awkward phrasing and rambling repetition. Sentences like “There was the faint air of carnival in the air” are depressingly common.

This leaves some awkward questions. Why would we want to read a writer’s memoir when its author didn’t enjoy writing? And if Robinson was so poor at his craft, why did he do so well?

If we want to understand Robinson and his accomplishments we need to talk about that dreaded term, “privilege.” In fact, we can’t avoid it: privilege seeps through every page of this memoir. It’s impossible to avoid the glaringly obvious fact that Robinson was a well-connected white man who lived through an era in which being a well-connected white man was the most important qualification for any career. Despite the book’s title his sexual orientation isn’t really an issue: he makes clear that he spent most of his writing career in the closet, even spending years working on a competitor to Playboy. This could have formed an interesting narrative had Robinson recognised his position and attempted to surround it with some sort of critical commentary, but unfortunately he demonstrates little sense of his own entitlement. When describing women he invariably focuses on their physical attributes, often with insulting and degrading language: “On the way to Frisco for a friend, we picked up a Mexican whore. She was dumpy and weathered... ”

This leaves us with a tribute to what was essentially a boy’s club—men getting prestigious writing positions simply because they knew other well-placed men. In fact, Not So Good a Gay Man revels in the world of straight white patriarchy, and as a result the memoir name-drops with great frequency: from continuous hero-worshipping references to Hugh Hefner, on to Bob Dylan, Prince Andrew, Robert Heinlein, Arthur C. Clarke, Alan Watts, and Francis Ford Coppola. It’s not that Robinson knew any of them particularly well, nor that they add anything to the narrative. He just wants to let reader know they were part of his network, because that’s how he measures success.

Just in case my references to privilege haven’t already outraged enough people, I now have to talk about Kevin Spacey. While at a party in 1986, a closeted twenty-six-year-old Spacey allegedly groped the unwilling fourteen-year-old actor Anthony Rapp. This accusation sparked outrage when it came to light in October 2017, with almost universal condemnation directed toward the prospect of an older man taking advantage of a vulnerable adolescent. Spacey took the opportunity to come out, only to provoke further horror—the closet was no excuse.

I wish this was a random non sequitur with no relevance to this review, but unfortunately similar scenarios occur over and over throughout Not So Good a Gay Man. Many of the gay men Robinson spent time with were older and quite wealthy, and their sex lives consisted of exploiting teenage boys who were lost, hungry, and had nowhere else to stay. One friend of Robinson’s, for instance, captured huge photo collections of under-age boys, which he subsequently showed to the leering author. Another regularly hosted pool parties filled with mostly naked teenagers.

Again, a different commentary surrounding these scenes could have provided interesting insights into the cruel and coercive culture which surrounded this stratum of rich gay men. But by this point Robinson’s detached dry wit has begun to come across as sociopathic, and he never seems to comprehend the scale of any wrongdoing. Worse, he took part himself—and as if to ferment his hypocrisy, Robinson complains about impoverished young people stealing in order to eat. This history is absolutely shameful—bringing to light how class and power can undermine any notion of queer solidarity—yet it’s never really questioned nor overtly condemned.

All of this is a monumental shame, as there are some good moments in Not So Good a Gay Man: the memoir’s later sections where Robinson details his (limited) involvement with Harvey Milk and the impact of the AIDS crisis are interesting, heartfelt, and all too brief. There’s a strong story lurking beneath the tedious privilege and teen exploitation, but that’s hardly a high compliment. In fact I feel dirty just typing that sentence.

This review opened with literature’s potential to connect otherwise isolated young queers, but those are exactly the people exploited by Robinson and his privileged compatriots throughout this book. Yet I still believe in the power of stories to provide us with a sense of community. In that vein I strongly recommend reading Martin Duberman’s excellent account of the Stonewall riots, or Lost Prophet, John D’Emilio’s biography on civil rights activist Bayard Rustin (an important historical figure who more than deserves our attention). We have a rich history, and thankfully there’s no shortage of passionate LGBTQ role models who maintain both dignity and integrity. As for this book, I’m putting it mildly when I say that Not So Good a Gay Man is not so good a gay memoir.

Like Loading...
© Copyright 2018 By: Redfern Jon Barrett
About Redfern Jon Barrett
Redfern is a writer and polyamory rights campaigner, armed with a doctorate in queer literature. They are author to novels The Giddy Death of the Gays & the Strange Demise of Straights (finalist for the 2016 Bisexual Book Awards) and Forget Yourself. They currently live in Berlin. Read more at redjon.com.
No comments yet. Be the first!