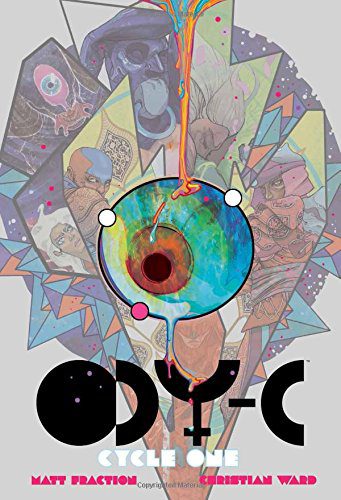 Last Christmas I found a hardcover omnibus edition of the graphic novel The Incal waiting beneath the tree. Reading it, I was treated to a week or so of psychedelic science fiction that in style and content informed design and sensibility of the genre far beyond comics in the ’80s and ’90s, from Aliens to Tron to The Fifth Element. I was pleased to find this Christmas tradition continued this year with another epic graphic novel, this one equally gorgeous and in a way even more ambitious than Jodorowsky’s seminal work.

ODY-C: Cycle One, written by Matt Fraction with art by Christian Ward, is described on the back cover as "a trippy, gender-flipped version of Homer’s Odyssey hurtling through space on psychedelic, science fiction wings." An essay by classicist Dani Colman at the volume’s conclusion gives a better description: "ODY-C is less a gender-bent Odyssey than it is an Odyssey-flavored gender pretzel."

Certainly gender is at the heart of this incredibly beautiful, epic, graphic, and bloody retelling of Odysseus’s voyage home against a science-fantasy background. Its cosmic scope and artistic sensibility make it in some ways similar to the latest Sandman collection, though it tends toward brighter, sharper depictions than Milton’s watercolors and features the Olympians instead of Gaiman’s metaphysical archetypes. But the gender play is what makes this work truly remarkable. It is incredibly clever, built into the mythological backstory, and provides a vantage to see this ancient story through a surreal and effective new lens.

In the universe Fraction and Ward create, Zeus is female. Hundreds of generations before this story begins, she grew angry at her children’s constant maneuverings for power. Because offspring created such trouble, Zeus decided to solve the problem in suitable omnipotent fashion: by erasing all men from existence, destroying the entire gender and with it the dangers of procreation. In response to a flatlining population, the Promethean figure in this reality stole not fire but sex from the gods, creating a new gender: the sebex. Zeus had forbidden males but not sex; the sebex allowed goddesses and mortals to once again have (female) children. In this universe, the cause of the Trojan War becomes the fact that the first male in thousands of years is born to Zeus and Leda. The man, referred to simply as He, is married off to Queen Ene (Menelaus) of Achaea but stolen away to Troiia by Paris. Thus the face that launched a thousand starships and began a century-long war waged by legions of warrior women is the face of a man.

This hardcover collection contains issues one through twelve of the series and begins with the departure of three ships from fallen Troiia after the final victory of the Achaeans: the swiftships of Odyssia, Ene, and Gamem (Agamemnon). From the title ODY-C: Cycle One and from the pictograph on the back cover, I assumed this volume would chronicle Odyssia’s voyage back to Ithicaa where her wife and their child Telem (who is without explanation revealed to be a male) wait. For the first half of the volume, that is indeed what we get, in glorious art and numbered lines that echo Homer’s original but are translated into the language of high science fantasy. This works to great effect in the early portions of the story, where Ward’s art fuses with Fraction’s prose to represent the technology of Odyssia’s ship, the Ody-C, and marry high technology with plenty of seafaring metaphors.

Meanwhile within the Ody-C’s hull the whole mandala busts into life.

as the Ody-C wanders amok on Poseidon’s breath.

Between episodes of the ship’s progress are frequent interruptions showing the machinations of the Olympian goddesses (gorgeously and bizarrely reimagined in altered-gender forms) both during and following the Troiian war. Besides filling in backstory, these interruptions highlight the poetry of Odyssia’s narrative (and its nature as a destiny manipulated by the goddesses) by setting it against the lack of poetic form in the dialogues between divine beings. The conversations of the goddesses seem rough and jarring, harsh and elemental against the poetic flow of the Ody-C’s voyage.

The work made me want to brush up on my knowledge of Homer’s original. We follow Odyssia in the first six issues through familiar episodes like the Cyclops and the lotus-eaters, all with a polychromatic science-fantasy sheen that makes the work iridescent. But there are also scenes I don’t recall from Homer that are either new elaborations on the tale or aspects of the story so transformed as to not be immediately recognizable. My disappointment, though, was that ODY-C is not self-contained. We leave Odyssia at a cliffhanger halfway through the volume, and the second half is dedicated to following Ene and Gamem on their respective voyages.

Gamem’s issues push the remarkable style of the volume to its extreme. In a short, vivid, and gruesome two-part episode we get the twisted background of the House of Atreides (the original children of Atreus, not the House from Dune of the same name), the vengeful murder of Gamem, and the setup for a retelling of the Oresteia to parallel Odyssia’s journey. The narration in these issues is composed entirely of limericks, providing a lighthearted awkwardness that makes the twisted violence even sharper. (And, if you recall the Oresteia, you know exactly how twisted its setup becomes.)

Later of course, all this shit just got worse

Remember, this bloodline is totally cursed

Led a third one to slaughter

Because this shit’s super perverse.

It’s a history of murder with conspicuous gaps

But the punchline’s the same dumb old crap.

In the remaining space of the volume, Ward and Fraction have even more room to play as they follow the return voyage of Ene and the captured He, characters (as Menelaus and Helen) who don’t have much of a mythical history after leaving Troiia/Troy. With this narrative freedom, Ward and Fraction set up a situation in which Hev—no longer a slave but unsure what freedom means—finds for the first time friendship with a young boy in a hidden city of men. The city, however, has a gruesome curse. Like the caliph-husband in the Arabian Nights, the city’s twin kings each evening together take a bride or groom from the youth of the city and murder them after consummating their marriage, reenacting like Scheherazade’s husband a grim vengeance over and over.

Here the work plays most explicitly with themes recurring throughout the work: sex, dominance, rape, violence, and their consequences. From the lips of broken and vengeful goddesses (in stories told by He) the moral is that “Boys who rape shall all be destroyed”—a plea for justice that rings true for He and the boy but seems strange in a wider universe lacking men and in which there is still no lack of rape, especially by Zeus herself. Yet this makes He’s response to his situation all the more poignant: when his friend the boy is taken to wed the kings, He attempts neither an impossible rescue nor a futile exercise of power. (He has none.) Nor does He offer himself in the boy’s place.

This is where the gender-bending in ODY-C is most powerful. He has been the most sought-after sexual prize in a universe of women. Now He is forced to wear a mask due to the scars Ene gave him for his rebellion, and He is lost and unremarkable in a city full of men. While Ene and Odyssia fight and kill on their quests to return home, He is forgotten. He becomes the caretaker of a young boy, but He can do nothing to actually protect the boy against the kings of the city. Instead, He simply asks to join him, suffer with him, and not be forced to leave the side of someone who for the first time has given him real friendship. There is no ending here that’s not grim and abusive, but in the night (after He and the boy have been raped but before they will be killed) there is time for stories. And like Scheherazade, stories may keep them alive for another day and perhaps do more than that—give them hope and meaning in the midst of brutality.

Let my tale be a warning: sure as blood shall be all our undoing, it is stories that set us all free.

The stories are all that matter.

The universe laid out throughout ODY-C, naked and bleeding in pictures and prose, is beautiful and profane. In this it is like the characters it contains, filled with wonder and violence and sex all the way to the top, to the forms of the goddesses themselves. But that’s the point: and it is what makes this a faithful (though reinvented) representation of the original, a taste of the agony and the grandeur of the Greek epics. More than just another reinterpretation, the gender-twisting, poetry, and art of ODY-C make the old stories come to life by forcing the reader to see them in ways strange and beautiful enough to recapture some of that original strangeness and beauty with which they surely struck their first listeners.

Like Loading...
© Copyright 2017 By: Stephen Case
About Stephen Case
Stephen holds a PhD in the history and philosophy of science and teaches at a liberal arts college in Illinois. His fiction has appeared in Beneath Ceaseless Skies, Orson Scott Card’s Intergalactic Medicine Show, Shimmer, and Daily Science Fiction. His first novel, First Fleet, is a Lovecraftian SF epic available from Axiomatic Publishing. Find him online at www.stephenrcase.com.
One comment on “ODY-C: Cycle One by Matt Fraction and Christian Ward”
Strange Horizons - 2017 in Review Part One By Our Reviewers

[…] of this comic series). It features poetry and tragedy and spaceships, and I wrote a review of it here. Epic only just begins to describe it. The third was a book I discovered this year at a used book […]