Reviews
Size / / /
Patricia A. McKillip and the Art of Fantasy World-Building by Audrey Isabel Taylor
By: Aaron Heil 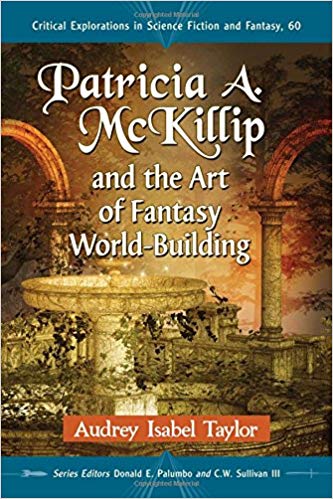 After generations of literary scorn, I had the luck of getting my undergraduate degree during an era that actually smiled upon courses studying speculative fiction. Much of the analysis I read concerned itself either with “escapism” or “worldbuilding.” Speculative fiction had clawed its way into competition for serious criticism via a fancy method called worldbuilding, or alternatively “world-building.” However, as far as I recall, none of the research into this area that I read mentioned Patricia A. McKillip, something which inspired Audrey Isabel Taylor to examine the work of that prolific and award-winning writer further. The legacy described in Patricia A. McKillip and the Art of Fantasy World-Building largely concerns McKillip’s understated mastery of this crucial element of the genre, and Taylor’s analysis pays special attention to her ability to consistently build believable worlds with enough room for characters to entangle themselves in intricate and engaging conflicts.

Taylor’s examination of a selection of McKillip’s novels begins with a definition of “world-building” as a kind of process. Taylor argues that world-building goes beyond mere setting, including such concepts as character gender, age, and the attitudes each character takes toward the world. Though in the past I have always seen this term spelled “worldbuilding,” as one word, Taylor asserts that the hyphenated version emphasizes that the process occurs not only within the world, but in the characters’ heads, as well. Speculative fiction, by definition, offers the audience elements that require imaginative expansion of the world as we know it, but “world-building” emphasises the additional task of imagining how such an entire speculative society affects the people who live in it. Any examination of world-building hinges on the peculiar fact that lots of fans read speculative fiction to learn of worlds that do not exist anywhere else. Rather than decrying world-building as an accessory to “escapism,” however, Taylor argues that McKillip draws on past genre conventions and provides stories that question traditional roles. Genre convention allows for familiar ground for the reader and creates narrative tools. Having established convention, further world-building within the familiar holds an important role, not only for the creator but also for the audience reading the work.

Since readers new to McKillip’s work likely have familiarity with the speculative genre, Taylor’s definition of the role of world-building within the fiction operates against the context of larger genre studies. Much critical study of speculative fiction has begun to form around world-building—but most often, Taylor alleges, with regard to Tolkien. While Taylor appreciates the pioneering work done by Tolkien, she presents the case that McKillip has written a lot of award-winning work and received comparatively little attention. McKillip has been nominated for a Hugo and won Mythopoeic, World Fantasy, and Locus Awards, yet has received little study by the academic world. In addition to her ability to subtly challenge expectations within her world-building, McKillip, an American woman, defies assertion that the genre belongs to a European man. She also published in the 1970s and 80s, just after the revival of Tolkien in the eye of popular culture. Rejecting claims that speculative worlds avoid allegory and bias, the conflicts within McKillip’s characters challenge many long-time assumptions about the speculative genre.

While McKillip does regularly create medieval-inspired fantasy worlds, then, Taylor points out that she consistently subverts expectations as well. McKillip’s world-building in particular challenges assumptions related to gender and age, pastoral and urban settings within the speculative world. Rather than making an ostentatious show of subversion, McKillip works her rebellions in subtler ways, often disguising them in either meta-humor or a false figure in the novel who resembles a trope played straight. She does so by creating an enveloping world, often filled with riddles, in which her characters must survive. However, McKillip mostly works independently of herself, creating a brand-new world in most of the novels surveyed by Taylor. Taylor draws examples spanning McKillip’s entire career, from her early days creating the Riddlemaster Trilogy (1976-79) to her latest, Kingfisher (2016). By choosing samples from four decades, McKillip’s versatility becomes apparent as she builds worlds for almost every one of them, each of which tackles and confronts her characters. It also displays the wide-ranging popularity of McKillip’s novels and provides a strong argument for her scholarship.

Building a new world every time allows for audiences to become enthralled, in part explaining the wide-ranging popularity of McKillip’s novels, but it also clears the slate for characters to grow and change as the world comes to life within the reader’s imagination. Two character traits which Taylor chooses to focus on in her review of McKillip’s novels include gender and age. McKillip breaks down the traditional roles of princesses, heroes, and witches repeatedly in her body of work. Both the hero and princess tropes concern youth and its associated vitality, but also the fragility. Dashing heroes fail and need rescuing by their princesses. Other times youthful characters appear helpless before their predicament and need elderly guidance. Since the elders in McKillip’s work have largely won their wisdom through hard-fought knowledge, we can consider them as intricately designed pieces of world-building themselves.

Indeed, McKillip’s aged characters often drive the plot of her books, based on their greater knowledge and more complicated viewpoints. From the duelling elder stateswomen grappling for power in Ombria in Shadow (2002) to McKillip’s Baba Yaga-inspired woodland witches, Taylor observes that McKillip can world-build within character relationships to create more complicated feelings toward her worlds’ settings. However, McKillip’s aged characters often face limitations. An elderly character can act just as foolishly and faces more physical limitations than a youthful one; while age does present advantages, Taylor’s treatment of McKillip’s elderly characters show that all individuals must adapt to the world around them and learn to grow within its confines.

While Taylor makes it clear that world-building involves character interaction as well as physical space, McKillip does employ setting so strongly that it cannot be excluded from the analysis. In fact, setting proves to be the most crucial part of her exploration of world-building—though it often adheres most seriously to speculative genre conventions. McKillip frequently presents pastoral images for her characters to wander dream-like through, but she chooses to explore the mystery of why they remain rather than extolling their virtues like many speculative writers. McKillip presents magical woodlands as places of strangeness and danger. Only characters who master them can world-build enough to meaningfully fulfill their quests. Cities present similar perils, through which young heroes often rely on older mentors to guide them. Additionally, McKillip’s cities present the complication of having already been world-built themselves. In the ultimate culmination of world-building, youthful heroes must learn to make their ways in speculative lands, acting on the previous encounters of characters who influenced and affected the city. Cities present their own culture, and so present an instance of world-building acting upon itself, since they are ultimately combinations of the actions of several characters. Taylor’s decision to end her analysis at cities, then, especially evidences the cascading properties of world-building, flowing from the characters of the stories long past embedded in McKillip’s novels, all the way down to her readership.

By presenting how a layered work of fiction contains within itself characters shifting and learning about the world as readers do, Taylor paints McKillip as a master world-builder. McKillip’s long career has gone overlooked by literary analysis for years, and Taylor provides an encouraging start to opening her worlds up for further inspection. In defining world-building as a process more than as a mere technique, Taylor shows how McKillip’s skill at a narrative level provides opportunities for closer treatment of her subject matter. This matters greatly in a genre that relies heavily on convention to communicate to readers, but also offers plenty of room for subversion.

Taylor’s analysis of McKillip shows the ways that good world-building can lead the reader to witness characters developing and attempting to adjust to impossible worlds. McKillip chooses in particular to discuss the gender roles of her characters, as well as roles and challenges brought on by their ages. She chooses to do so in familiar settings—the pastoral landscape and the busy city—which require characters to develop and grow in order to survive. By presenting a career characterised by masterful usage of one of the genre’s signature techniques, Taylor presents a case not for further study of McKillip, but of the whole body of speculative literature.

Like Loading...
© Copyright 2019 By: Aaron Heil
About Aaron Heil
Aaron Heil lives with his wife in Emporia, Kansas, where he is an MLS candidate at Emporia State’s School of Library and Information Management. His prose has also appeared in The Cleveland Review of Books, Corvus Review, and elsewhere. He regularly blogs for The Game of Nerds.
No comments yet. Be the first!