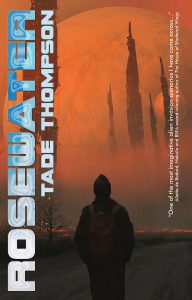 A map is cleverly encoded in the opening paragraph of Rosewater, Tade Thompson’s near future novel of mind-readers and aliens. In symbols and signs, the paragraph tells the reader where the book is going and the paths it will travel. It begins with a surge of anxiety: ''It's how I usually start my day,'' says the narrator. ''This time it's because of a wedding and a final exam. Not my wedding, not my exam'' (p. 1). Wedding, exam, and anxiety all belong to customers of Integrity Bank, going about their business fifteen floors below the narrator and his colleagues. The novel soon explains why the narrator experiences the anxiety of bank customers he doesn't know, but it would be a mistake to move too quickly past this moment of blurred boundaries, this anxiety that both is and is not the narrator's. There is a distinction that is easy to miss by turning the page too quickly. After all, it's common to feel anxious for someone else—while listening to a friend talk about their own anxiety, or while watching a character in a movie, or while reading a book. But experiencing anxiety in sympathy with someone else is not the same as actually experiencing someone else's anxiety. Imagine it for a moment. What would it mean for your identity to have an experience that is not yours? Who are you if, however fleetingly, you are also someone else?

Blurred identities and blurred boundaries are packed into many of the scenes in Rosewater, along with interrogations, government secrets, explosions, and aliens ranging from the carnivorous to the fungal. The narrator, whose name is Kaaro, spends his days protecting bank customers from being mined for information by "sensitives," who, like him, can read minds. He also uses his mind-reading ability at his other job, conducting interrogations for a secret branch of the Nigerian government. The narrative soon takes off on two parallel mysteries, alternating between the year 2066, in which sensitives like Kaaro are getting sick for an unknown reason, and the year 2055, in which a younger Kaaro tries to find Oyin Da, also known as Bicycle Girl, a woman who is part urban myth and part political activist. By the end of the novel, past and present converge on the mysterious glowing dome in the middle of the city of Rosewater, and the alien known as Wormwood.

There is enough action in the plot to encourage reading at a quick clip, to find out what happens next or what new creation is waiting in the next chapter. The narration encourages a quick pace as well. Both the younger and older versions of Kaaro are not given to long bouts of self-reflection. The younger Kaaro is a selfish, misogynistic man, focused on his own desires for money, sex, and (when things get bad) his own survival. The older Kaaro narrates with a distance reminiscent of a cynical detective, jaded by the horrors of the world and his own part in them. Early on we see this side of him in more detail when he describes an interrogation, treating the subject of the interrogation as a puzzle to be solved. He doesn't know why the man is being interrogated. He doesn’t know what the government wants with the man. He is completely, deliberately distanced from the process:

I don't like interrogations, but I'm good at them. I feel proud of myself when I solve a puzzle, and then I feel disgust. I try to think of myself as a lawyer, operating within certain parameters that do not include morality. Focus on the task. (p. 14)

"Focus on the task," Kaaro reminds himself, and so he does, breaking into the man's mind inch by inch. He sets aside disgust and wraps himself in amorality as best he can.

Given that amorality, it's unsurprisingly uncomfortable to spend time within Kaaro's perspective. Neither hero nor villain, he often makes wrong or imperfect decisions, hurting others and himself as much through inaction as action. For this reader at least, that discomfort became a distraction on my first read of the novel. The misogyny and selfishness of the younger Kaaro blended with the cynicism and detachment of the older, making it difficult to tell their stories apart, though their alternating chapters are clearly marked. The younger Kaaro in particular kept me on edge, to the point that I felt a palpable sense of relief in the moments when his misogyny and selfishness are called out. My second read of the novel was much more fruitful. I began to recognize the distinctions Thompson draws between younger and older, and the lines that connect one to the other—how, for example, the arguments which the older, jaded Kaaro has with his government handler are an empty echo of the arguments the younger, selfish Kaaro has when he first meets her. I noticed the character’s changes, as well, as the younger Kaaro is pushed more and more to look outside of himself and the older Kaaro is pushed to take on at least a small stake in the world.

A second read also revealed layers of image and resonance, like the map I mentioned encoded in the opening paragraph. The elements of that paragraph—Kaaro's borrowed anxiety, the city streets he observes, and a skylight above him—are little gifts to discover when you already know what happens next.

As described above, the map begins with Kaaro's anxiety, which is a sign for the mind-reading so integral to the rest of the book. This mind-reading is a particular feat of imagination on Thompson’s part. For Kaaro, it first appears as an ability to find things, which he makes use of as a thief:

I find [my aunt's] gold and diamonds in a box under the carpet in a false floor. I know the key is on her dresser hiding in plain sight. I know my uncle has thousands of dollars in cash in the ceiling space. I also know they have a vermin problem and that he is worried about rats eating the cash. I take an indeterminate wad of cash and stick it in my waistband, then I take a golden crucifix from the jewellery stash. I know, in the same transcendental way, when my cousin Eliza is about to come looking for me. I know when and where to hide from her to avoid discovery. (p. 36)

Initially, Kaaro experiences mind-reading as knowledge without a clear source. He simply knows where the gold and diamonds are, and where the cash is hidden, and when his cousin will come. His mind-reading ability doesn’t take on its full shape until he receives training from Section 45, the secret branch of the Nigerian government that employs him. Through training, he and the other sensitives learn how to enter into a kind of psychic landscape called the xenosphere.

I use "landscape" as a descriptor deliberately—the xenosphere includes more than verbal thoughts. Sensitives appear in this psychic space as a mental embodiment of themselves, and they can travel through it, visiting the minds of others. Actions in the xenosphere have a dream-like resonance, but they also have very real implications for physical and mental health. For Kaaro, adventures in the xenosphere often carry a direct threat to his sense of identity. A striking example is in the first “Interlude,” one of the occasional scenes of his government work, inserted between the numbered chapters. In this first interlude, he falls so deeply into the interrogation of a subject that he believes that he himself has committed the crime, ultimately losing nine months of his life to hospitalization and treatment.

Of course, in the opening paragraph, all of this is yet to come. For now, mind-reading is just a mundane fact of life for Kaaro, mentioned briefly and then set aside as he moves on to a second integral part of the novel. The city.

In my seat by the window I can see, but not hear, the city. This high above Rosewater everything seems orderly. Blocks, roads, streets, traffic curving sluggishly around the dome. (p. 1)

The city of Rosewater is as essential to the book as mind-reading and the xenosphere. It is another character in the novel, the blocks, roads, and streets described in its pages with careful detail. Though it seems orderly from fifteen floors above, up close there are robots built in India, carnivorous aliens, reanimated corpses, drones and cyborg hawks, people who pretend to be machines, a friendly stray dog named Yaro, the Section 45 office hidden within a building belonging to the Ministry of Agriculture, people on pilgrimage from all parts of the world, and a mayor who has figured out how to make money off those pilgrims. And at the center of all this—by which I mean the center of both the city and the book—is the dome, Utopicity, which Kaaro and the reader spiral ever towards.

The opening paragraph ends on a subtler note. Kaaro shifts his observation from the city to the sky, specifically the open skylight above him. The skylight is important for two reasons. First, he and his colleagues, all sensitives, are far above the city, at the very top of the Integrity Bank building. As Kaaro will be reminded again and again, other people don’t trust sensitives and don't like them. He is often kept at a distance, separated from other people by windows and screens, his internal detachment emphasized by the outer world. The skylight is also important for a more familiar reason: "The climate in the room is controlled despite the open skylight, a waste of energy for which Integrity Bank is fined weekly. They are willing to take the expense" (p. 1). In 2066, like 2017, those with money still pay to get away with whatever they can. Kaaro will confront this reality in multiple ways, as his city and world are manipulated by those with more knowledge and deeper resources.

These, then, are some of the essential layers of Rosewater, laid out in the first paragraph: mind-reading and the blurring of identity that comes from experiencing feelings and memories not your own, the city of Rosewater and the secret at its center, and the pressures exerted by those with more power and resources. There is all this and more—I haven't talked about Thompson's inventive aliens and realistic-feeling invasion, his keen observations of how easily people ignore and accept what should be terrifying, the intriguing characters (many of them women) who have lives of their own beyond the pages of Kaaro's perspective, the fascinating isolation of the United States, or the lived-in feel of Rosewater, Lagos, and the other places described. I haven't talked about survival, and its limits. "We live our lives" (p. 287), says Kaaro, and it's almost more than he can hope for.

Like Loading...
© Copyright 2017 By: Sessily Watt
About Sessily Watt
Sessily Watt endeavors to embrace uncertainty and the limits of her own knowledge. She often fails, and tries to embrace that failure as well. Her writing has appeared in NonBinary Review and Bookslut. You can find her at sessilywatt.weebly.com and on Twitter as @SessilyWatt.
No comments yet. Be the first!