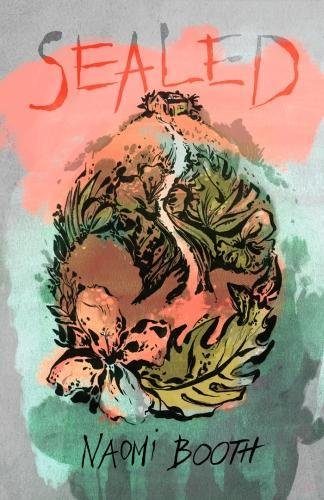 Naomi Booth’s Sealed has a slow build towards what makes the book truly a horror novel. Body horror and near-future devastating climate change are only hinted at in the book’s early pages, as is the main character’s potential unreliability as a narrator. But by the end of the book, each of these aspects has moved from subtle to brutal.

Alice, our first-person narrator, is struggling with depression after the loss of a beloved parent, while also trying to do the right thing for the new life she is bringing into an increasingly dangerous world. She’s taking a break from her professional life with city housing services for reasons that are vague at first but become increasingly important to our understanding of her character, moving to a small remote town to start over. Throw on top of that a tenuous-at-best relationship with her boyfriend, Pete, who is a bit of a jerk and also the father of the baby she’s carrying, and you’ve got a character rife with conflict, at odds with most of the world around her.

Alice’s fears about the world into which she’s bringing a child are the everyday fears most of us face, but especially new parents: are the chemicals in the products we use slowly killing us and irreparably harming the environment? And if they are, is there anything that can be done at this point, or are we stuck with new health defects and a natural world slowly limiting where it’s safe for humans to live? The near-future time-frame of Sealed, and the signs of imminent environmental collapse that surround Alice, only make these questions more pertinent. But asking these questions, refusing to live with blinders on as her boyfriend and new neighbors seem intent on doing, and then having her interpretation of the answers, and in fact the validity of her research, questioned by everyone around her quickly escalates Alice’s concerns into full-on panic attacks.

I think that, as readers, we are meant to question Alice’s trustworthiness as a narrator. From the very first words of the novel (“We came out here to begin again. We came out here for clean air and a fresh start. No one said to us: beware of fresh starts. No one said to us: god knows what will begin”), Alice questions her own ability to rationally assess the situation surrounding her. From the smallest detail (whether Pete is remembering to buy “protected source” food and household products) to the largest (whether the town they’ve moved to, Lakoomba, is really as deserted as it seems to be), she questions everything. And since the book is written in the first-person, the reader is provided no opportunity to gain outside confirmation that Alice is in fact not paranoid or delusional. I, personally, think she’s not over-reacting at all and that all of the other characters are being intentionally oblivious, especially Pete—but your mileage may vary. Deciding Alice really is right doesn’t negate the fact that the tone of the book invites the reader to question her in the first place.

The other characters question Alice as well, most especially her boyfriend. Alice’s life-long relationship with Pete, from childhood playmates to adult lovers, is very clearly one of repeated convenience: he’s a good-ole-boy, insecure enough to over-act the part every time he meets new people, who can’t quite reconcile himself to monogamy. Alice is more of a trophy to him than a real partner, but she can’t quite ever help herself from falling back in with him. Their relationship is contentious, but it’s easier for Alice to go along than to walk away completely (despite her previous attempts to do exactly that). It is Pete’s treatment of Alice, coupled with his painfully awkward way of interacting with their new neighbors, that is instrumental in my feeling that Alice is not just being paranoid: when the significant other in a main character’s life is very clearly downplaying her concerns to the point of gaslighting, the reader is more likely to think the main character is in the right. Alice’s new friend Mara, who is a recently-new mother herself of toddler Iluka, is the one voice around Alice that doesn’t immediately put her down. Mara does her best to calm Alice’s fears of impending motherhood without negating them. No surprise that it is ultimately Mara who comes to Alice’s rescue more than once as the book progresses.

Alice’s internal solitude is mirrored by her surroundings. The world-building here is wonderful: just developed enough to understand how the world has changed between our present and the indeterminate time of the novel, but not so much that it detracts from the focus on character. Lakoomba is a small town on the verge of both economic and environmental collapse, and the details Booth chooses to share bring to mind a very clear image of similar small towns in the present day. Having just recently seen the third season of Netflix’s Stranger Things, I couldn’t help but picture that nearly-deserted Main Street as I read the Lakoomba scenes of Sealed. But most of the book takes place in Alice and Pete’s recently purchased house on the outskirts of town, sans phone and internet hook-ups, which brings with it a feeling of claustrophobia and insularity—Alice and Pete have neighbors within walking distance, but they’re the type that don’t want to interact with anyone (for reasons, of course).

The growing environmental threat comes to a head at the end of the book, combining with the other main thread of horror: the new skin disease that the authorities are downplaying but that Alice is hyper-aware of. The disease, and how it plays into the final act of the book, is sure to interest fans of body horror: it causes rapid and inexplicable growth of new skin layers over the body’s openings: eyes, ears, and nostrils of course—but you can imagine, given the main character is late-term pregnant, where things progress. Descriptions of the disease’s effect become more detailed as the book moves into its final scenes. But where does the disease come from? Why doesn’t the government seem to be doing more about it? These questions are sort-of answered (some more so than others) in the many flashbacks to Alice’s past. And if there’s any negative to the storytelling, it’s the way those flashbacks slow down a story that is already strong on the slow-build. I’m glad the author included details on the titular disease and the way in which Alice became so hyper-aware of it.

But I also feel that, when combined with the flashbacks to Alice and Pete’s relationship history, we almost get too many retrospective scenes. They’re a bit too repetitive and it almost felt as if the author really wanted to write Alice at the center of a medical-political thriller at the same time as she wanted to write a story of a woman isolated and at odds with her own body. The two threads don’t meld quite as well as they could. When Sealed works, however—in Alice’s internal conflict, her contentious relationship with Pete, the world-building, and the gruesome body-horror—it works very well, and I can recommend it on the strength of those aspects.