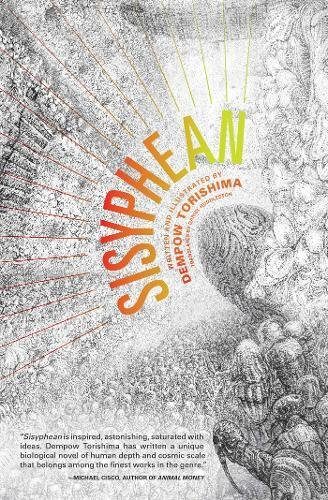 Who will recall the pleasures of monotony? With an increase in scientific knowledge, will human beings emancipate themselves from the restrictions of the flesh, cease to be mere biological organisms, and even move beyond the material world? For the past half century, transhumanists have seen technology as a means to enhance the human intellect and physiology; to help us transcend our current form and realize our true potential. But what if all this ends not in emancipation, but, spiraling out of our hands, brings about utter ruination? How will our political systems respond to these changes? If it’s the world of Dempow Torishima’s Sisyphean—where genetic engineering corporations have become organisms capable of subsuming entire worlds and life-forms—that the often conceited stance of transhumanism might lead us to, then it’s a course we ought to be wary of taking.

In “Sisyphean (OR, Perfect Attendants),” the titular story, the “worker” (who cannot figure out where he came from, which memories are his, how he ended up at his workplace, or what purpose his boss the “President” might serve) finds himself toiling endlessly at a company set atop an isolated platform in the middle of a sea. The worker pieces together human bodies which are in turn sold to clients who fit their life forms into the manufactured bodies. Utilizing elements from body horror, the worker’s story depicts the inability of a sentient being to escape the physical and emotional degradations of workplace hierarchy. As worried and confused as the worker might be about what his origins are, the harrowing experiences of the workplace are always closer to hand and the President’s requirements need to be met with first. The first story therefore sustains the basic premise and synopsis of the book very well—irrespective of the fact that “human” bodies hardly bear any resemblance to what we know of them, the drudgery and horrors of daily life remain the same, even increase in manifold ways.

Tied in with this examination of workplace politics and hierarchies in the first story is the worker’s struggle in understanding and explaining the origin of his life form, a theme that runs throughout the book and connects seemingly disparate stories. In the second story, “Caumville (or, The City in the Hollow),” we meet a taxonomy student Hanishibe who attempts to understand how lives in Caumville are resuscitated, and what happens in the “Heretofore” and “Hereafter.” “Caumville” is a tale of a society in disorder and chaos, and Hanishibe’s struggles in understanding what led his world to where it is; but as individuals try to learn and discover the origins of their world, upending of power structures and political struggles occur, and the general malaise that underlies Caumville’s social setup is uncovered. Like “Sisyphean,” “Caumville” is a seemingly alien, but deeply human tale. How societies collectively respond to the questions surrounding evolution, how established power structures rest on preconceived notions of the nature of being, and the unease that follows the discovery of our own origins—these are issues that mankind has always struggled with.  The third story, “Castellum Natatorius (Or, The Castle in the Mudsea),” similarly describes the challenges and ridicule with which new theories of evolution are often met:

The proxy of Archlearner Maruba had been in attendance from the Ministry of Welfare Contemplation, and brandishing his precious Speciation Hypothesis, he had pompously declared namas-machina to be an anthropoid species and claimed that any and all use of them as food was illegal. It was a rather unrealistic assertion.

“After all, he’s saying that lower gloambugs—even the sickos that externally fertilize eggs—are related to humans.” (p. 178)

A central theme, as mentioned earlier, therefore connects Sisyphean to questions of our own world: just as Darwin’s work once undermined the certitude of man being made in God’s own image, of being at the centre of the universe, opened up the possibility that we are instead the result of indifferent physical and natural forces, and thus made this sanctuary untenable; so each of the stories in Sisyphean examines how communities are thrust into uncertainty as they learn the true nature of their origins.

But at the heart of this might be a deeper, sinister plot. Each story is divided and introduced using page-long fragments that provide some context for the story that follows. In the prologue, for example, we are told that two corporatians are dictating the lives of the communities in each of the stories, and that the quest for understanding their origins might as well be meaningless:

… in the midst of the unnatural equilibrium maintained within their incorporeated system, subordinapes dictated from life-forms sampled on countless worlds toiled each according to the standards of the corporatian to whom he belonged. They formed a vast, multifaceted ecosystem, wherein cycles of death and rebirth were repeated endlessly. (p. 1)

Torishima’s writing is dense and each page is saturated with information—the density of the book demands the reader’s undivided attention, and a few moments of wavering will result in entire worlds of meaning being lost—but he astonishingly manages to avoid writing expository prose. The details of this bizarre world—islands built on dead bodies of sea animals, tunnels made of the detritus of discarded goods, cities set in underground funnels, sentient “castellae” that move through the expanse of a giant “Mudsea”—are vividly described:

The atmosphere, created through a combination of Torishima’s prose and worldbuilding in these stories, is always distressing: the worker is stuck in a constricting and suffocating workplace; Hanishibe’s city is an underground funnel, at the depths of which filth has accumulated over the years. Even the world of the final story “Peregrinating Anima (or, Momonji Caravan),” where the protagonist Urami joins a caravan moving through open landscapes in their quest to understand the calamity that has befallen them, feels constricting.

The distressing atmosphere notwithstanding, descriptions of daily lives and usage of various items thrown throughout the book are a treat to read. Take, for instance, this passage on writing using insects from “Castellum Natatorius”:

Scentences were written with secretions that came from the anuses of blotterbugs. When you gripped one of their elastic, spindle-shaped bodies, the neurofungi living inside would react, stimulating the creature’s glands. When using such an instrument, concentration was a must; otherwise, you’d end up rattling on and on about things that were self-evident or slip off into a kind of automatic writing that would just be all over the place. (p. 172)

Sisyphean is not, however, without its shortcomings. There are a few snatches of over-writing, and the prose often becomes opaque. Torishima’s book is not an easy read, and it may be that not everyone will agree with my reading of it; the idiosyncratic language and invented words often make it a task to read through it. Even so, the narrative is almost always hypnotic and enigmatic; Daniel Huddleston’s translation feels seamless, effortlessly evoking the dread and horror of Torishima’s bizarre and grotesque world; and the brilliance of the writing in the original Japanese can be guessed at. Despite these few flaws, Sisyphean deserves attention as a brilliantly inventive work of science fiction, and one hopes that it will be recognized amongst the best the genre has to offer.