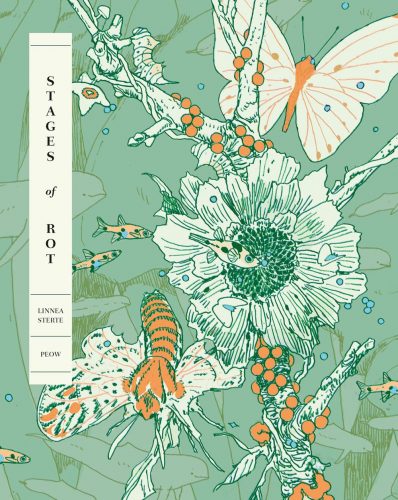 Stages of Rot is a graphic novel that pushes the idea of a visual story told through sequential panels almost to its limit. Which is to say: the book is almost entirely pictures, with barely any text at all. Swedish artist Linnea Sterte’s dreamy, loose landscapes and muted, dark colors flow from page to page, telling a single story in five chapters. The plot, inasmuch as the story conforms to a coherent plot, starts with the body of a wounded, bleeding giant whale and the rare textual introduction:

The cause of her death: we might never know for certain. Too many years have passed. Was she hunted—if so, by what?

We then dive into the first chapter, which deals with the “flesh-eaters,” a group of warriors with spears, led by a shaman, who venture into the body of the whale to “bring back the flesh of her heart.” Instead, they encounter the whale’s “pilot,” a ghostly, pale figure, “the size of a grown woman.” One of the warriors stabs the pilot, presumably killing her, and the raiding party leaves, each warrior’s uniform covered in blood, carrying away their prize.

The second part deals with the “bone-cutters.” The whale’s carcass has begun to grow mold, giving way to new life in the form of mushrooms and green moss. The color palette changes to muted green and pale brown, instead of the red and blue of the previous chapter. In this one, a father cuts whale bones into beautiful shapes for his child, toys that are a reflection of the whale’s memories. The child eats the newly grown mold, fascinated by the small, carved bones.

The third chapter deals with the “barbarians.” By this point, the whale’s carcass has turned into a skeleton, and the landscape has turned back into violence. The colors are red and dark blue, and a group of warriors ride their beasts through an arid landscape, swords in hand, to raid what looks like a monastery. The nuns at the monastery get wind of this from hummingbirds, which push their beaks into the nuns’ foreheads in a special place, to share the memories of what they’ve seen.

The nuns release giant caterpillars from a secret holding place and watch as the caterpillars cover the entire monastery in a thick cocoon; the raiders arrive, but find their swords are unable to damage it. After a while, the caterpillars emerge from the cocoon as giant butterflies, bigger than the warriors and their steeds put together, and destroy the raiders. Once the battle is over, the nuns emerge from their secret hiding place, the same spot previously occupied by the caterpillars, and leave to start a new monastery somewhere else. Before they leave, one of them plants seeds in the ground.

The fourth chapter is about “the entomologist.” Now the landscape is lush with greenery, the frames bursting with leaves and flowers and branches, insects and other animals on every corner. “This is the rot at its finest,” a caption tells us. This section is the first to feature recognizably modern, “realistic” humans, who look like ordinary twentieth-century characters and not people from a distant planet or a magical land. Every frame is simply different shades of green, and several men are traveling through the landscape, looking for someone they refer to only as “her.” Finally they think they’ve found her—in the amygdala of the dead whale there is a cyst, and they plan to cut down the trees and access it.

“Who knows?” answers another. “Would you rather she be left unseen?”

This marks the ending of the lush, green stage, as the events of the next chapter take place post-demolition. The colors switch back to muted red, dark blue, and dusty yellow. Walking through the now exposed ruins of the whale carcass, a man finds a skeleton, with a spear apparently sticking out of it. He bends down to kiss the skull, and immediately large spiders descend to weave the skeleton back to life, turning the pilot back into a woman.

The man takes the pilot back to a large, industrialized city, where the same symbols used by the nuns abound. He takes her into a large hall that looks like it was meant for exhibition—which is also the name of this final chapter. The hall is decorated with dead versions of the life outside—insects and animals are displayed on wires, adorning the walls, there to be examined by the onlookers.

The pilot herself is escorted to her place, sitting on a pedestal, holding the spear she was killed with, wrapped in the clothes given to her by the man. The crowd looks at her, the men discuss her like an inanimate object, describing her as a wild thing who’s lived a complicated life out in the wilderness.

But then a loud noise pierces the room, the same noise that appears at the very beginning of the book, when the flesh-eaters first ventured into the whale’s body. The pilot looks up at the ceiling and walks away from her throne, preparing to take to the skies and shatter the glass on her way.

The man looks bewildered at this.

“It was kind of you, waking me up,” the pilot says.

“You can talk?” the man wonders, “No, tell me, where did you come from? And why are you shaped like that—like a woman?”

“Oh,” the pilot says, already leaping into the air, “I wouldn’t know.”

In the sky, she finds a new giant whale and slowly crawls inside of it through its eyes, using the iris like a door.

The most interesting thing about the story is that everything you just read, the plot summary I just laid out for you, is completely open to interpretation. Sterte’s world is so rich with odd detail, so devoid of textual description, someone else could have written a summary that would have sounded almost nothing like mine.

For example, the book is full of landscapes and creatures that are not just fantastical but deliberately mix together worlds or ecologies familiar to us. From red blood cells floating through the air, caught by children on their tongues, like snowflakes, to the air being filled with fish and other sea creatures, to strange, fantastical beings mixed in with all of this.

It’s for this reason that I hesitate to give a deeper analysis of Sterte’s work. It begs you to look with your own eyes, consume everything on the page and draw your own conclusions based on what speaks to you, what you personally deem important.

For me, one of the story’s most interesting aspects was its portrayals of gender in the different societies in each chapter, its subtle fluidity, the different body types on the page. But then, the arguable protagonist of the piece seemingly addresses this herself in the final chapter. When asked why she’s shaped like a woman, she answers that she doesn’t know, and goes on to find a new sky-whale. To me, it felt like Sterte was asking me not to draw too many conclusions, not to try and subject the book to one particular narrative.

Stages of Rot is beautiful in precisely the way the title implies. It’s full of the beauty of decay, destruction, resurrection. It’s destruction and death and violence but also hope and life and awakening. Its muted colors and detailed, disciplined lines take the reader from story to story, from one fantastical setting to another. For SF/F fans, I think it offers a truly unusual look at totally visual worldbuilding and storytelling. Reading the book is almost like sinking into a fever dream, with a languid but rising pitch, where the familiar will be remixed and the fantastical will be added, and you’re not quite sure how you’ll emerge in the end.

Like Loading...
© Copyright 2019 By: Marina Berlin
About Marina Berlin
Marina Berlin grew up speaking three languages in a coastal city far, far away. She’s an author of short stories who’s currently working on her first novel. You can follow her exploits on Twitter @berlin_marina or read more about her work at marinaberlin.org.
No comments yet. Be the first!