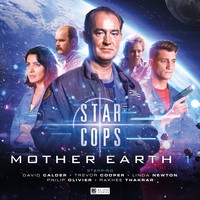 The four-episode audio drama collection, Star Cops: Mother Earth Part 1, from Britain’s Big Finish Productions is both the beginning of a new, full cast, audio-only series, and part of the increasingly popular trend of resurrecting old programmes with much of their original cast, TV having seen recent revivals of The X-Files, Arrested Development, and Twin Peaks, among others. In addition to various original productions, Big Finish has built a sizeable stable of audio adventure series by reviving old TV series, starting with their flagship Doctor Who line. Some of their series reunite the original casts, while others reboot or reimagine the property entirely. Still, at first blush, the British TV series Star Cops might seem like an odd candidate for a revival. Originally airing in 1987, it only ran for nine episodes. Yet the TV series kind of stuck in my mind—favourably, that is—more so than a lot of other ill-fated SF series long since relegated to the haunted space graveyard of cancelled shows. And the fact that Big Finish has latched onto it some three decades later suggests I wasn’t alone.

Created by Chris Boucher, Star Cops was essentially an attempt to create a kind of “adult” SF series, as well as a hybrid of crime drama and hard science fiction (possibly the first, pre-dating Space Precinct, TekWar, and other crime/SF mashups that come to mind). Set in the near future (no aliens or warp drives), and never straying too far from Earth’s gravitational pull, Star Cops envisioned an increasingly populated Moon and an array of artificial space stations that required an active police force to maintain law and order in the “High Frontier.” International in personnel and jurisdiction, their investigations took them as often to different countries as to orbiting satellites (an awkward aspect to the TV series was a tendency to paint countries in terms of cultural stereotypes; although I did wonder at the time if that was a knowing wink at the way SF is prone to depicting alien races, only applying it to humans). Despite some teething pains, Star Cops emerged as a promising effort. It had some of the coolest zero gravity scenes I’d seen to that point on a TV budget, and was held together by series star David Calder’s quiet charisma.

Now after some three decades the series has returned as an audio drama, with Calder once more in the centre seat as lead copper, Nathan Spring. And with a mix of returning faces—well, voices—such as Trevor Cooper as the boorish but (mostly) well-meaning Colin Devis and Linda Newton as the brash Aussie, Pal Kenzy, and new ones including Philip Olivier (Paul Bailey), Rakhee Thakrar (Priya Basu), and Nimmy March (as their political overseer, Shayla Moss). Olivier and Thakrar are no strangers to Big Finish listeners through the company’s Doctor Who range, with Olivier having played Companion Hex to Sylvester McCoy’s Doctor and Thakrar recently being paired with Paul McGann’s Doctor.

And the result, so far, is quite good.

Conceptually the creators have wisely elected not to overplay the nostalgia card, recognizing the vast majority of potential listeners might never have even heard of the original TV series, let alone seen an episode. If you are familiar with the old series, it will seem pleasingly evocative. But if you aren’t—it really doesn’t matter because you could drop in and not necessarily realize this is a continuation from some old property. (One change is that Big Finish has dropped the original theme song [“It Won’t Be Easy,” written by Justin Hayward of the Moody Blues], a tune that apparently wasn’t particularly popular with some fans, or with Boucher himself. Although I rather liked it. But I also enjoyed the Star Trek: Enterprise theme, so maybe I just have a weakness for soft rock sci-fi theme songs.)

And taken for what it is, putting nostalgia aside, this is a well-mounted production. Audio dramas can vary in style and professionalism, from plucky amateur productions to those boasting top-tier movie and TV stars; some are forced to record the actors separately (often leading to a slight stiffness in the scenes), while other productions can bring their casts together, allowing for more naturalistic performances; some are essentially like stage plays, others more like movies, with rich ambient sounds and music scores.

As with the majority of their productions, Big Finish’s Star Cops is very much an audio motion picture, with music, ambient sounds, and the actors recording together, resulting in good performances and interplay, both in terms of how the actors take to the voice-only format, and how easily they slip back into characters they haven’t played in over a generation (or slip into their roles in the case of the new cast). Calder is no stranger to audio productions (Dixon of Dock Green, Scarlet on Black, Alpha, to name but a few), so it’s unsurprising that he sounds comfortable. And he remains, as in the TV series, an effective, anchoring presence as the fundamentally decent, level-headed Nathan. Cooper’s performance is so effortlessly casual you can easily see him wandering corridors in costume, forgetting he’s actually just speaking his lines into a microphone, script in hand. And as mentioned previously, some of the newer cast members are already part of the Big Finish audio drama “family.”

The characters and their interplay with each other add immeasurably to making this a proper series, where you enjoy the plots and the personalities in equal measure. It is an ensemble, so each of the main characters gets their moment, and their storyline, and each as written and performed is up to the task. The characters are well drawn, having distinct personalities without sliding into broad caricatures. Thakrar’s Basu is a civilian medic and former part-time Star Cop thrust into the role of full-time senior officer, at times trying to act more confident than she perhaps feels about her new authority. Olivier’s Bailey is the ex-undercover cop, a bit rough around the edges and given a contemporary spin by being gay (a particularly nicely written/performed scene comes in an episode where we hear Bailey going through the mental process of becoming his undercover identity). Cooper’s Devis is still the boorish, old-school, politically incorrect cop (while also providing the stories with some of their comic relief)—but cleverly, the new series plays with the idea that Devis is genuinely trying to adjust to the new social dynamics, rather than making him some paean to bullish intransigency. Newton’s Kenzy appears only sporadically in these episodes—Newton being based in Australia, Big Finish wasn’t at first sure of her availability, but apparently she’ll be more of a regular in the next batch of episodes.

The scenes and storytelling are clear enough to follow—for the most part. Knowing there are readers out there who might be skeptical of an audio/radio play, but curious, it’s worth considering a production from the point of view of someone not wholly familiar with the format. And I do think Star Cops succeeds as a surprisingly solid introduction to the medium. The crime drama element means the plot beats are familiar enough, and the SF is just fantastical enough that it can exploit the “limitless” special f/x of an audio-only presentation while being just down-to-earth enough that it doesn’t veer off into hard-to-picture scenes (some of Big Finish’s Doctor Who plays can end in a lot of shouting and weird sounds that might tax the imagination). Probably the most conceptually challenging sequence is the climax of the fourth episode, involving runaway space stations and a daring mid-space rescue reminiscent of The Martian.

Featuring original, all-new stories written variously by Andrew Smith, Ian Potter, Christopher Hatherall, and Guy Adams, all directed by Helen Goldwyn, this initial set of four hour-long episodes (available as a boxed CD set or straight download) presents a decent gamut of stories, from murder mysteries, to undercover thrillers, to a kind of “bottle” show with the characters trapped in a building during a security conference. Threaded through is a subplot involving an anti-space terrorism group, the eponymous Mother Earth.

As an SF police drama these episodes maintain the police drama/procedural feel while never losing sight of the fact that the science fiction element and extra-planetary environment should be integral to shaping the plots (unlike some SF/cop show hybrids over the years which can just feel like generic cop drama plots only with ray guns). So an episode about drug smuggling is given an SF spin by the nature of the contraband itself, while in another episode one of the puzzles provided by a dead body found on the lunar landscape is how the killer got away without leaving footprints in the lunar dust. And the fact that this boxed set is labelled Part One shouldn’t discourage the curious. The collection doesn’t end on a cliff-hanger. Mother Earth remains a threat, but the four episodes here can be enjoyed for themselves alone.

As a longtime listener of audio dramas, I have a general appreciation of Big Finish’s efforts (while acknowledging they can have their ups and downs, like any production house), and their Star Cops revival emerges as being among their strongest, most sure-footed endeavours right out of the gate.

Of course science fiction is a peculiar genre when it comes to weathering the test of time—especially “near future” SF. Watching the 1970 post-apocalyptic thriller,The Omega Man is as much about the past as the future, with streets lined by big '70s-era cars, and movie theatres playing Woodstock. And all those 1980s cyberpunk movies with their punk rock-inspired future fashions seem almost quaint now. The original Star Cops TV series seemed fairly ensconced in the Cold War era, with American and Russian characters prominent. Those characters are gone from this audio version (albeit as much due to the actors’ unavailability—and mortality—as any creative decision). And with the centring of a terrorist group as the recurring Big Bad, Big Finish may have decided terrorism was a more relevant threat for this 2018 revival. However, since actors’ voices don’t age as obviously as their bodies, we can infer these audio episodes are supposed to be set only a few years after the TV series, not a few decades.

In some ways the world has actually started to catch up with the old series. Nathan’s hand-held, borderline AI computer (dubbed “Box,” and also voiced by Calder) was arguably the show’s main concession to outlandish sci-fi gadgetry. But now in this era of cell phone computers, the internet, and voice-responsive computer systems, Box seems just slightly more sophisticated than the sort of technology that already exists.

Much more ironically, the whole ambience of the series has been subtly altered by the passage of time. When originally conceived in the 1980s, Star Cops was intended as a gritty, semi-plausible extrapolation into the future—the antithesis of the Star Trek/Star Wars space fantasy. But cynically, one might argue this envisioned future of outer space development and international cooperation seems further away than ever as we instead worry about global warming, the erosion of international alliances, and even the breakdown of democracy.

Maybe that’s actually part of the appeal of this Star Cops revival. It now offers its own welcome escape into an optimistic future (or even a parallel reality). Tomorrow may still be rife with organized crime, corruption, and terrorism, Star Cops seems to say—but ultimately humanity will be okay.

Like Loading...
© Copyright 2019 By: D. K. Latta
About D. K. Latta
D.K. Latta writes SF & Fantasy stories as well as reviews & essays about books, audio dramas, graphic novels, and Canadian film & TV. Books include a collection of his Canadian film/TV essays and anthologies imagining a decades-spanning Canadian superhero universe. He has a day job, obviously. More on his writings can be found at  http://www.pulpanddagger.com/dk_latta.html
No comments yet. Be the first!