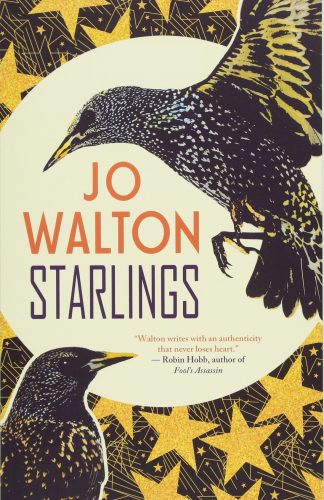 Everyone seems to have one of those drawers around the house that catches things. In my house we call ours, perhaps unfairly, the “junk drawer.” It’s the drawer in the kitchen where you go to find the Scotch tape, pencils, and tape measure but also keys that have lost their locks, refrigerator magnets of uncertain origin, twist-ties, rubber bands, and other assorted treasures.

Writers have junk drawers too. Having now published nearly thirty short stories, I am coming to suspect that even the most structured and orderly writers are all a bit like magpies in this sense. We collect bright and lovely odds and ends, edges of ideas, pretty words. We have electronic drawers (nests?) littered with them, and we hope to one day turn them into stories or perhaps even books. But that’s always the trouble—transforming them from a collection of bright angles, perspectives, or visions into actual narratives.

Jo Walton, the author of thirteen novels and winner of a host of awards including the Hugo, Nebula, and Locus, discusses this challenge in the introduction to her collection, Starlings, recently released by Tachyon Publications. But as early as that introduction readers are faced with a quandary: is it a collection of short stories, a writer’s drawer of odds and ends, or something else entirely?

I’m not sure Walton actually knows. In the first sentence of the introduction, for example, she calls Starlings a short story collection, but then, after revealing her secret to writing short stories (more on which below), she admits the book consists rather of “two short stories that I wrote after I knew what I was doing, two I wrote before I knew what I was doing, some exercises, some extended jokes, some first chapters of books I didn’t write, some poems with the line breaks taken out, a play, and some poems with the line breaks left in” (p. 19).

What is a reader to make of this? A cynical one might suspect this odd assemblage is simply a means of getting Walton’s name on another (very lovely) cover. Tachyon has a recent history of publishing similar volumes with other prolific, well-respected authors from whom most readers would be happy to see more work (such as their recent volumes by Peter S. Beagle, Jane Yolen, and Ellen Klages) even if that work is a collection of odds, ends, and unfinished business. And there’s an additional reason a work like this is welcome, another way of looking at it: as a sort of writing masterclass or behind-the-scenes look at crafting fiction. When a writer like Walton takes the time to open her junk drawer and offer insights on the bits and bobs found within, it’s certainly worth taking note and paying attention. One of the things I especially appreciate about the collections published by Tachyon of late, including this one, is the author notes provided on each piece, which offer chances to both connect with authors as practicing writers, as well as gain insights on the practice of their craft.

Viewed through this lens, Walton’s insights come as early as the introduction, where she lets us in on what she says is the secret to writing short stories, a secret she did not learn until after she had published nine novels. The key to short stories, she explains, is the weight of the story’s ending. The heft of the resolution tells the writer whether what comes before should become a novel or remain a short story. Following from this initial premise, the rest of the collection provides glimpses of where Walton has and has not been successful in putting this insight into effect, though there is disappointingly little self-reflection on how this played out in the creation of each piece. Before I flesh this out, though, let me take a moment to highlight some of the strengths of the best pieces in this collection.

Starlings opens with “Three Twilight Tales,” a trio of rich, interwoven sketches of a fantasy village and the lives that intersect there. In her notes on this tale, Walton explains the importance of tone to her writing. Though little in particular happens in these three interlocking pieces, the detail and description make them read like especially lovely prose poems. There are lines, for instance, about the evening sky, “when the last of the rose has faded into the west, and the amethyst of the sky … is beginning to ravel away into night and let the first stars rub through” (p. 25); or about a wandering peddler whose “words were ever truths shot through with sparkling lies, but his joy in their effect was as real as hot crusty bread on a cold morning” (p. 26). Lines like these have everything and nothing to do with the story—nothing in terms of the plot but everything in the sense of adding to the tone and mood of the piece, which focuses on the sleepy feel of the village, the sense that there are a thousand stories waiting to be told, and that subtle magic that pervades the surroundings.

There are other wonderful pieces in the collection as well. Walton shows she can step effortlessly from fantasy to science fiction in “The Panda Coin,” an effective day-in-the-life story set on a diverse and startlingly realized space station. The narrative follows a single coin as it passes through different strata of society, ultimately reaching the mysterious AI controlling the station. “Turnover” is another bit that shows how quickly Walton can sketch a compelling environment in space: here Walton transfers a slice of Renaissance Florence into a giant generational starship, and the reader joins a satisfyingly timeless dinner conversation between a group of humanists (artists, geniuses, and engineers) as they discuss how they can provide their descendants with as many options as possible when their ship arrives at its planetary destination several generations hence. As it progresses, the piece seems to be building to considerable stakes: the characters are going to have to begin a revolution or perhaps seize control of the ship. Yet the crisis is resolved before the final course of their meal is finished.

One could argue that these are set pieces or sketches rather than stories, but they feel capable of standing on their own. There are also, however—as Walton signals in the introduction—works that she has clearly left unfinished. “On the Wall,” for example, is a compelling first chapter of a retelling of Snow White from the perspective of the mirror. In the notes on this story, Walton says that her great insight was “that you don’t need the novel” and admits continuing beyond the first chapter didn’t feel necessary once she realized Robin McKinley was already doing fairy tale retellings (p. 58). In this particular instance, that explanation works because we all know the story of Snow White and can extrapolate beyond this first chapter. Indeed, it’s that lingering extrapolation in the reader’s mind that perhaps lends this piece greater effectiveness.

But that kind of explanation doesn’t work for a piece like “Relentlessly Mundane,” which in some respects was the most intriguing “beginning” in the whole collection. It picks up with a cast of characters who are trying to continue life after having returned from years in a magical realm—something along the lines of what a modern-day Peter, Edmund, Susan, and Lucy would have faced upon their first return from Narnia. The characters can’t help contrasting their life here with what they had known before, and the reader gets bits of what this entailed, hints of a previous epic, through allusions they drop in conversation. But before the story picks up and does anything with this concept, it’s over. Or rather, Walton makes it clear that it continues, but she hasn’t written it and “couldn’t possibly” write it (p. 102).

In one respect, it is comforting to know that even very successful writers come up with fantastic ideas and scenarios that they choose not to take further. These “start-ups” in Walton’s collection—which also include interesting bits like “What Would Sam Spade Do?,” a detective noir set in a world full of Jesus clones, and “A Burden Shared,” a near-future look at options for dealing with chronic pain—provide insights into the craft of writing, the act of whittling away at an idea. At the same time, though, they leave one wanting more. Indeed, it is the very strength of the ideas Walton introduces and plays with in these abortive beginnings that makes it so disappointing not to see them taken further.

But there’s another level of disappointment here, related to the very lens of viewing this collection in terms of the author’s insights on writing. For the reader approaching the volume from this angle, what made these unfinished pieces disappointing was not that they were unfinished (we already knew we’d find them so from Walton’s introduction) but that it comes to feel as if—especially in light of the insight she has offered on the “weight of endings” —Walton has missed an important opportunity to discuss that most difficult decision in writing: when to abandon a story.

Writers all have pieces like these in our respective authorial junk drawers—perhaps not pieces as sharp and realized as Walton hands out here, but certainly pieces that seem bright and compelling in their own right. And the primary hurdle of writing at times seems to be how one knows whether those ideas will flow into a short story, novel, or something else—and, when one has spent months or years wrestling with them, when perhaps to let well enough alone and leave them incomplete. Here Walton shows that this is something even the most accomplished writer experiences. But I wish she had explained the whys and hows of deciding when to end a story in this other sense—especially as there is a central, unacknowledged paradox in her advice on the other kind of closing: we never know the weight of an ending until we get there.

Though I found the prose pieces in Starlings most compelling, for completeness’s sake I should note that the final third or so of the volume consists of a long, humorous play and a collection of poems. The play is rambunctious and fun, following three legendary Irish sibling-heroes on a quest in which various myths and time periods are mashed together and the protagonists slowly come to the realization that they are inhabiting a story. The poems, meanwhile, might be of interest to those who love Walton’s writing and want all the pieces of it available. For the most part, to me they felt too stiff with literary and mythical reference and allusion to truly come alive. One that did strike me, though, was the raw and lovely “Sleepless in New Orleans,” a moving confession from the heart of a writer, in which Walton yearns to “keep talking the stars into a new sky / where maybe words reach” (p. 275).

Maybe that’s actually the central insight for which I was searching, the thread that ties together all the various fragments, stories, and sketches in this collection: that there isn’t a magic formula for any writer that transforms a cluster of brilliant ideas into a story. There’s just the yearning to do so, the constant desire to “talk the stars into a new sky.”

Like Loading...
© Copyright 2018 By: Stephen Case
About Stephen Case
Stephen holds a PhD in the history and philosophy of science and teaches at a liberal arts college in Illinois. His fiction has appeared in Beneath Ceaseless Skies, Orson Scott Card’s Intergalactic Medicine Show, Shimmer, and Daily Science Fiction. His first novel, First Fleet, is a Lovecraftian SF epic available from Axiomatic Publishing. Find him online at www.stephenrcase.com.
No comments yet. Be the first!