Reviews
Size / / /
Talk Like a Man by Nisi Shawl
By: Nicasio Andres Reed 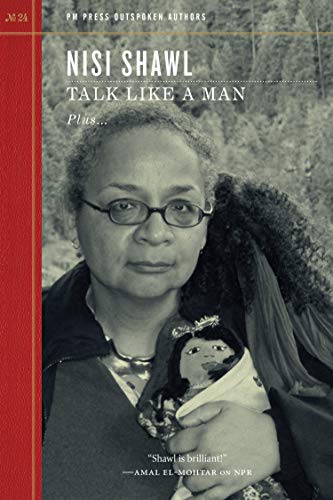 Nisi Shawl's most recent collection, Talk Like a Man, is part of the PM Press Outspoken Author Series. In following with the format of the series, this collection includes a small selection of Shawl's short fiction, one piece of long nonfiction, and an interview conducted by series editor Terry Bisson. It's a format that makes for something a little less complete than a short story collection, but a little wider in breadth than a tasting sampler. The quartet of short stories are formally diverse, ranging from science fiction to fantasy to slipstream, and feature characters from different walks of life—all women dealing with the boundaries of their own bodies and the edges of their realities, and pushing back against those limitations. It's a thought-provoking assemblage of narratives, especially when read in conversation with the nonfiction essay that delves into the relationship between science, science fiction, and Shawl's own practice of the West African religion Ifa.

In the essay “Ifa: Reverence, Science, and Social Technology” (adapted from a speech they gave at Duke University in 2010), Shawl takes point by point the reasons that a belief in science, and a life as a science fiction writer, aren’t as antithetical as some may think to their religious practice in particular, and in some ways to spiritual practices more generally. It's a topic that could do with a much wider platform in discussions of science fiction, particularly from this and other non-Christian points of view. Shawl takes us through the subject so pragmatically, with such step-by-step lucidity, that I had to stop myself and reread certain sections several times—first with an eye to their elegant logic, then to their conversational playfulness, and then to the transcendent spirituality of them, the way Shawl urges the reader towards a unifying whole.

A simultaneous belief in both science and in Ifa as ways of knowing is the solid ground from which Shawl builds the ways we can use these beliefs to expand our knowledge of ourselves, and our knowledge of the universe; there's also a lovely thread that seems to speak to letting go of one's ego in order to allow that knowing to happen. If you believe in science, or you believe in your religious practice, then there's a point at which you must trust both to tell you what they have to say, not what you want to hear. As Shawl writes: “In divination, both querent and diviner try to cast aside preconceived notions of the truth of a particular assertion, just as scientists do when conducting research.”

From this point of view, the stories in Talk Like a Man read as a series of castings, of hypotheses being tested. Is the experience of our human bodies like this, or like this, or like this? Can I exert control over my life and my death in this way, or that way, or not at all? Each story approaches these questions by means of a technology, something on which each character's life hinges. “Women of the Doll” and “An Awfully Big Adventure” deal with the power it's possible to claim from trauma, and what we're able to give of ourselves in the name of survival. In “Walk Like a Man,” meanwhile, social technologies allow groups of people to experience the same virtual, tangible world together, creating a landscape of the human imagination like a web of linked consensus realities. People in linked virtual spaces share their feelings with each other through touch, and experience a heightened sensorium limited only by what they can dream up. But there's no barrier-free utopia here, and anxiety pervades the story—about who is invited to or excluded from these shared experiences, about whether it's safe or desirable to have your inner life so openly seen by other people—and in the background there is a humming narrative anxiety about what's going on beyond the boundaries of the story itself, what the world that's implied looks like outside of its simulations: with new forms of social togetherness come new forms of social isolation.

The longest story in the collection is “Something More.” Its viewpoint character is Allie. She is a difficult person to sit with, a young woman whose racism leads her to resist the warnings and guidance of the mysterious Black woman who keeps appearing in her life. The costs of her hesitantion are grim, and the story follows her through the years of her life that it takes for Allie to get to a place that's as much desperation for her own safety as it is a willingness to see her own struggle as linked to that of a Black woman. Because Allie doesn't understand the technology used by her mysterious guardian, we the reader aren't privy to its details either; but we do get to understand that it works through music and poetry. It's a sort of magic that's only as effective as its poet is evocative. The performance of it brings to mind a moment in Shawl's essay when they describe the nature of offerings in the practice of Ifa.

Recently, the practitioners I celebrate with were directed to make an offering which included a particular kind of cloth. One member had previously researched how to weave that cloth, so she created it for the community. […] When the cloth was placed before the physical locus of the orisha to whom it was dedicated, all members of the community were present to touch the cloth, appreciate its beauty, and hear how it was made. The cloth’s ultimate disposition is yet to be determined, but the community as a whole, and the weaver especially, have reaped the rewards of patient diligence and the elevation of artistry. All offerings can bring practitioners together, and those that involve the sharing of creativity and knowledge are most effective in this work.

That feeling of a community belief, of a room full of people experiencing and appreciating the same work of art and being changed because of that shared experience, is at work in “Something More.”

The fiction in this collection is so well illuminated by Shawl's essay, in fact, that it's almost a shame that they aren't presented in reverse order—essay-first. In all four of these stories there's a certain desperation to the main characters—they're people who have been pushed, and are figuring out how to push back. If there is something religious or scientific about them, it's in that seeking for the connection between faith and agency. There are aspects of the world that they cannot fully trust, but to come into their own power, they'll need to find a way to start from a solid grounding in belief.

The odd-piece-out here is the interview with Terry Bisson. It's an irreverent and somewhat disconnected series of questions that has more of the feel of a casual, private conversation rather than a published interview between two longtime contributors to the science fiction and fantasy canon. However, in among the oddly informal interview questions lies plenty of space for Shawl to drop exciting tidbits about their upcoming projects and insights into their previous work such as Everfair and Filter House, to summarize the work of Con or Bust, the Carl Brandon Society, and to touch on the events of RaceFail 2009. It's a small window into the career of someone whose work on and off the page continues to shape how the science fiction and fantasy community see ourselves, how we read and write our own work, and how we learn to embrace each other in all our infinite diversities.

Like Loading...
© Copyright 2020 By: Nicasio Andres Reed
About Nicasio Andres Reed
Nicasio Andrés Reed is a Filipino-American writer and poet whose work has appeared in Queers Destroy Science Fiction, Strange Horizons, Shimmer, Liminality, Inkscrawl, and Beyond: The Queer Sci-Fi and Fantasy Comics Anthology. A member of the Queer Asian SF/F/H Illuminati, Nico currently resides in Madison, WI. Find him on Twitter @NicasioSilang.
No comments yet. Be the first!