Reviews
Size / / /
The Adventures of the Incognita Countess by Cynthia Ward
By: Duncan Lawie 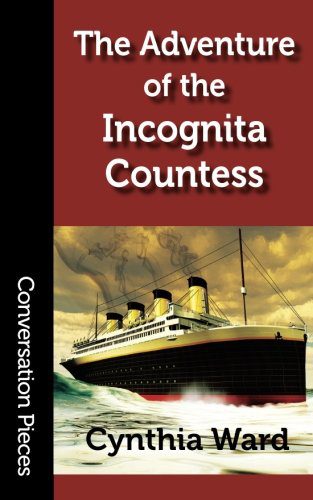 The Adventure of the Incognita Countess is a brisk novella and an amusing diversion. The “countess” in question is Lucy Harker, stepdaughter of Mycroft Holmes, natural child of Dracula and Mina Harker—and that should provide an idea of the work’s intent to blend as many pulp characters and ideas into its length as it possibly can. Given this mix, it is hardly surprising that Lucy is also part of the British Secret Service, working for her stepfather.

Despite all this, in the context of the period she is expected to play the role of an idle, wealthy, young woman—a member of the fairer sex. This is a habit she has already become used to, as disguising her unnatural strength and bloodlust is a necessity for her survival in polite society—particularly a society which is aware that they have monsters in their midst.

Lucy is, therefore, comfortable with taking on a role in which she cannot reveal herself as stronger than any ordinary man. The ordinary man for whom she must provide covert protection is an American official, taking home with him to the USA secret plans of the submarine Nautilus (yes, that one), travelling on the maiden voyage of the Titanic (yes, that one—though this version of the infamous ship has steam engines powered by Martian heat rays, rather than coal).

Lucy soon finds herself falling for Carmilla, that same ancient vampire from the works of Le Fanu, who is also aboard ship and whom, with her Austrian heritage, Lucy cannot bring herself to trust. This being 1912, we are also amidst the Great Game—and anyone Germanic must, naturally, be suspicious. Meanwhile, of course, Lucy has inherited the human side of her family trade, killing vampires.

Ward draws all these elements together more gently than my summary, so I never quite choked on the rich brew she has drawn together. Indeed, even as I read the novella, I accepted the addition of more and more elements to its tale. For me, one of the more intriguing elements of this novella is very much its variety: of the many types of vampire which Lucy encounters, for instance, and what, exactly, differentiates or limits them—from their resistance to holy water, sunlight, and garlic to their various capabilities for sustenance and methods of creation. This builds a lovely sense of merging incompatible sources through the application of taxonomy.

There are several more conventional sources of tension within this novel, which combine to keep the pages turning. First, will this Titanic sink, given the new super-science which has gone into its construction? For those familiar with the story of that fateful journey, the use of dates for chapter titles is likely to manage that question with great accuracy. Second, are there spies present and will they succeed? Besides Carmilla, we are rapidly introduced to a dashing German naval officer and his manipulative uncle. They are drawn directly from the Big Book of Baddies and are surprisingly generic amongst such a cast of named characters. Third, and most important for the development of Lucy as a person, what will happen with Carmilla and Lucy’s affair?

This is a lot to be getting on with. Lucy, however, anchors the story as very much the first-person protagonist, and she makes it clear that this is her “first solo mission.” She is neither quite ignorant nor innocent, but initially offers views which one might expect for someone of her time, age, class, and gender. And yet, a mere few pages in, she immediately accepts that her attraction for Carmilla is the real thing, and that her intimacy with a school friend was not a mere girlish exploration. Other aspects of her Edwardian upbringing stick rather longer. Her loyalty to the British Empire remains throughout the novel, meaning she must find some way to believe that Carmilla is not an agent of a foreign power. This in turn, though, leads her to discover that her actions as a killer of monsters may not be as clean and pure as she thought. What if those fully vampiric in nature have as much self as she does? Perhaps they, as much as she, deserve to be judged for their actions rather than simply for their nature.

Amidst all this, it was the appearance of Lord Greyborough that pushed me over the threshold. He is rumoured to have been raised by apes but was, in fact, brought up by a tribe of the supposedly extinct “Java Man” in Africa. Most of us will recognise yet another character from science fiction and pulp history. This mildly amusing conceit steers around the fact that Tarzan is not yet in the public domain—but it also points to an oddity at the centre of this genre of writing. Character reuse in the current era is trapped behind the slow glass of copyright law. The freedom to use most Victorian and Edwardian characters, but few more recent, encourages pseudo-pulp settings and storylines. But why would a twenty-first-century writer otherwise want to work in the arena of espionage between the British Empire and Greater Germany? Surely there are more on-point topics available? And what does a twenty-first-century reader take from a work like this which they could not get from the public domain originals?

Here, our protagonist is free to speak of her love for another woman when such a thing would have been near unprintable in the era that any of these characters were created. Here, we can make explicit critique of the lifeboats being, essentially, for first-class passengers. Here we can comment on the existence of a soul with the expectation that the reader might well find the very notion quaint. But does such “rescuing” of the pulps do either them or us any real benefit? Unless we are capable of genuinely recognising the past as a different country, we smooth and blur the variety of human experience. We devalue the true efforts of people in the past who were exceptions to the thinking of the time, those who created the possibility of a world where class, race, or gender are not the wholly defining characteristics of an individual. Further, we trivialise the mindset of unthinking, unknowing oppression with the idea that, if those who inabit it were simply woke, the world’s problems would be solved. An amusing diversion can all too rapidly become suppressive.

Like Loading...
© Copyright 2018 By: Duncan Lawie
About Duncan Lawie
Duncan Lawie has been reviewing SF for half as long as he has been reading it, although there was a quiet period during two years as an Arthur C. Clarke Award judge. His reviews also appear in the British Science Fiction Association's Vector Magazine.
No comments yet. Be the first!