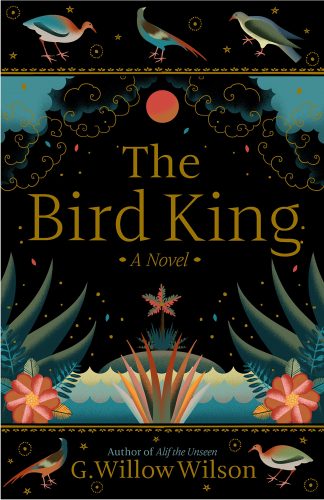 When taking on a retelling, most writers want to highlight reality. After all, everyone knows what the fantasy elements of a fairy tale are supposed to be. There’s a dragon, or an evil queen, and there’s always a hero. It’s the reality—the political negotiations, the daily struggles, and even the particulars of the terrain—that is most subject to change and the most obvious way to add texture.

I think we enjoy this sub-genre not because we’re Serious Grown Ups Now, but because it gives us the opportunity to believe that magic might still exist in our bloody, muddy world. Everything from Russian unification to Tang dynasty conflicts are a lot more palatable if we know there’s a hero to show us the way through all the historical mess. But by and large, that magic and those heroes have to be at the edges of the larger sweep of history. Otherwise, isn’t the retelling just another … telling?

Willow Wilson doesn’t think so. With The Bird King she tries to create a new kind of retelling, one that introduces reality as a bit of color to a largely fantastical tale. It’s the fantasy that provides all the texture and grit: the story is not about how a few magic individuals fit within a larger historical setting, but how a historical setting brings into relief what are ultimately mystical and fantastical truths. It’s a very smart approach, and it’s one I appreciate even if I don’t fully believe that it succeeds.

Part of it is the nature of the story that Wilson has chosen to reimagine: The Conference of the Birds is a complex twelfth-century mystical text, not a straightforward fairytale. It resists simplification to recognizable elements, and so reconstituting a story from those elements is not so straightforward as it might be with something out of Hans Christian Andersen. It’s also not widely known by Western English-speakers, so while she’s trying to re-tell it, she’s also trying to explain what it is in the first place.

And what it is is a meditation on the nature of God, the possibility of direct revelation, and the way to live a meaningful life. You know, small stuff like that. The Conference of the Birds is also part of a larger tradition of specifically Muslim (and even more specifically, Persian Muslim) mysticism, and it uses a specific lexicon of imagery and themes to convey its points. The idea of creation as a mirror in which God contemplates Himself is one that doesn’t have much analogue in other traditions, but it’s one that Wilson has to integrate into her story, and do it in a third historical context: the setting she’s chosen is the fall of Granada and Muslim Spain to Christian forces, which is yet another point of potential unfamiliarity and confusion for an Anglophone reader.

The story proceeds smoothly enough at first, thanks in part to its complex and compelling protagonist. Fatima is a concubine to the sultan of Granada, a rapidly shrinking empire which, by the time the book opens, is limited to the city itself. But, since Fatima is forbidden from leaving the confines of the harem, this is a theoretical problem at best. She spends her days longing for freedom that she can barely imagine, and learns to escape through books and a friendship with the king’s mapmaker, Hassan.

Hassan is technically forbidden to Fatima as well, but the court turns a blind eye to their meetings, since Hassan is gay. His utter lack of interest in Fatima for her body is one reason she loves him; another is their shared passion for The Conference of the Birds; yet another is his uncanny skill with maps. Hassan can make maps of places he’s never been, and add features to those maps that then become reality. Hassan uses this ability to serve the sultan, but also to bring Fatima a few extra scraps of freedom. After all, a secret door or temporary room can’t hurt anyone.

The Spanish Inquisition disagrees. Luz, the Inquisition’s representative, believes Hassan must be in league with the devil, and she wants him executed as soon as possible. The crumbling sultanate cannot protect him, so it’s up to Fatima, in borrowed boots and with no sustenance but anger in her belly, to get them both away from Luz.

Luz’s character is the first place where cracks in the story appear. Her cloak of friendliness conceals profound sadism, which she reveals early on when she kicks a stray dog. The moment in some ways encapsulates the book: it’s effective on an emotional level, but it’s too heavy-handed on a narrative level. Kicking a dog is a trope so tried and true that it gets an entire page in Stephen King’s On Writing. And it’s not even enough for Wilson, who then has a supernatural evil take possession of Luz for good measure. This bestows on her an overwhelming amount of power compared to what the protagonists can muster, and it flattens out the character.

Wilson also unfortunately writes herself into a bit of a corner when she chooses to have a sheltered concubine and an equally sheltered mapmaker flee from heavily armed and organized forces. They need the assistance of the djinn Viktor (and later other djinn) to ensure their escape and continuing survival. Fatima and Hassan don’t know how to feed themselves, cannot defend themselves, and can barely walk. At one point, Fatima must stop their progress to tend to her feet, reminding Hassan that, “The farthest I’ve ever walked in my life was from my room to yours” (p. 152).

As a commentary on the way that women were hobbled even as they were showered with luxury, it’s an elegant and heartbreaking line. As a metaphor for pilgrimage and spiritual struggle, it’s a powerful image. But as a facet of an escape tale, it’s a real challenge to the narrative structure.

Even though the djinn exist to solve this problem (narratively speaking), they become too much of a narrative crutch. They show up to solve exactly as many problems as necessary before disappearing, only to reappear when things are once again in a dire state. Wilson leans heavily on their “capricious” nature to justify the convenience of their presence or absence, but caprice is like villainy: without sufficient complexity, it’s a bit hollow.

It’s also another artificial limitation on characters who are otherwise too powerful for the narrative. Viktor can (and does, at points) outrun the Inquisition while literally carrying Fatima on his back. The Bird King teeters on the edge of rendering Fatima and Hassan superfluous to their own story at certain points, since the battles are largely fought and won by supernatural entities, not human determination or ingenuity.

But even when the human characters get to display their talents, they risk undoing the narrative with overpowered magic. From a narrative standpoint, it’s unclear to me why the trio doesn’t make use of Hassan’s skills. He could, theoretically, draw them secret passageways and secluded hiding places wherever they go. Wilson generally inhibits his overpowered abilities by placing him in immediate peril quite often, so that he has no time to work on a meticulous drawing. But, as with kicking the dog, this strategy shows its seams. It’s a little obvious, and it obviously inhibits Wilson from doing the writing she seems to really love, which concerns the metaphysical, not the physical.

The true and truly satisfying struggle in the novel comes in that between the magical and metaphysical. Survival may be physically taxing, but it’s an easy choice to make. But faith? That’s hard when being tortured, or sailing off the edge of the known world. At any point, the characters could stop, convert, and repent of their supposed “sins.” Whether to keep their convictions is the true conflict; how they keep their faith is the true triumph.

I appreciate that Wilson complicates basic ideas of love, happiness, and freedom rather than reflexively assuming they are worth achieving. Is freedom truly worth the terror, hunger, and uncertainty that come with it? Especially when the alternative is luxury and prestige? The value Fatima places on freedom in the early book, when she can barely imagine the world outside, is far less powerful than when she reflects on freedom later:

And she had escaped: she was free, and though freedom was neither happiness nor safety, though it was in fact a crueler and lonelier thing than she could have imagined, it was real, just as the ship was real, and like the ship, it was hers. (p. 302).

As for love, there is an awkward, bittersweet romance between Fatima and Hassan. They love one another on a deep, spiritual level, but their sexualities are incompatible. To find true fulfillment, they have to learn to share one another more generously with others, which is no easy task for people who were taught that love is possession. Like freedom, love is a far more delicate and difficult proposition than it initially appears.

Once they reach Qaf, the mystical realities come into full focus, and The Bird King begins to truly shine. Fatima and Hassan begin to make a world of their own choosing, one replete with the meaning they have gathered along their journey. Fatima, who once wished to be sultan (p. 80), recognizes herself as the titular Bird King, a ruler over her own destiny. Other refugees from war and oppression join them, and they begin the hard, glad work of building paradise.

Of course, even the miraculous island is not free from threats: Luz follows Fatima and Hassan to its shore, but when she is poised to defeat them at long last, the evil entity sustaining her suddenly abandons her.

As a narrative element, it’s jarring and nearly meaningless, since it’s not Luz’s choice to let go of the entity. But as a spiritual metaphor, it brings the book to a meaningful resolution. Humanity is here beset by forces far beyond any individual’s control, including evil. This evil might be initially attractive, but it ultimately betrays you in the moment of greatest need and leaves you alone. The only way forward, therefore, is to seek fellowship and self-understanding, and learn to accept the presence of ugly reality in a spiritual world. When Fatima manages this, coming to a spiritual awakening in the midst of battle, her realization is the means by which evil is finally struck down. This is lovely, and only possible on the magical island of Qaf, where metaphor is reality.

One character reflects towards the end of this novel, “I’ve come to realize that I must share God with the things that God has set askew” (p. 296). The struggles to love, and hope, and be free are far more intricate than the struggle to escape the Inquisition. Wilson lavishes her attention on those inner struggles, and so the solutions are more elegant, more powerful than the instances of escape or combat. It’s clear that Wilson is trying to get at very profound themes, and by and large she succeeds on this level. Certainly the emotional core of the novel remains powerful throughout. Though it stumbles, then, The Bird King is a powerful parable of acceptance, difference, and empowerment.