Reviews
Size / / /
The Dollmaker by Nina Allan
By: David Hebblethwaite 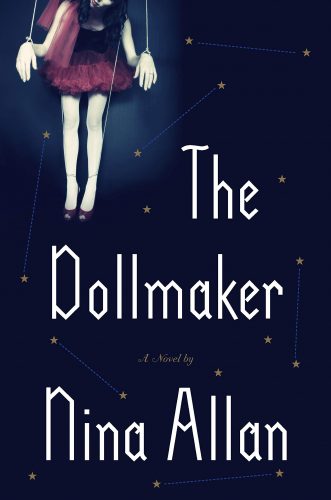 Parallel universes, approached obliquely, are a recurring device in Nina Allan's fiction. Her debut novel The Race (2014) shows how characters’ lives can be thwarted, and their horizons limited, by presenting closed-off versions of Britain that blur the line between fiction and reality. The collection The Silver Wind (2011) presents a series of alternate timelines linked by an (at best) unreliable means of time travel; a sense of loss inheres in the way that the book's pieces refuse to fit together coherently. Now comes The Dollmaker, Allan's third novel (following The Race and 2017's The Rift). Again, this draws on the idea of parallel universes, but in service to a tale of love and relationships.

The novel’s take on alternative worlds is set out in a scene featuring one of its main characters and her then-boyfriend, who says to her:

Like if there was another version of reality right next to ours, a version of the world in which the quarry never closed down, and so the trains kept on running. And maybe sometimes people in our world can hear them, the way you can sometimes hear people talking through the walls in the house next door. (p. 230)

This view of parallel universes places the emphasis on sensation and emotional response rather than cosmology, and that's also how the theme plays out in The Dollmaker as a whole. The first two narrative strands tell the stories of Andrew Garvie and Bramber Winters, two dollmakers who come to converse with each other via letter; although both characters have been sidelined in life, and have found dolls key to breaking away from that, their strands in the novel are structured in a way that underlines the distance between them.

Andrew's chapters are narrated to us in the first person, and are organized around a train journey he takes to Bramber’s home in Devon. When he arrives in a new town, he spends some time on a travelogue (which may not have much relevance to the main story), and also fills us in on his background.

Andrew had a hard time at school, to say the least. His height (four feet nine inches) made him an object of derision: “the Dwarf” is the only nickname he is prepared to disclose. His refuge from this, and the foundation of his future life, lay in collecting dolls. Andrew's fascination with them began when a particular doll caught his attention in a shop when he was a child. Though he now knows there was nothing intrinsically special about that doll, still he recognizes what the toy represented to his younger self:

She drew the eye, as all things born of sentient creativity are bound to draw the eye. She had presence. More than that, she had dignity. (p. 2)

In other words, the doll had qualities that the younger Andrew himself did not. One might say that owning the doll helped make him feel whole. Over time, Andrew becomes a serious collector of dolls, and dabbles in making them. When he accepts a commission from a work colleague to make a doll, word of Andrew's prowess starts to spread; eventually, he is able to leave his office job and become a full-time dollmaker.

When reflecting on dolls in general, Andrew says he has “read that the doll is a surrogate: for friendship or for family, for love” (p. 5). This seems true to an extent in Andrew's case. Certainly dolls provide a framework through which he views his experiences: “Was I simply a doll to him, one of his rude mechanicals? )p. 23}” Andrew wonders, for example, about the other party in an abusive relationship he endured as a teenager. In another instance, a relationship with Ursula, the woman who first suggested that Andrew try making dolls, ends when she walks out of his life without warning; years later, Andrew finds a doll he made for her in an antique shop; he buys it and discovers that Ursula has cleaned it so thoroughly as to remove her scent from it. Andrew takes this as a firm message that what he had with Ursula is over.

Andrew's life is set to change when he responds to a personals ad in a doll-collecting magazine. It's the name of the poster that attracts him: Bramber Winters. The actual advert is a simple request for friendship or correspondence, and information on the life of Ewa Chaplin, a Polish writer and dollmaker. Andrew is not an admirer of Chaplin's dolls, put off by their “edge of the uncanny” (p. 11), but he continues to write to Bramber, feeling a deep connection with her through her words. A year later, Andrew decides that he and Bramber "were destined to be together" (p. 12), and gives her his phone number. When she replies that she has no access to a telephone, he is not deterred, eventually deciding to travel unannounced from his home in London to Bramber's in Devon.

Although Andrew is ultimately a sympathetic character, an element of self-absorption runs through his narrative: the way that he decides he should be with Bramber (never mind what she might think); the fact that, apart from the odd extract, we don't get to read the correspondence he sends to Bramber (which would show how he opens his heart to her rather than to us). This emphasizes that Andrew's viewpoint is, to all intents and purposes, its own "world”.

The Dollmaker is thus split into three strands, which reflect the novel's take on parallel universes. In contrast with Andrew's first-person strand, what we read of Bramber's story comes entirely from the letters she sends to him. There is plenty of detail on Bramber's past and present life in these letters, but the play of the epistolary format against Andrew's narration serves to suggest that there is a life going on behind the correspondence which he (and the reader) doesn't see. Bramber's letters are undated, which increases the sense of two separate life-worlds: we read the two characters' chapters in parallel, but their narratives are not unfolding simultaneously—most of Bramber's letters were written well before Andrew boards his train. In effect, we're experiencing a conversation at right angles: Bramber talks to Andrew, but Andrew talks to us. The shape of the novel prevents their worlds from intersecting (but wait).

The Dollmaker's third narrative strand is a series of self-contained stories framed as extracts from Ewa Chaplin's Nine Modern Fairytales, which Andrew reads during his journey to Devon. These tales are described by a critic within the novel as dealing in “cruel reversals and secret triumphs in an uncertain world” (p. 173). The stories we read in the course of Allan's novel largely live up to this dark billing, and are some of The Dollmaker's most enjoyable moments. For example, there's “Amber Furness,”, the story of a young woman who becomes intrigued by a dwarf clock-seller with an apparent ability to manipulate time; or “The Elephant Girl,” which tells of how a pregnant teacher is affected by the arrival of a mysterious new schoolgirl.

What ties this strand to the theme of parallel universes is that Andrew starts to notice aspects of his life being reflected in Chaplin's tales. “Amber Furness” reminds Andrew of his time with Ursula, while “The Elephant Girl” brings to mind his agent's daughter. The tantalizing suggestion is that the worlds of fiction and reality have bled into each other. The structure of a novel with embedded stories featuring different versions of the same characters recalls Helen Oyeyemi's Mr Fox (2011), and Allan's novel has the same tricksy sensibility and sense of openness as to where it might head.

Towards the end of the novel, the possibility arises of crossing the boundary between parallel universes. On his travels, Andrew impulsively steals a Chaplin doll from a museum; it begins talking to him (maybe for real, maybe as part of a delusion) and offers him visions of adventure. That's the grand, fantastical version of traveling between worlds; more down-to-earth (but no less significant) is the fact that Andrew's and Bramber's worlds are about to intersect. The question is: which path will Andrew choose?

Allan uses parallel universes in The Dollmaker, then, to illustrate the distance that can lie between people in everyday life, and what might make one move closer to or away from the divide. It's an elegant performance that jumps back and forth between perspectives and styles. All in all, The Dollmaker is a delight to read.

Like Loading...
© Copyright 2019 By: David Hebblethwaite
About David Hebblethwaite
David Hebblethwaite was born in the north of England, went to university in the Midlands, and now lives in the south. He has reviewed for various venues, including Vector, The Zone, Fiction Uncovered, and We Love This Book. He blogs at Follow the Thread.
No comments yet. Be the first!