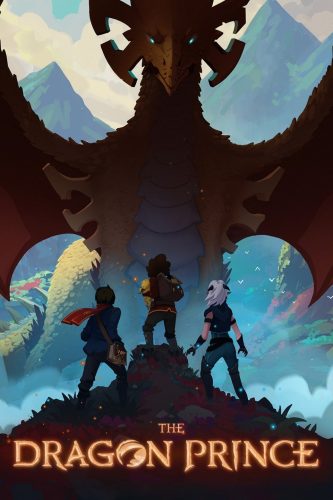 As with many other Netflix productions, the initial attraction of The Dragon Prince comes from the series’ brand-name creator: Aaron Ehasz, who wrote some of the most memorable episodes of Avatar: The Last Airbender (2005-2008) and also contributed to several comedies, notably Futurama (1999-2013). It’s pretty clear, though, that what Netflix wanted from Ehasz is another Avatar—an epic adventure story, told in continuous arcs across many episodes, targeting children and young adults as its main audience but also holding enough appeal for the occasional adult viewer. For his part, Ehasz appears to have been only too happy to deliver.

The show is set in a pseudo-medieval world where humans and elves have been feuding for centuries, a conflict that has recently turned ugly following a human attack that robbed the Elven kingdom of one of its most important treasures. Now it’s the elves’ turn to retaliate, and when the show opens, a gang of elven assassins goes on a mission to kill the human king. A highly convenient turn of events follows, forcing the king’s son Ezran and the king’s stepson Callum to join renegade elf assassin Rayla on a perilous journey to the elven kingdom, having gained possession of an object that could bring peace between elves and humans.

If the above description sounds a bit too familiar, that’s probably because it does not only rehash of many concepts already used by Ehasz in Avatar: The Last Airbender, but it also features—especially in its visuals—some of the most reused and overworked tropes in the fantasy genre: the epic quest, riddled with magical plot-device objects for the protagonists to pick up along the way as they fight monsters against a clichéd backdrop (more on that later). The show’s producers have claimed it to be a family-friendly version of Game of Thrones (with too many reviewers buying into this hype), but despite the similarities in several props, it really isn’t. If I had to look for parallels, I’d say that The Dragon Prince feels more like The Lion King gone Terry Brooks.

But bear with me a little longer if the last sentence made you want to stop reading the review and get as far away from the show as possible. It’s actually much better than that sounds. Even when they are working within a familiar narrative frame, Ehasz and company demonstrate an impressive storytelling talent. So impressive, in fact, that, when I went over the season again while writing this review, I realized something I’d seemed not to notice on first viewing: in comparison to the two dense and eventful opening episodes, and the equally dense and eventful two closing episodes, the show switched to a slow, even relaxed, pace in its five middle episodes. This wouldn’t have been much of a problem if we weren’t told that the protagonists are both on a tight deadline and are running for their lives. And still, even when it seemed that the plot wasn’t really going anywhere, The Dragon Prince managed to keep me interested, largely thanks to its cast of charming characters.

Callum’s character, in particular, steals the show. Reminiscent of Sokka’s character in Avatar: The Last Airbender, Callum is full of good intentions but also somewhat overconfident and cocky, and above all can’t quite match up to the image he tries to build around himself. This is one place where The Dragon Prince actually scores high where Avatar missed; Sokka was largely underused in the initial episodes of Avatar, as though the producers were not quite sure how make him fit into the story. In The Dragon Prince, Callum is basically the main protagonist—a far from perfect protagonist, who often makes mistakes, but also one who the audience has an easy time rooting for, largely thanks to his well-established background as the king’s stepson who was never meant for greatness. Other memorable characters include Soren and Claudia, a brother and sister team sent to capture the protagonists—who manage to come across as beloved characters despite working for the big bad—and Callum and Ezran’s deaf aunt, Amaya, who is refreshingly also a great warrior.

But while likeable characters help elevate The Dragon Prince above its generic narrative premise, the visuals have a harder time in this department. Avatar: The Last Airbender managed to rise above the trappings of generic fantasy by bringing together visual elements from western and eastern cultures; this, in turn, also contributed to the series’ cosmology, introducing a rich mythological background for stories to build on. The Dragon Prince’s tired and overused “trees and horses” backdrop often feels flat and unappealing. Worse, it also flattens the show’s premise considerably: even when the show attempts to fit more complex themes like a magic system into the inner workings of the show’s world, these don’t really feel connected to the overall picture as the bending mythology did in Avatar. It should be noted, though, that against the visual weakness of the generic backdrop, action sequences in The Dragon Prince are highly effective, even if there’s a surprisingly small number of them (budget-related issues, perhaps?).

The Dragon Prince feels as though Ehasz was playing it a little too safe—trying to redo his previous hit while dropping the elements that made it unique. But the potential is still there: with a sympathetic cast of characters, strong plotting and hints of mythology that will hopefully be better developed and implemented in the future, the show certainly can overcome its problems—and I hope that in its recently announced second season, it will.

Like Loading...
© Copyright 2018 By: Raz Greenberg
About Raz Greenberg
Raz Greenberg divides his time between working as a content editor, lecturing on comics and animation in several academic institutes, writing reviews and articles for a variety of publications (Strange Horizons, Tablet Magazine, and All the Anime, among others), and writing fiction. He muses about overlooked genre classics at the Space Oddities Facebook page.
No comments yet. Be the first!