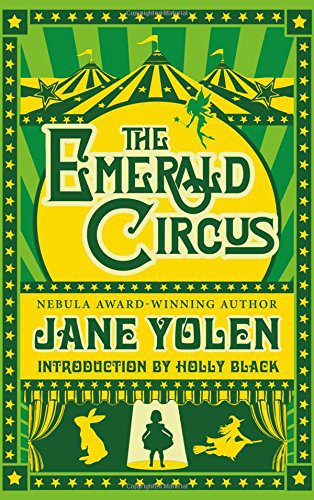 The Emerald Circus, Jane Yolen’s new story-collection, includes work from many different phases of the author’s career. Yolen has, of course, a long and distinguished track record as an American fantasy writer, so it is informative to read these stories together with their dates and observe the rise and shift of her interest in different subjects and voices as the genre moves through the 1980s and 1990s into the present day. The earliest chronological entry in the collection, “Evian Steel,” is feminist Arthuriana, a 1985 retelling of the forging of Excalibur. It is also a contextual indicator of the immense impact of Marion Zimmer Bradley’s 1983 Mists of Avalon: a book we don’t like to discuss very much anymore, on account of the destructive history that accompanies it. Reading Yolen’s collection, however, reminded me that Mists of Avalon was one of the predominant fantasy texts of the Reagan years—a fact containing some grim implications for the era as a whole. It should also make us give thanks for the existence of Gwyneth Jones’s five-part Rainbow Bridge series (2001-2006), which is probably the most specific SF/F antidote we’ve got for the bad medicine of Mists, among other evils.)

However. Returning. Yolen’s well-paced, involving “Evian Steel” is clearly also contemporary with the genesis of her own Great Alta novels, which she began to publish in 1988. It shares their interest in organized single-sex communities and in the social construction and maintenance of places of sanctuary, addressing the experience of girls who have actually found their way to a safe haven. For the duration of the story, at least, Elaine and her charismatic friend Gwyneth are protected by a small matriarchal smith’s-cult that has established itself on an island in a river near post-Roman Glastonbury. Yolen’s depiction of adolescent female friendships and the personality-driven institutional wrangling of the council of nine Mothers who oversee Ynis Evelonia, “Eve’s Island,” is both poignant and convincing, and her foreshadowing of the tragic future history of Gwyneth (Guinevere) and Elaine is decisive but not overdone. Yolen’s abiding interest in Arthurian material is represented in The Emerald Circus by this and two further entries from the 1980s: “The Quiet Monk” (1988) deals with the after-history of Lancelot and Guinevere’s adultery, and “The Confession of Brother Blaise” (1986) takes up the question of Merlin’s origin, as told to medieval England’s most notorious and fantastical chronicler, Geoffrey of Monmouth.

During the 1990s, Yolen participated as author and editor in the development and popularization of urban fantasy. Among other undertakings, she commissioned work for the shared universe of Terri Windling’s hugely successful Borderlands series.  Urban fantasy trends grunge-Elfish; its accent is on grit, edge, and the moral ambiguity of both mortal and supernatural existence. These thematic markers are present in at least one entry in Emerald Circus, “Belle Bloody Merciless Dame” (1997), in which the human protagonist solicits sex from an unusual-looking nightwalker and gets rather more than he bargained for. Two other spiky, uncomfortable stories from the 1990s, “Wonder Land” (1996) and “The Gifts of the Magicians, with Apologies to You Know Who,” (1992) underline Yolen’s signature practice of attaching new fangs, and feelings, to received tales.

Abandoning chronology, let me note that Yolen clearly enjoys witnessing and thinking about the act of writing, wherever she finds it. A deal of ink is shed as part of the action of these stories. We see a dying confession still glistening on the page, in “Brother Blaise,” and read the obsessive jottings of an alienated Scotsman determined to uncover witchcraft in “A Knot of Toads” (2005). We hover over the tantalizing poem-fragments Emily Dickinson struggles to complete before she is interrupted by the alien sublime in “Sister Emily’s Lightship” (1996), and admire protest-posters scrawled by the indignant, radicalized and increasingly individualistic “Wendies” who revolt against Peter Pan’s exploitation of their domestic labor in the delightful “Lost Girls” (1997). In the best of these works, storytelling—with its concomitant generation of an author-legend—is movingly reimagined in a way that stirs and consoles the reader, opening up new lines of thought about authorship itself. In my favorite work in the collection, “Rabbit Hole” (1997), Alice Liddell, age 80, goes back to Wonderland and in so doing establishes beyond all doubt the degree to which she is both demiurge and irreplaceable co-creator of Lewis Caroll’s Alice in Wonderland. Here we find her, descending with seasoned stateliness into her own realm of dream-logic:

As if accommodating to her age, the hole let her fall slowly, majestically, turning over only once or twice on the way. A queen, she thought, would fall this way … She fell slowly enough that she could adjust her glasses to see onto the shelves, and so that her skirts never ruffled more than a quarter inch above her knees.

It’s an affectionate, sure-handed portrait, and Alice-at-eighty possesses a voice that’s pitch-perfect on loss, memory and experience, all of which are folded into her re-incorporation with Wonderland itself:

… she landed, softly, upon a mound of dry leaves and found herself in a lovely garden … [that] reminded her of her own lovely garden at Cuffnells, the small one that was hers, not the larger-than-life arboretum that Reggie had planted, with its Orientals, redwoods, and Douglas pines. Poor lost Cuffnells. Poor dead Reggie. Poor gone everybody. She shook her head vigorously. She would not let herself get lost in the past … [which] was a lot like Wonderland: treacherous and marvelous and dull in equal measure.

This is a new Alice, come through the full span of her own life to reclaim and revisit the verse-haunted, surreal tales that will ensure her fictional immortality. Our thoughts about Alice in Wonderland are enriched by Yolen’s work in “Rabbit Hole.” Only a consummate storyteller could have written it. Similarly terrific is the story from which the collection takes its title, “Blown Away,” (2013) which re-makes Oz into a set of transformative opportunities and experiments offered to Dorothy Gale by The Emerald Circus as it travels through the tornado-pestered American Midwest. When Dorothy returns to the Kansas farm as a glamorous professional performer, she brings disturbance and reformation in her wake. Here, the narrator—one of Uncle Henry’s hired men—watches uneasily as she rehearses her high-wire act on a jury-rigged barnyard tightrope. He senses change coming, from angles he can’t anticipate.

[Dorothy] started off cautiously, one small slippered foot after another, testing the tightness of the wire. But after about three steps, she walked as if going along a wide asphalt road. Even stopped in the middle to turn like a whirligig, arms wide open, before lifting one leg high in the air behind her.

“Arabesque,” she said, as if that was an explanation.

This Dorothy, Jane Yolen’s Dorothy, knows more than the narrator knows, and has travelled a path more spectacular and perilous than the Yellow Brick Road to arrive at that knowledge. Her mature and witchy difference from L. Frank Baum’s Dorothy is understated but total; it is dependent on a complete (and mature, and witchy) transfiguration of the source material.

Some entries in the collection, however, are much slighter. Yolen is justly famous for revisions or retellings of stories from the diverse, high-piled treasure-house of folklore and myth, and in places here she also engages with received historical anecdote. (For instance, “A Knot of Toads” is plotted around the 16th-century accusation and trial of the Witches of Berwick, instigated by King James VI of Scotland, aka James I of England.) In all cases, it’s worth asking a few questions: “Does this retelling need to be done? For whom is it being done, and why?” “Need” is of course a tricky word. We’re getting better at embracing pleasure-in-reading as sufficient cause for carrying on as much as we bloody well like with whichever authors have the knack of delivering what we enjoy. And as I hope I’ve made clear, a good number of deft, toothy, and graceful pleasures reside in Yolen’s Emerald Circus.

But alongside them, The Emerald Circus contains stories in which the retellings or emendations undertaken are insufficient to the quality of the received material Yolen has decided to intervene in. Cases in which preexisting works by other authors do not gain in meaning, or accommodate themselves to believable alteration, through her reworking. As examples I would list the confusingly-motivated “Our Lady of the Greenwood” (2000) which deploys all of Elfdom in the service of an anticlimactic name-origin story for Robin Hood, and “The Bird” (2017), which depicts the composition of Poe’s “The Raven” as the consequence of a macabre experiment in pet-husbandry. It’s doubtful that the Robin Hood myth, or Poe’s famous poem, benefits from what the author has chosen to do here: and it’s hard to enjoy a tale where the source text is shaken in an effort to make it release something it never contained. It’s an unreserved pleasure, however, to reflect on the dedication and breadth of Jane Yolen’s work in the field of short fantasy fiction, the finest instances of which are not to be missed. And many of them are currently on tour, in The Emerald Circus.

Like Loading...
© Copyright 2017 By: Catherine Rockwood
About Catherine Rockwood
Catherine Rockwood is a poet and independent scholar based in Massachusetts. She gets verklempt in rare-book libraries and the SF/F section of well-stocked bookstores. Essays and reviews in (or forthcoming from) Rain Taxi, Mom Egg Review, and Tin House. Poetry in concīs, Antiphon, Upstart, and elsewhere.
No comments yet. Be the first!