Reviews
Size / / /
The Enclave by Anne Charnock
By: Kelly Jennings 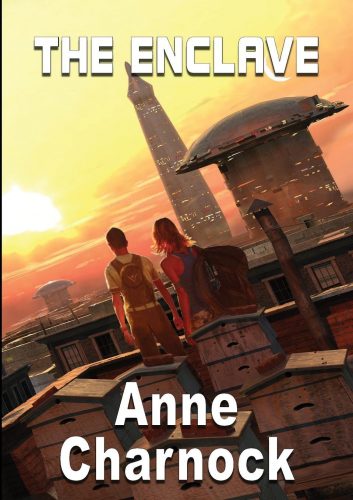 In most of her novels, Anne Charnock places her readers deeply into the point of view of characters so fully inculcated in their culture that, far from questioning the disturbing aspects of that culture, they don’t even notice them. This technique works well to create an immersive experience for the reader of the worlds Charnock has built. Because her characters don’t react with alarm, very often we also accept these horrific worlds as well—at least at first.

In A Calculated Life (2013), for instance, we were embedded in the point of view of Jayna, a simulant—an organic robot, more or less; a genetic tool manufactured to handle complex calculations for the business to which she has been leased. In that novel’s world, advances in genetic engineering have made it possible to inoculate people against addictive behavior, including addictions to violence and other non-productive behavior. It is also possible to implant devices into the human brain, allowing an increase in intellectual abilities. Not everyone gets the inoculations; not everyone qualifies for the brain implants. And even with these inoculations and the implants, humans can’t compete with simulants like Jayna.

Nominated for multiple awards, A Calculated Life was Jayna’s story, and chronicled her growing recognition of her own humanity and exploitation. But its readers saw what Jayna doesn’t: how the new technologies of her world create a rigid class system. Those who live in the world accept the class system and see it as justified—insofar as they think about it at all—since it is based on “choices” made by those who live in the system. For instance, if you commit a crime, or someone in your family does, you can’t qualify for an implant—thus limiting your employment opportunities forever. Similarly, if you haven’t been inoculated, for whatever reason—from religious objections to philosophical objections to sheer poverty—you are limited in both the jobs you can do and the places in which you are allowed to live.

The places in which the un-inoculated and non-implanted live are called enclaves. During A Calculated Life, Jayna and a non-inoculated friend she has made visit the enclave in which he lives—and this is the setting we return to in this most recent novella.

Aside from a brief glimpse of Jayna, she is not a character in The Enclave. Instead, the novella centers around twelve-year-old Caleb, a victim of human trafficking. Caleb, who lives on the roof of a building in the enclave, is a child slave. He works sewing clothing ten or twelve hours a day for “Ma Lexie,” who seems herself to be owned by a mafia-style recycling business.

Like Jayna, however, Caleb does very little questioning of the world he lives in. His parents seem to have been middle-class citizens who struggled to remain middle-class as the post-climate-change world collapsed around them. They raised Caleb with their own ethos: a belief that good manners, hard work, and a positive attitude lead to success. At the start of the novella, Caleb still believes this. True, he has lost both his parents. True, he is imprisoned on a roof, sewing twelve hours a day for Ma Lexie. But Ma Lexie tells him she’s putting money aside for him, which he can have when he’s fifteen; and he has ambition. He believes he can win Ma Lexie’s favor with his hard work and “jolly” attitude. He believes he can, by working hard, by having a positive attitude, and by creating new clothing designs, become rich and successful. And indeed as the novella opens, his plan seems to be working: Ma Lexie has just promoted him to foreman, overseeing a crew of two even younger boys. But as the novella progresses, we see Caleb begin to doubt the teaching of his parents and their culture.

A key metaphor that runs through the text is Caleb’s memory of his friends playing football in the street. His parents kept him from playing with his friends, so that he could spend more time studying—hard work leads to success, after all. Even as a young child, Caleb knew his strengths did not lie in the academic world; and in fact his so-called successes with Ma Lexie and elsewhere have proceeded from his ability to deal with people. When as a child he joined his mother in her goal of fleeing to Wales, he was adept at managing his place amongst the other refugees; later, he has become good at managing his fellow slaves, and at managing Ma Lexie as well. His reoccurring memory of playing football with his friends reflects this—he’s a team player, a team leader. Working with others, being part of a team—a culture—is where his strengths lie. But this is a skill he is not allowed to develop. This is a skill this future world has no place for. A turning point in the novella comes when Caleb sees a pack of enclave children playing ball in the street. He notices that they aren’t playing by any rules he understands. Rather than working as a team to score goals with a ball, they use sticks to hit one another—not to hit the ball toward a goal, but to hit each other. This is not his first clue that the rules of this world are not the ones his parents taught him; but it is his catalyzing moment.

As with Jayna, Caleb’s culture is broken. That is to say, it works in the limited way in which it has been designed to work—it uses people (and simulants of people) as tools to enrich those very few who own most of what remains of the viable world. But for those who are being used as tools, the culture has been shattered, and what is left are refugees fighting over the remains of the old world.

The novella ends with Caleb fleeing from Ma Lexie, determined to make his own way to Wales. This seems like a semi-happy ending, except for Caleb’s final thought in the book, which is that he will trust no one, ever again. While that is certainly the proper lesson to have learned from the broken culture of the enclave, as a replacement for “good manners, hard work, and a positive attitude,” it’s no improvement.

This is clearly one of the themes of Charnock’s fiction. Both the novel A Calculated Life and the novella The Enclave are told from the point of view of members of an underclass—slaves, to put it bluntly. Neither of these characters are aware of their status. Caleb doesn’t ever seem to understand that he’s been trafficked, that he’s enslaved; to the last page of the book, he thinks he’s chosen to come work for Ma Lexie. Likewise, Jayna thinks her status is reasonable, given that she’s a simulant. Even though both characters have, by the end of their narratives, stopped being loyal to their owners, neither has shrugged off their enculturation. In other words, both are runaways—they are not abolitionists. (There is an abolitionist-like character in A Calculated Life, but it isn’t Jayna.)

Both in the earlier novel and in this novella, Charnock has written an if-this-goes-on story about the consequences of late-stage capitalism. A world that sees people as tools—commodities, products, resources—won’t have to change much before it begins rebuilding and reshaping those people into more efficient tools or more useful resources. And people that can’t be reshaped and rebuilt? They’ll be tossed out for some other society (that of the enclaves) to fight over, like rubbish, like useless trash.

Further, in a world in which people are defined as tools and resources, people will come to understand themselves and others as tools and resources, too. In such a world, someone you can use is useful. Once you can’t use them, they become useless—they become rubbish, fit only for the trash bin. And the same is true of you, obviously. If you can’t be of use—if Caleb isn’t a hard worker, if he isn’t “jolly”—what right has he to anyone’s care?

It’s hard to focus on how grim The Enclave is precisely because Caleb is so “jolly.” His optimism, his determination to be in control of his own destiny, his relentless assertion that he will succeed no matter the odds, provides a kind of filter—a bright lens which hides the grim dystopia in which he lives. But in his world, there are no teams; there is no trust; there isn’t even really anything like a true culture. Everyone in the world of The Enclave is both alone and on their own. It is a doomed world.

The Enclave won the British Science Fiction Association award for short fiction last year, and Anne Charnock’s latest novel, Dreams Before the Start of Time (reviewed here at Strange Horizons), has been short-listed for the 2018 Arthur C. Clarke Award. Charnock is clearly a writer to keep your eyes on.

Like Loading...
© Copyright 2018 By: Kelly Jennings
About Kelly Jennings
Kelly Jennings has published short fiction in Daily Science Fiction, The Sockdolager, and Strange Horizons; her first novel, Broken Slate, was released by Crossed Genres Press. Read more about her at her blog, delagar.
No comments yet. Be the first!