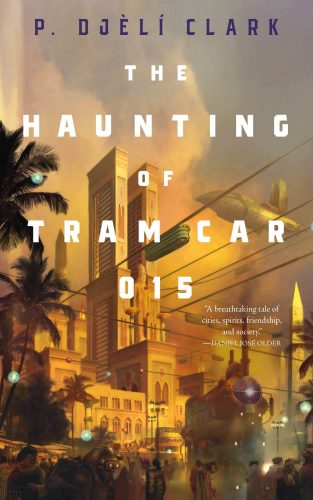 In an alternate, magical version of early twentieth-century Cairo, Agents Hamed Nasr and Osni Youssef, of the Ministry of Alchemy, Enchantments and Supernatural Entities, are faced with an unusual problem: the haunting of one of their city’s aerial tram cars. Beginning at the office of the Superintendent of Tram Safety & Maintenance at Ramses Station, their investigation sees them traversing a vibrant, multicultural city, encountering everything from boilerplate eunuchs and Egyptian suffragettes to black market candy importers and librarian djinn. Though a single haunting is usually a small event, the origins and repercussions of this particular one draw a path between different parts of Cairo, linking the mundane to the magical and the old to the new, the whole story taking place against a captivating backdrop of social change.

For such a slim volume, The Haunting of Tram Car 015 is an immensely satisfying and well-developed story. From the first page, Clark invites his readers into a fully realised version of Cairo: a flourishing, modern metropolis on an alternate Earth where a variety of magics, previously sequestered away from most of the world, were released en masse in the recent past, thereby fundamentally altering the global balance of power. Not only did this re-enchanting offer advantage to nations threatened by European colonialism, giving them new tools with which to defend their independence; daily life has also changed in innumerable small ways. Some such details are plot-relevant while others are more peripheral, but all of them are fully integrated into the setting, so that office-working djinn sit comfortably alongside modern pharaonic architecture and imported Armenian sweets.

Given the presence of goggles and gadgets in this version of 1912, the most obvious genre label for Tram Car is steampunk, but I’d argue that it’s just as much historical urban fantasy, in that magical Cairo feels like a character in and of itself. It’s the kind of setting that could easily support a much larger narrative – and indeed, I’m enthused to read the two other short pieces Clarke has written in this universe, though I’d also love to read more about Hamed and Osni solving magical crimes and mysteries – which is what makes its rendering in novella format all the more impressive. The characters are vivid and lively, even when their appearances are brief, and while the plot is technically straightforward—tram car is haunted; haunting is investigated; haunting is solved—what really makes the story work is the overall mood of history and zeitgeist.

If Tram Car can be said to have a single theme, it’s social change: not just along a single axis, but many. In big ways and small, the city is constantly influenced by the upcoming vote on Egyptian women’s suffrage, and while Hamed pretends to disinterest in politics, it feels like a self-deceptive claim when contrasted with the constant necessity of interacting with others in general and women in particular. Dining at Hamed’s favourite Nubian restaurant introduces the two investigators to Abla, a waitress and devotee of the goddess Hathor. Though initially put off by her forthright manner, Hamed is practical enough to accept Abla’s help with their investigation: unable to afford the services of a powerful djinn to evict what they believe to be a lesser spirit from the tram car, the agents are provided by Abla with an address for a (more affordable) sheikha who can perform the Zār, a traditionally feminine cleansing ceremony.

Meeting with the sheikha not only brings Hamed and Osni into contact with the Egyptian suffrage movement, but also with a gender-shifting djinn; an emancipated boilerplate eunuch, one of Cairo’s clockwork people; and a network of local women all seeking the Zār. Confronted with the reality of the ceremony’s widespread use despite his Ministry’s dismissal of its efficacy, ever-practical Hamed begins to rethink his biases; and yet that same pragmatism also forces him to acknowledge that, if the Zār did come under Ministry purview, many of the women involved would lose much of their present autonomy in practicing it.

It’s asides like this which make Tram Car so satisfying: at every step, the story feels like travelling through an established place, familiar yet unfamiliar, in which even small details are interconnected by virtue of being present. This thematic contrast reaches its peak when, after Sheikha Nadiyaa attempts the Zār, the inhabiting spirit is revealed to be not a djinn, but an al: a malevolent entity that preys specifically on pregnant women and new mothers. In a different story—indeed, in plenty of other stories whose magical elements are derived from real-world mythology—the misogyny inherent in the construction of such a creature would pass without comment; but as in all aspects of this novella, Clark knows what he’s doing, and rather uses the al both for thematic resonance and to give greater depth to his worldbuilding, all while asking questions about real myths and stories:

“Female in nature,” Abla repeated, unfazed by the litany. “And what does that mean to a spirit? You said it yourself, it was just some gray smoke before it took form. There are whole theories that claim spirit beings have no shape in our realms and take after the forms we give them in our stories.”

Osni inhaled in excitement. “You’ve been reading some of the recent Coptic philosophers’ applications of Thomas Aquinas’s studies of being to al-Jahiz’s writings on the djinn!” he exclaimed.

Abla merely wriggled her fingers. “I’ve dabbled. Here’s what I think. That spirit was just a formless being minding its own business. Then, it encountered men. And they decided to make it this beautiful woman or this monstrous crone, because that’s the only way many men can even view women. Maybe they were looking for a way to explain why their wives died in childbirth, or why infants died in their blankets. Maybe they were just afraid of old women. So, they made up this al, conjured it up as a woman, and blamed it on her!”

For all that Tram Car hinges on such philosophical and feminist questions—even while dealing with such a potentially monstrous creature as the al—the story itself is optimistic and deftly playful, finding humour in human foibles and the wry observations thereof. By the final page, I wanted nothing so much as to pick up the next instalment in what is sadly a non-existent series, though I wouldn’t be at all surprised if Clark returns to this setting in the future. The Haunting of Tram Car 015 is an accomplished, vibrant novella, and I recommend it without reservation.

Like Loading...
© Copyright 2019 By: Foz Meadows
About Foz Meadows
Foz Meadows is a genderqueer author, blogger, reviewer, poet, three-time Hugo nominee for Best Fan Writer, and winner of the Norma K Hemming Award. Her most recent novels, An Accident of Stars and A Tyranny of Queens, are available from Angry Robot Books. Though Australian, she currently lives in California.
No comments yet. Be the first!